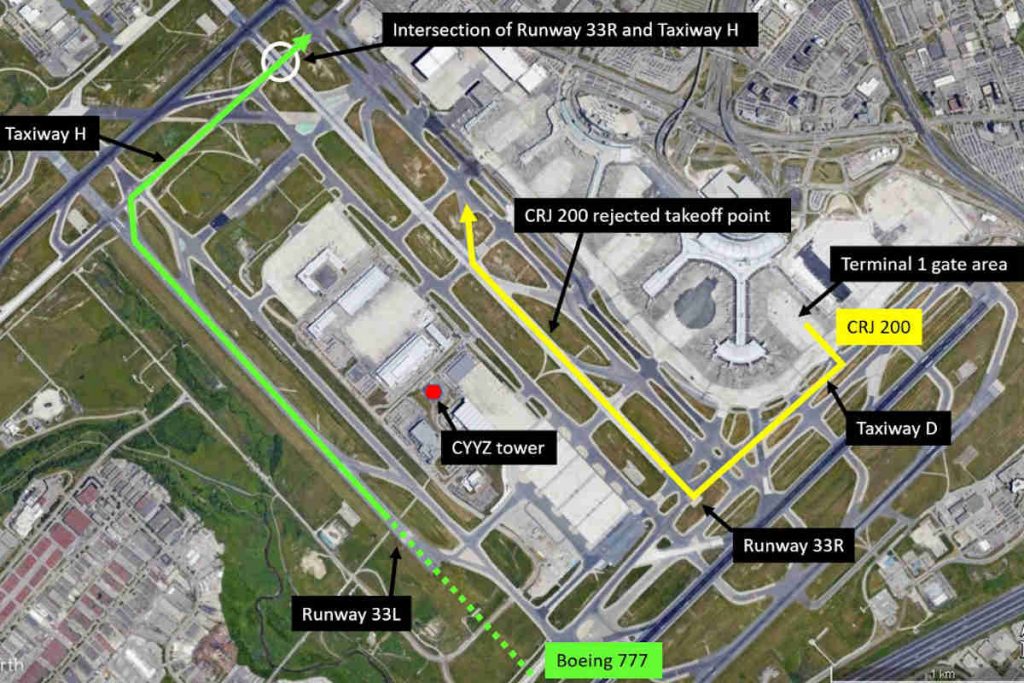 Transportation Safety Board of Canada released its investigation report (A19O0117) into the August 2019 runway incursion between two aircraft at the Lester B. Pearson International Airport in Toronto. There were no injuries in the occurrence, which stemmed from misinterpreted ATC communication.

Outlining the runway event, Transportation Safety Board (TSB) explains that on August 9, 2019, at 12:40 pm EST, an Air Canada Boeing 777-300 landed on Runway 33L. Three minutes later, an Air Georgian Bombardier CRJ 200 was instructed to line up on parallel Runway 33R.

Based on air traffic control (ATC) instructions, explains TSB, the 777 was crossing Runway 33 as the flight crew of the CRJ 200 began its take-off roll on the same runway without a take-off clearance. TSB explains the CRJ 200 flight crew then rejected the takeoff and exited via a taxiway after seeing the Boeing 777 over the crest of the runway.

TSB states its investigation found, that while completing the pre-departure checks, the flight crew of the CRJ 200 was informed of a change in departure instructions. The first officer received and read back the line-up instruction with the departure amendment, according to TSB’s investigation, but misinterpreted that ATC communication as a clearance for takeoff.

It was subsequently determined by TSB that the number of pre-departure tasks the flight crew was required to complete within a short amount of time increased their workload; and that the workload was further increased by the additional tasks brought by the change in instructions. As a result, TSB found that the increased workload, the expectation to receive a take-off clearance without delay, and the misinterpretation of the line-up instructions led the CRJ 200 flight crew to initiate take-off roll without a take-off clearance.

TSB also points to the grade profile of Runway 33R, which resulted in the fuselage of the Boeing 777 not being visible to the CRJ 200 flight crew at the start of the take-off roll. TSB’s investigation did not determine that fatigue affected the performance of the flight crew in this occurrence, but the agency noted the challenges of backward-rotating shift schedules for pilots, including those involved in this event.

TSB notes that NAV CANADA, following the occurrence, issued a directive reminding air traffic controllers to cancel the take-off clearance or issue an instruction to abort takeoff when runway incursion monitoring and conflict alert system stage 2 alerts are activated by a departing aircraft.