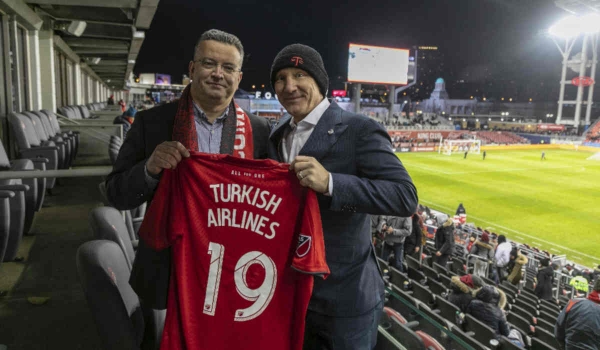 Zafer Bolukbasi, general manager, Toronto, for Turkish Airlines and Bill Manning, president, Toronto FC. (Photo: Turkish Airlines)
Turkish Airlines has signed on as the official airline partner of Toronto FC of Major League Soccer for 2019. This is the airline’s first sponsorship deal with a Canadian major league sports team, expected the agreement to generate greater brand awareness in Canada.
Turkish Airlines presently flies to 306 destinations worldwide and will soon be based at the brand-new Istanbul Airport, which began limited flight operations in October 2018. Istanbul Airport is will be one of the largest and most modern airports in the world.

“We are proud to partner with a world-class brand like Turkish Airlines,” said Jeff Deline, chief revenue officer at MLSE. “This partnership exemplifies the international reach that Major League Soccer provides our fans from around the world and will help connect them to our team here in Toronto.”

Turkish Airlines Toronto General Manager, Zafer Bolukbasi said, “We are very delighted to become Toronto FC’s official airline partner. As the airline that bridges continents and cultures all over the world and believes in sport’s uniting potential among world societies, Turkish Airlines continues to partner with the best athletes and sports clubs in the world.”