One of my childhood dreams was to be a pilot in the Canadian Air Force. 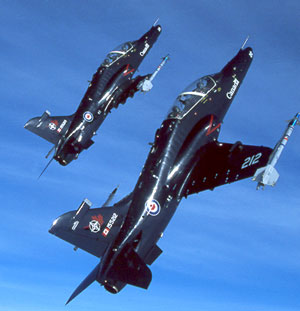 My pilot, Capt Marcus Walton, and I – muffled with our ‘bunny pants'
on, G-suits fitted snugly underneath and helmets tucked under our arms
– strut out to our CT-155 Hawk, used in the much-talked-about NATO
Flying Training in Canada (NFTC) program. With us are Royal Air Force
instructor pilots F/L Brett Archer and F/L Nigel Edwards and their RAF
student pilots F/O Dickie Aboboto and F/O Duncan Laisney. Wearing all
that equipment they look like veterans, despite their youth. They are
survivors of a long selection process that began in the UK. They went
through earlier phases of the NFTC program at Moose Jaw, Saskatchewan,
and are now in the middle of Phase IV, the fighter-lead-in phase of
NFTC, with 419 Tactical Fighter Training Sqn at Cold Lake, Alberta.
This is the last hurdle before they realize their dream of becoming
full-fledged members of the British fighter squadron community.

One of my childhood dreams was to be a pilot in the Canadian Air
Force. But instead I'm in the back of a BAE Systems Hawk 115 with
camera in hand for a defensive 2v1 Air Combat Manoeuvring (ACM) mission
– fighter lingo for two friendlies against one attacking bogey. Today
we're simulating a MiG-21. Sitting in the cockpit, everything from my
two- The CT-155 Hawk is specifically designed to meet the training
requirements of today's new generation of fighter pilots. Issue 4, 2002
WINGS Magazine 41 hour safety briefing – what to touch and not to
touch, the ejection seat, parachute procedures, how to breathe when
pulling high-G manoeuvres – comes into play in this tiny cockpit on
this -25°C February day.

Sitting in the back seat of the aircraft I quickly noticed that this
variant, the Candianized Hawk 115, is specifically designed to meet the
training requirements of today's new-generation fighter pilots who will
proceed to advanced frontline aircraft like the Eurofighter Typhoon,
Tornado, CF-18, F-16 and eventually the JSF (Joint Strike Fighter).
With an advanced cockpit that includes a Multi- Function Display (MFD),
Hands-on- Throttle-and-Stick (HOTAS) controls and a Head-Up Display
(HUD) it looks and feels like any advanced frontline fighter.

The British pilots in the Hawks next to us have finished going
through their checks as lead taxis out. This will be an intense sortie
for the RAF students; it's their first 2v1 mission where they have to
employ their new Basic Fighter Manoeuvres (BFM) skills working with a
wingman, which means they'll have to be able to talk and fight at the
same time, as well as coordinate their wingman's actions.