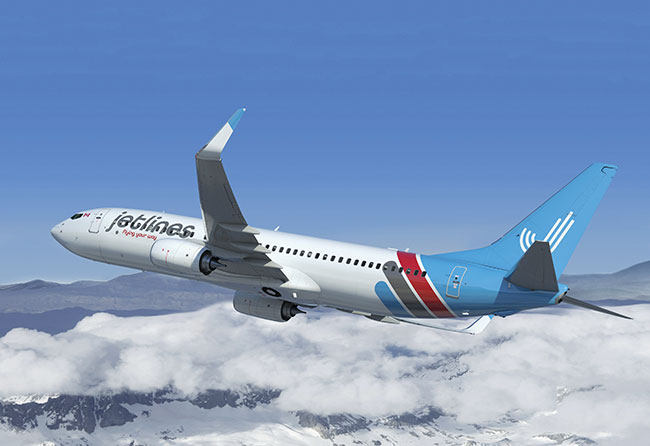 Canada Jetlines will use Vancouver International Airport as its home base and also leverage Hamilton International to compete with the likes of Swoop. PHOTO: Canada JETLINES

There is no other country in the world except Canada where two airlines control 80 per cent of the market. But that is about to change with at least four ultra-low-cost carriers (ULCCs), namely Canada Jetlines, WestJet’s Swoop, Flair and Enerjet, vying to disrupt that duopoly. They may find comfort in the fact that ULCCs have 30 per cent market share in the United States, according to Javier Suarez, CEO of Canada Jetlines, who has more than 15 years experience in the business, most recently as vice president, network planning, with ULCC carrier VivaAerobus of Mexico.

However, Flair in February suspended several routes to Florida and California just months after expanding service to U.S. destinations due to disappointing load factors.

It halted service from Edmonton, Winnipeg and Toronto to destinations including Miami, Tampa Bay and Palm Springs.

“There is plenty of room for ULCCs to gain 15 per cent market share in Canada,” Suarez explains, during a presentation at the Routes Americas 2019 Conference in Quebec City in February, the first time the conference has been held in Canada. It was attended by some 800 delegates representing 80 airlines, 300 airports and 50 tourism organizations.

Why have there not been any ULCCs in Canada until now, Suarez asks? He said airport taxes might be a factor, but they are higher elsewhere and more than five million Canadians cross the border each year to get better deals.

“There have been a few attempts in the past, but they were not using the right type of aircraft or didn’t have the right management or carriers simply wanted to beat Air Canada on service, which is not the right approach. There are only legacy carriers and regionals operating in Canada, while there are three LCCs in Australia, which has a smaller population.”

With foreign ownership limited to 49 per cent of a domestic airline, it should be easier to start a low-cost carrier in Canada than elsewhere, especially with a receptive market of travellers crossing the border looking for cheap flights, coupled with Canada’s relatively high GDP per capita, notes Suarez.

“Focusing on being the lowest-cost operator should give us a competitive advantage and be the most profitable ULCC, similar to Ryanair in Europe and Spirit Airlines in the U.S. We will leverage a lot of new technology and offer personalized service. There is a difference in service levels when travelling between Toronto and Vancouver and Toronto to Cancun, for example.”

What is Jetlines’ game plan? It won’t be paying pilots $200,000 like Air Canada and in an era of a pilot shortage, it hopes to attract new recruits with a quality of life that allows most personnel to be home every night. “And by joining a new airline, pilots will move to the left seat pretty quickly.”

There will be a need for about 117,000 new pilots in North America alone over the next 20 years, but Jetlines already has over 200 resumes, notes Suarez.

As for its route network, Jetlines will use Hamilton International Airport as a major base, as well as home base at Vancouver International Airport (YVR), to enable it to compete with Swoop. It will operate domestically year round and fly to the southern U.S. and Mexico during the winter. Suarez also believes Quebec City is a very underserved and promising market.

In April, Canada Jetlines set a launch date of December 17, 2019, for its commercial airline service to begin out of YVR.

Looking three years ahead, people realize it’s a great opportunity for ULCCs in Canada as long as they don’t jump in and out of different routes and Canadian airports aren’t as expensive and some people believe, says Suarez.

Five years from now? “I don’t think Flair [which started as a charter airline] will be around or Swoop. An airline within an airline has its limitations and [Air Canada’s] Rouge can’t stop us from growing.”

Swoop has also hired a person with experience in its president Steven Greenway, an Aussie with more than 20 years under his belt with stints in a number of LCCs, including Peach Aviation of Japan, Virgin Blue, Virgin Atlantic and Qantas. Why did he accept the challenge of running Swoop which began operations last summer?

“I held WestJet in high regard and Canada was one of the last developed markets without low-cost carriers. Maybe it’s because the average stage length east to west is six hours which means you get less utilization which makes it expensive to operate in Canada which also has some of the highest airport and air traffic control fees in the world.”

There are so many airlines that have gone out of business and others coming into the market that it will be interesting to see who will survive, says Greenway. It’s not the utilization of aircraft, but the number of departures that’s important. There are few opportunities for short stage operations in Canada with most flights being three to four hours. The second shortage stage flight at two hours is Hamilton to Halifax. By comparison there are several two hour flights in Europe.

Asked why WestJet needed to launch an LCC, Greenway said it was part of the maturation of the airline, which is going after the corporate market dominated by Air Canada. “We’re looking at the lower end of the market since a huge part of the population still doesn’t fly. Two million Canadians flew out of Buffalo last year and WestJet can’t [work the numbers economically to] stem that market.”

Swoop hopes to have 10 Boeing 737-800 aircraft in its fleet by yearend, up from its current seven 737s. Based in Calgary, it flies to 19 destinations in Canada, the U.S., the Caribbean and Mexico on a seasonal basis. Its mandate is to focus on secondary markets like Hamilton and London, Ont., where WestJet doesn’t serve or under serves, says Greenway. Swoop could eventually serve Europe and Hawaii, he adds.

Swoop hopes to succeed by coordinating its network with WestJet by ensuring they are complementary and buying fuel and aircraft from WestJet at a discount.

“There’s a fine line between an integrated and smooth operation. The biggest mistake is to meld two cultures. For example, we don’t use WestJet employees to check in our aircraft. We have a common bargaining unit, but two different contracts. Swoop’s value proposition is price which is key. And all interaction with Swoop is digital interaction.”

While Canada has been a “graveyard” for many airlines, Greenway doesn’t agree with Jetlines’s Suarez who predicted Swoop won’t be around in five years, noting it had already sold 100,000 tickets when it only has two aircraft in its fleet.

“We see Flair hanging around, while Jetlines has been talking for the last two years, but hasn’t launched. Enerjet [a charter operator planning to launch as an ULCC this year] plans to operate on the international market which will be more of a competitor for WestJet and Air Canada. Swoop is focused on economies of scale and I doubt we’ll go into the main markets, because they’re too congested.”

Keynote speaker Ferio Pugliese Sr., VP regional markets and government relations, Air Canada, noted how his airline has grown in the last 10 years, from 19 million passengers in 2009 to 32 million passengers today, while its share price has risen from $1 to $34 during the same period.

“We are ready to become a global champion with an improved balance sheet from our investment in capital and people to reduce costs. Our 737-8 Max has increased our range, the [former CSeries] A220 has opened new opportunities and we’ve doubled down on the 777, giving us one of the most fuel efficient fleets in the world. In fact, it is 40 per cent more fuel efficient than it was 25 years ago.”

Air Canada Rouge, Express and mainline has given the carrier increased flexibility, noted Pugliese. Rouge targets leisure markets with 70 destinations using a fleet of 23 A-319, 320 and B-767 aircraft. Air Canada Express is the airline’s workhorse, servicing Montreal, Toronto and Vancouver hubs and carries a third of the airline’s passengers.

“Since 2015, we’ve opened 85 new international and trans-border routes. We’ve also invested heavily in our business class lounges and reacquired Aeroplan. The result? Our share price has increased 3,500 per cent since 2009 and over $7.5 billion of value created.”

Those numbers could be better, but a regulatory burden is slowing growth, states Pugliese. He notes the airline industry is one of the highest taxed industries in the world and high fees in Canada continue to lure travellers across the border. The net result is the cost of air travel in Canada continues to go up.

While the number of tourists to Canada continues to grow, we have gone from a Top 10 destination in 2000 to number 18 today, according to Minister of Tourism Mélanie Joly. She wants to get back to a Top 10 destination by tapping into winter festivals, promoting gastronomy, targeting the LGBT community and promoting Canada’s indigenous population.

A national tourism strategy is being developed with the objective of increasing tourism dollars from $21 billion in 2017 to $46 billion and the creation of more than 200,000 new jobs by 2030.