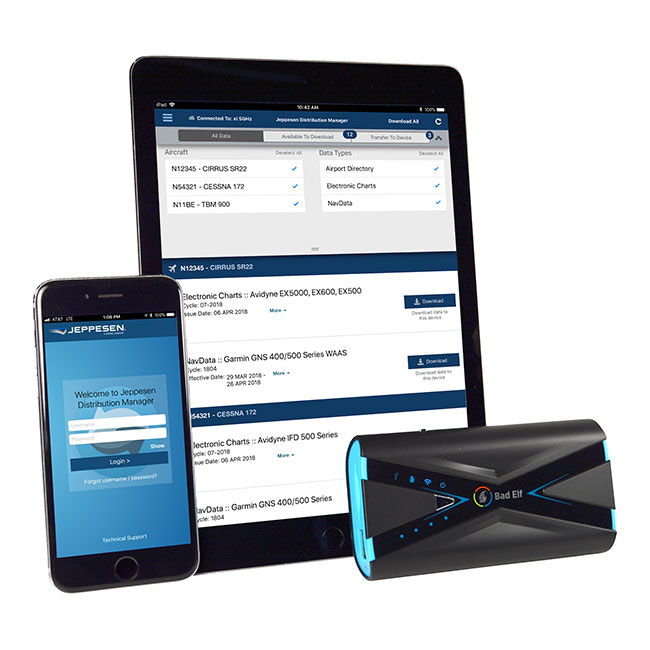 Aviation and avionics have come along way over the past 20 years. The cluttered panels of endless analog dials and gauges of yesteryear have been replaced by a few flat glass (Primary and Multi Function Displays). Modern panel architectures and designs simplify and concentrate data enhancing the flight crew’s integration with the aircraft’s systems, taking workflow, scans and ergonomics into consideration. For the purposes of this article “flight decks” (FD) will be used to encompass all aircraft systems which contain data and databases.

Data from the aircraft systems can be downloaded from the FD to the cloud or a IT device for access by applications to facilitate day-to-day maintenance and troubleshooting. A variety of connections from physical cards, Wi-Fi, Bluetooth and satellite data networks can be used to offload data from the aircraft.

Digitalized aircraft store data on their systems, which provides pilots, owners and mechanics insight into the operation and maintenance of the aircraft. Through reviewing and analyzing this increasing amount of data, owner/operators can improve the manner in which the aircraft is operated with the goal of protecting and improving the lifespan of critical systems like the engine and reducing the probability of Aircraft on Ground (AOG) time, impacting costs or lost revenue caused by hardware faults.

Many digital instruments are, in fact, purpose-built computers, requiring updates essential to safeguarding their operation. Not unlike oil changes, owner operators should stay abreast with the maintenance upgrades and updates which the hardware manufacturers publish. FDs, instrument and database providers use a variety of technologies and applications to move data back and forth.

Some country’s air navigation services will not allow an aircraft to depart into or transit through their airspace if the aircraft does not have the latest navigation databases installed. This can cause economic impacts as the aircraft is AOG while waiting for the update. As such, some flight departments avoid this economic and process challenge by equipping the aircraft with a laptop computer to facilitate the update process.

Generically, the FD database update process may require a laptop or tablet computer. Various FD manufacturers and data suppliers, such as Jeppesen, have different requirements. Some flight departments leverage their maintenance personnel or flight crews to accomplish the update task. When the aircraft is away from its home base, at the time the database update is due, flight crews will require a laptop, application login credentials and Internet connectivity.

The logistics surrounding the update process should be considered. In a multi-aircraft and multi-crew scenario, for example, is the crew’s laptop used, is the laptop corporate issued (and controlled) or is a bring-your-own-device (BYOD) practice utilized? Does the crew have access to the database download Website? Does the database update device comply with your corporate IS/IT (information systems, information technology) security procedures and practices? From a corporate security perspective, what happens when crew turnover occurs? Should the airplane have its own laptop and what is the impact to total cost of ownership of the IT asset? These factors should be taken into consideration when developing and updating your tactical aircraft data update plan. Not only does the aircraft’s data driven systems require updating and managing, but so does the technology driving the update process.

Many FDs allow for two copies of the databases to reside on the FD, the current databases and the next-time periods databases. Different FD, FMS and Nav/Com hardware use different processes and hardware (DVD, USB stick, Web, Microsoft Windows, Apple iOS, and SD Card) to facilitate the updating process. Once the new database update is downloaded to the medium supported by the specific aerospace hardware manufacturer, the updating process will be initiated on-board the aircraft.

Download managers require minimum computer operating system requirements, with an outcome of more computer hardware to keep up to date or replace. Aircraft database containers add more complexity to managing the fleet’s databases. For example, Garmin’s GNS 530/430 data cards are proprietary, use a non-standard writer and have three different card types, denoted by Green, Silver and Orange labels, based upon the specifics of the GNS530/430 (WAAS and non WAAS). Jeppesen’s Skybound writer adapter is tied to the type of cards. A Skybound G2 silver tagged adapter is not able to update Garmin orange data cards. Garmin’s USB Aviation Data Card Programmer will program Garmin navigation, obstacle and terrain databases, but is not compatible with Apple’s Mac operating systems or Jeppesen Skybound adapter, adding more complexity to the process.

Many aerospace manufacturers have created applications to facilitate laptop and tablet integration into their panels to support the uploading and downloading process. Garmin’s database Concierge, part of its Connext ecosystem, utilizes an iPad or Android device running Garmin Pilot to push database updates to its GTN or GTN Xi series touchscreen navigators and FDs. Wi-Fi or Bluetooth integration into its avionics suites is accomplished with Garmin’s Flight Stream 510 multimedia card.

Bad Elf’s Wombat is designed to make the updating process simpler on specific aircraft hardware. The Wombat is a piece of hardware, about the size of a power vault. With USB, SD card ports and an App, flight crews are able to update their aircraft systems without the necessity of bringing the cards back to base, relying on a laptop or the airport’s Wi-Fi connections. Using Jeppesen Distribution Manager Mobile, update files can be downloaded onto a tablet at home, hotel or the office using a high-speed connection.

At the aircraft, simply pop the card out of the navigator and insert it into the slot on the Wombat. For Garmin 530/430s, the Jeppesen Skybound adapter will be required. The Wombat and JDM Mobile will not update Garmin obstacle and terrain databases. The Wombat is a multi-tool product, which is able to upload data from SD or USB sticks directly into Cloud based management tools like Savvy Analysis, MyTBM and Cirrus Reports. Wombat for piston aircraft retails for US$249.99 (one-year warranty) and $499.99 (three-year warranty) for the turbine version.

Electronic Flight Bags (EFB) and their hardware should be considered as part of the aircraft’s digital update process. EFB applications like ForeFlight, Garmin Pilot, WingX and portable GPS, should be updated before you fly. The amount of data to be downloaded will depend upon the states, provinces, and chart types selected in the EFB. As an example, ForeFlight would require 63 GB of storage space to store The America’s and Europe.

The initial download would require 1.5 hours at 100 Mbps, but all subsequent data cycles will require significantly smaller download sizes due to ForeFlight’s Delta Downloads process: By only downloading the charts that have changed with the new cycle, ForeFlight can reduce the size of subsequent downloads to 20 per cent or less of the original. If you do not plan on downloading all of the U.S. or Canada, a good rule of thumb for the U.S. is that each state requires, on average, 480 MB to download all content. Larger states like Texas or California will require more space, and Alaska alone takes up around 4.5 GB of space. Canada requires, on average, 950 MB per province or territory with all available items selected. Larger areas like Nunavut will take up about 3.5 GB of space. Foreflight’s pack feature analyzes your route of flight and downloads only the charts and data required for the flight which have changed. For a one-time cross-country flight, iPad space can be efficiently managed through downloading only the databases required for the flight.

Executing the download process when the flight crew has access to a high-speed, quality broadband Internet connection will allow the updating process to run quickly without loss or corruption of data. Most EFBs, FD and FMS systems allow the current and next database cycle to be stored, permitting convenient access to high speed broadband networks to be used to accomplish the next cycle’s download.

Keeping your aircraft’s avionics, digital instruments and smart device’s data, operating system and applications up to date is a fundamental safety requirement. Having up-to-date information in the cockpit is not only a regulatory requirement, but improves the probability of a safe outcome. | W