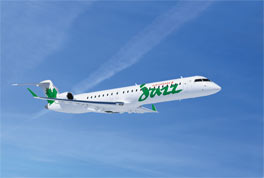 The signing of this contract, which is expected to generate approximately US$170M over the seven-year term, is an example of Vector’s strategy to continue to build long term partnerships with its customers. The PW100 series engines are part of Vector’s engine services portfolio which includes both fixed wing and rotary applications for products from the world’s leading aircraft OEMs.

Declan O’Shea, President and Chief Executive Officer of Vector Aerospace, said: “We are delighted to establish this long term relationship with a great company like Jazz. We are firmly committed to deliver on our promises to all our customers and continue to build an organization which is a leader in the global MRO industry.”

Vector Atlantic President, Brian Thompson, said: “Vector Atlantic has a long history of serving the PW100 turboprop market. We have built our reputation on listening to our customers needs and providing industry-leading customer service. Our entire team is committed to serving Jazz, a leader in the regional airline market, and an operator of one of the largest PW100 series engine fleets in the world.”

Vector Aerospace Corporation is an independent provider of aviation repair and overhaul services. Through facilities in Canada, the United States, the United Kingdom and Africa, Vector provides services to commercial and military customers for various types of gas turbine engines, components and helicopter airframes. The Company has approximately 2,500 employees.