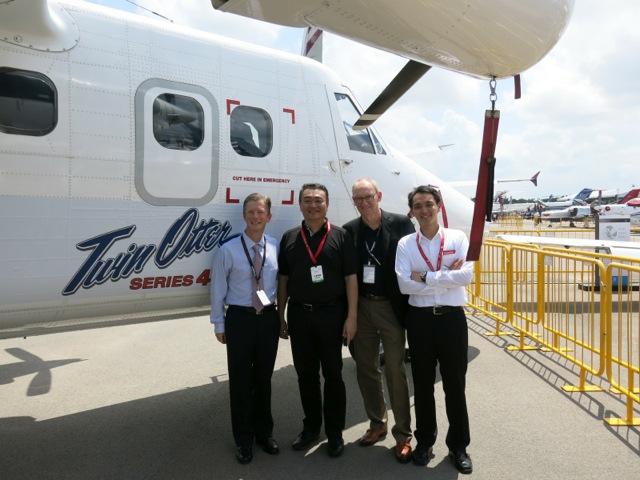 The four Viking manufactured Series 400 Twin Otters will be delivered during Q2 and Q3, 2016 and will replace three Do228s currently operated by Daily Air under a Taiwan government contract to provide essential air services to five offshore islands along the southern coast of Taiwan. The Twin Otter Series 400, with its excellent performance capabilities, was selected as the replacement because of the aircraft’s proven history of operational reliability and economics required for the restrictive operating conditions and short runways on several of the islands being serviced by Daily Air.

Daily Air has been operating the EAS routes since 2005, and their bid to renew their services contract with the Taiwan CAA for another ten years will be supported by CAVU and Viking Air Limited with provision of new aircraft, training, and spares support as the aircraft enter service later this year. Two of the four Series 400 aircraft were delivered to CAVU Aviation Finance in 2013 and 2015, and the remaining two will be delivered new from the Viking factory in June. These will be the first Series 400 Twin Otter aircraft operating in Taiwan.

Matthew Lorentzen, President of CAVU Aviation Finance LLC, said “We are pleased to support Daily Air in their successful bid to renew this essential service. The Twin Otter has an unparalleled record of success in this type of operation and Daily Air’s experience will ensure a smooth entry into service for the aircraft. We also appreciate the excellent pre- and post-delivery support from Viking Air Limited. As an original launch customer and leasing partner for the Twin Otter Series 400 program, we are proud to have placed eleven Series 400 Twin Otters into service with eight international customers since 2011. We look forward to continuing to support the growth of the Series 400 family with creative aircraft financing and acquisition solutions.”

Mark Kuo, President of Daily Air, said “Daily Air has operated the routes between Taiwan and the offshore islands for more than ten years, with 24 scheduled flights per day. After a three-year evaluation, Daily Air determined that the most appropriate aircraft type for the next ten years is the Twin Otter Series 400. The operation of the essential air service is an important part of the Taiwan Government’s policy to support the inhabitants living on the offshore islands. Daily Air is very honored to cooperate with the Government to provide more reliable and safer air transport service with an entirely new fleet for the offshore islands residents. Daily Air is also very happy to establish a long-term partnership with CAVU and Viking to further expand the Asian market for the Canadian-built Twin Otter Series 400.”

The Twin Otter Series 400 on display at Viking Air’s Chalet (MSN874) during the Singapore Air Show will be one of the four aircraft leased to Daily Air by CAVU Aviation Finance.