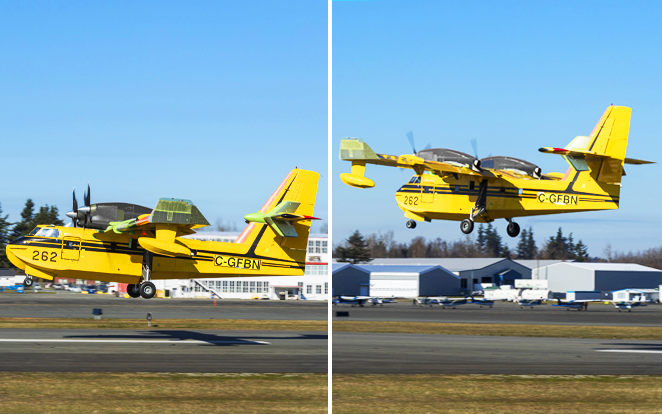 The first production CL-415EAF Enhanced Aerial Firefighter, MSN 1081, is the first of six such aircraft ordered by Bridger Aerospace Group of Bozeman, Montana, and will be delivered in April in advance of the 2020 wildfire season. (Photo: Longview Aviation)

Cascade was awarded a contract to assist with the CL-415EAF modification program in 2018 that included carrying out the first aircraft modification using Viking-supplied conversion kits and providing on-site process training to LAS personnel.

This initial CL-415EAF is the first of six amphibious aerial firefighters ordered by launch customer Bridger Aerospace Group (Bridger Aerospace) of Bozeman, Montana, and is scheduled for delivery in April in advance of the start of the 2020 North American wildfire season.

“This is a significant milestone for the CL-415EAF Enhanced Aerial Firefighter program that wouldn’t have been possible without the focus, hard work and dedication of the entire team,” said Don Boitson, president and COO for Longview Aviation Western Operations. “With the conversion kit manufacturing support from Viking, the technical production expertise of Cascade, and the project management team at LAS, we have collaborated to produce the best-value amphibious firefighting aircraft available on the market today.”

LAS explains the Viking CL-415EAF modification program forms part of a staged approach to utilize the advancements made with the LAS converted aircraft as the basis for the proposed next-generation Viking CL-515 new-production aerial firefighting and multi-purpose amphibious aircraft.

The Viking CL-415EAF represents the evolution of the type, explains LAS, utilizing the higher delivery 2-door water drop system combined with a zero-timed maintenance program and a “new aircraft” factory-supported warranty program. All obsolete components impacting the worldwide fleet of CL-215 and CL-415 aircraft are replaced in the CL-415EAF, and the upgraded aircraft is designed to failsafe FAR 25 certification criteria with no preset life limit. LAS also explains the very short scooping distance of the CL-415EAF aircraft is expected to outperform competitors from initial attack to sustained major fire suppression.

Located at the Calgary International Airport, Longview Aviation Services (LAS) was established in 2018 in partnership with Viking Air Limited to launch the CL-415EAF aircraft upgrade and modification program.