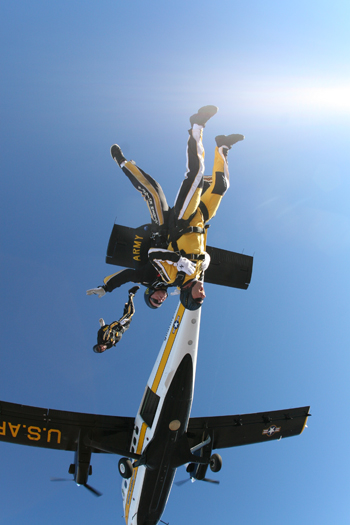 The Golden Knights, established in 1959 as the official U.S. Army Parachute Team, becomes the 9th operator to purchase Viking’s new Twin Otters. They will replace the team’s existing fleet of two Twin Otter Series 300 (UV-18 in Army designation), purchased new by the US Army from de Havilland Canada in 1979; and one Pilatus Porter.

“Our two original Twin Otters have been serving the US Army since 1979, first in the remote tundra of Alaska as ski planes, and since 1997 with the Golden Knights parachute team, providing flawless support for thousands of demonstration, competition and tandem jumps”, says Green Beret Lieutenant Colonel Tony Dill, Golden Knights’ Commander. “This is a superb aircraft, with a lifetime of service to the US Military and nearly 10,000 hours and 18,000 landings with the Golden Knights. It provides an efficient jump platform; short time to climb; and the capacity to accommodate 16 jumpers at the same time. We are confident that our new airplanes will provide outstanding support to the US Army for years to come.”

Delivery of the first new aircraft will take place in 2010, with the remaining two delivered in 2011.

“Being awarded this contract is great news for us; it confirms our belief in the performance and qualities of the Twin Otter”, says David Curtis, president of Viking. “We are glad it has been chosen once again by the Golden Knights, as we believe that this aircraft and its enhanced performance are a true match for the team’s competitive spirit and mission.”

Stationed at the "Home of the Airborne", Fort Bragg, North Carolina, The Golden Knights are 90 soldiers that come from diverse backgrounds and have been trained in one of the 200 military occupational specialties the Army offers. Considered the most successful U.S. Department of Defense sports team, the Golden Knights perform aerial demonstrations for the public and in promotion of the Army's public relations and recruitment efforts; compete in national and international parachuting competitions; and test new parachuting equipment and techniques for improved operation and safety.

"As we approach the 50th Anniversary honoring the legacy of excellence for the members of the US Army parachute team, we are pleased to recognize the award of the new aircraft acquisition to Viking Air, and would like to recognize all those who assisted in the acquisition process, and particularly the Army's aviation experts at the Fixed Wing Product Office in Redstone Arsenal, Alabama." Dill added.

“Our aircraft have also transported such icons as former President George H. W. Bush, actor Chuck Norris, golf legend Tiger Woods and the Dallas Cowboys cheerleaders – each made their first jump with the US Army from one of our Twin Otters.”

Incorporated in 1970, Viking Air Limited has established itself in the aviation community as a high-quality aerospace manufacturer and an aircraft modification, sales, leasing and repair facility.