Expectations for Le Bourget were marginal this year as customer airlines begin digesting a backlog of eye-popping orders from previous shows. The media were already reporting on a scaling back of display space by exhibitors and cutting back on the mountains of nosh, rivers of booze and other freebies that traditionally accompany the world’s largest air show. 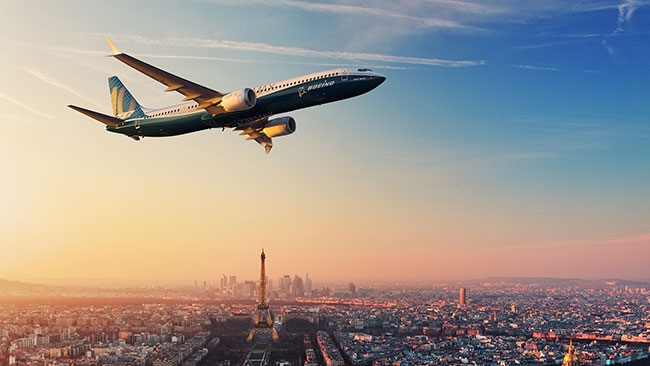 The 737 MAX 10 launched with 361 orders and commitments from 16 airlines and leasing companies. Expectations for Le Bourget were marginal this year

Still Paris was not to be outdone, delivering a civilian order book that was larger than Farnborough last year, and roughly equal to its own output in 2015.

“We are concluding the air show with solid momentum, and I am very pleased with the level of interest and activity we are seeing in all of our aircraft programs,” Fred Cromer, president of Bombardier Commercial Aircraft said.

Bombardier pocketed orders and options for 60 Q400s turboprops, including up to 50 of the extra-capacity, 86-seat version by SpiceJet, an Indian-based low-cost airline. Based on list price, the completed order would be valued at up to US$1.7 billion, making it the single largest order for the Q400. PAL Express, a subsidiary of Philippine Airlines, was the launch customer for what has been billed as the world’s first 86-seat dual class airplane. PAL, which took delivery of first of four aircraft in July, firmed up orders for an additional seven Q400s in Paris.

“With our unique product portfolio, we are the leader in the market segment below 150 seats,” Cromer said, adding that Bombardier is also meeting market demand for larger and higher-performance turboprops.

Less successful were new orders for the C Series, although Russia’s Ilyushin Finance and Co. (IFC) finalized a “framework agreement” for the lease of six CS300 aircraft with an undisclosed airline. IFC ordered 20 CS300 in 2013.

Bombardier had arrived in Paris with a CS300 in the colours of launch customer, airBaltic. Bombardier was also armed with almost a year of performance data since the CS100 entered service with SWISS. The airplane builder had delivered 14 C Series aircraft to SWISS and airBaltic by the opening of the show, with both operators reporting that entry into service went smoothly and the aircraft was beating performance expectations, including fuel burn.

“Our flight operation performance with the CS300 jet airliners is exceeding expectations,” Martin Gauss, chief executive of airBaltic said shortly after the larger aircraft had entered service. “The smooth operational performance is complimented by a lot of positive feedback that we receive from our customers and the improved flying experience.”

“As the momentum continues to build up following the successful first year in service of the C Series aircraft, we are pleased that airlines around the world are demonstrating growing interest as they witness the C Series performance and hear about the overwhelming positive feedback from passengers and our launch operators,” Cromer added.

P&WC has a long-standing relationship with AVIC dating back to the late 1980s, when the PT6 engine was selected to power its Y12 utility aircraft. The engine maker has also supplied PW127J engines for the MA60/600 aircraft, based on the Antonov An-24. To date, more than 100 MA60’s have been delivered to operators in China and elsewhere.

The MA700 will be the world’s first fly-by-wire turboprop. The PW150C engine control will be integrated with the aircraft’s avionics and controls system to reduce pilot workload. It will offer enhanced dispatch availability and reliability in the hot and high environments of western China.

“Enhancements we have built into the PW150C engine include advanced high-efficiency technologies, materials and manufacturing processes, including a third-stage power turbine, a modified reduction gearbox to support the aircraft’s larger-diameter propellers and an optimized low-pressure compressor,” said Frédéric Lefebvre, vice-president of marketing for P&WC.

The low-cost MA700 is being pitched to airlines in Asia and Africa that operate with lower load factors to connecting hubs. Engine certification is on target for the end of 2019 to support the new regional turboprop’s entry into service in 2021.

The 737 MAX 10 launched with 361 orders and commitments from 16 airlines and leasing companies.

Boeing the toast of Paris
But it was the launch of the Boeing 737 MAX 10, the largest member of the best-selling MAX family that really stole this year’s show, and propelled Boeing ahead of Airbus in show orders and commitments for the first time since 2012. The airplane launched with 361 orders and commitments from 16 airlines and leasing companies. Approximately 200 of those orders were from customers like United Airlines that swapped existing MAX commitments for the larger airplane.

“There’s no doubt the 737 MAX 10 was the star of the Paris Air Show,” Doug Alder, a Boeing spokesperson told Wings. “A lot of people were predicting the Paris show would be fairly sleepy this year, but the MAX 10 really shook things up. The customers who have already signed up represent some of the top airlines and leasing companies around the world.”

The 737 MAX continues to be the fastest-selling airplane in Boeing history, accumulating more than 3,700 orders to date. However, the type has struggled against the Airbus A321neo, the largest member of the A320neo family. It appears that Boeing has closed the gap.

Design changes for the MAX 10 include a fuselage stretch of 1.68 metres compared to the 737 MAX 9, and capacity to carry up to 230 passengers. “Our customers told us to build it bigger and build it better,” Alder said. “The MAX 10 will be the largest and most efficient member of the MAX family. It has a five per cent seat cost and trip cost advantage over our competitor. Simply put, it will be the most efficient single-aisle airplane in the world.”

Neither Air Canada nor WestJet, have indicated they will swap out a portion of existing MAX orders for the larger model. “This airplane is designed for airlines that need more capacity,” Alder pointed out. “The preference for a specific model really comes down to what a particular airline needs. With the MAX 10, you gain new capacity. With the MAX 9, you have range. With the MAX 8, you’re in the heart of the market and with the MAX 7, you get an airplane for longer, thinner, high-hot routes.”

The MAX 10 will have a range of 5,954 kilometres, further than a standard A321neo but approximately 1,500 kilometres less than the A321neo long-range (LR) that recently made its North American breakthrough with an order from Air Transat (see On the Fly). But the LR carries three auxiliary fuel tanks, reducing cargo space, and has more take-off weight.

Still, the market remains alive for the so-called middle-of-market (MoM) aircraft to replace the Boeing 757, almost 14 years after production ended on the long-ranger twin jet. While in Paris, Kevin McAllister, chief executive of Boeing Commercial Airplanes told the London Financial Times that the market for such an airplane could be close to 4,000 – much higher than previous estimates, including an earlier Boeing forecast of 3,000 jets. “We see size of the market is maybe bigger than in some of those reports,” he said. “We see a bigger market. I am more bullish towards the higher side of that range.”

Alder cautioned against mistaking the MAX 10 as a bridge solution for a clean sheet 797. “Let’s be clear, these are two different markets we’re talking about. By going forward with the MAX 10, we’ve protected our position at the top end of the single-aisle market and can now grow that share. The [MoM] airplane would serve a space between the MAX 10 and 787-8. There may be some slight overlap into those areas, but you’re really opening up a market that hasn’t been served before.”

Au revoir Leahy
The 2017 edition of Le Bourget will also be known for the announced retirement of John Leahy, Airbus’ chief operating officer of commercial customers, and one of the most colourful and quotable personalities in aviation. The native New Yorker joined Airbus from Piper in 1985. Bloomberg Businessweek has called him Airbus’ “one trillion-dollar man”. The London Financial Times estimates that Leahy’s fingerprints are on approximately 15,000 of the 16,700 airplanes sold by Airbus. He has outlasted 12 Boeing top sales executives.

An air show legend, Leahy appears to have little love for the Paris and Farnborough extravaganzas, and saw the annual exhibitions as a line in the sand to finalize orders. “Air shows are hot and sometimes very wet, they can be cold and windy, they are crowded, you never have enough time for people,” he told Business Insider. “If you didn’t get [the best deal] from me during the air show, what makes you think you are going to get it from me the week after it? So, it becomes a deadline: that is about the only use I see in air shows.”