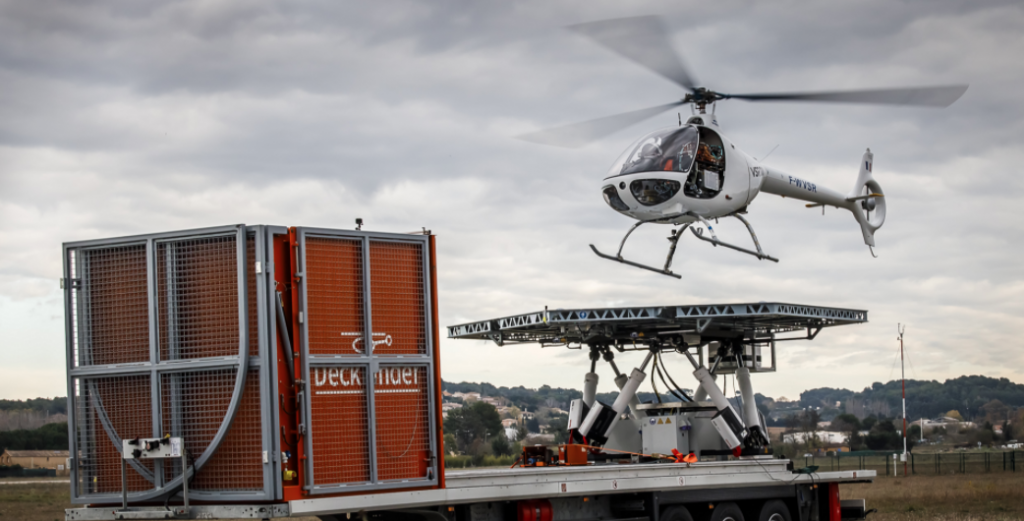 The Airbus VSR700 optionally piloted vehicle (OPV) has achieved fully autonomous takeoff and landing (ATOL) approaches, validating its autonomy to and from a moving platform and advancing the VSR700 program towards its end goal: offering a tactical unmanned aerial system (UAS) with ATOL capacities for global navies. The landing zone: a pitching, yawing platform, mounted on a trailer to simulate the conditions of a moving ship deck.

The VSR700 program began in 2018 when Airbus Helicopters and Naval Group won a contract with the French DGA (Direction Générale de l’Armement) to develop a future tactical drone for the French Navy. Since then, the programme has achieved many milestones in the de-risking phase, including this crucial step of demonstrating the technology needed to perform an ATOL from a battleship.

“A primary challenge for any naval drone is to approach ships in heavy seas as its landing pad moves toward or away from it, on rolling swells that reduce or lengthen the relative distance,” said Nicolas Delmas, head of the VSR700 program in a press release. “Flying in such conditions, the difference of a few centimetres can determine the fate of an entire mission.”

The moving deck trials pave the way for the next major milestone – the forthcoming sea trials with the prototype, known as the SDAM (Système de Drone Aérien pour la Marine). These trials will put the vehicle’s navigation, positioning, flight control and auto-pilot systems to the ultimate test.