News
Where is Roberta Bondar

Canada’s Aviation Hall of Fame (CAHF) in January 2019 introduced its five newest inductees, bringing its members to 233 since formation in 1973. 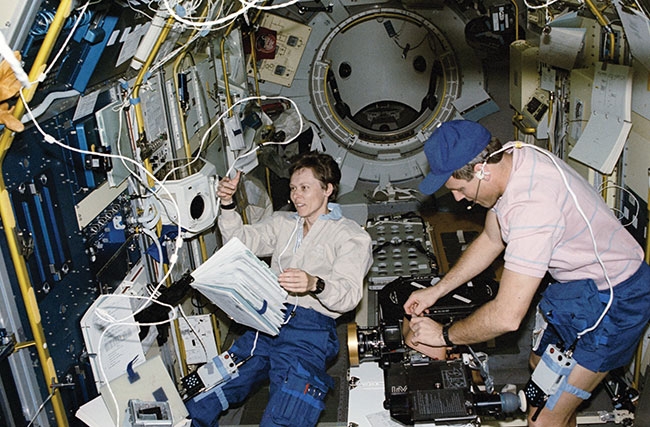 There are  several CAHF inductees from Canada’s astronauts ranks, which currently holds 14 members (active and retired), of which eight have been on 16 space missions between 1984 and 2013. Some of their names stick in my mind like Marc Garneau, the first Canadian to blast off, flying on STS-41-G in 1984. A military man – in fact, he was seconded from the Department of National Defense to the Canadian Astronaut Program – my impression at the time of his flight was that he was involved in a secret military mission.

Dr. Dave Williams flew on STS-90 in 1998. I interviewed him in 2003 about maintenance on the Space Shuttle. (Duct tape is a low-tech, but highly effective remedy for keeping screws and other bits and pieces from floating away.) Julie Payette, well, while having the greatest respect for her incredible accomplishments with CSA and NASA, I recall her youthfulness and great space-hair. Chris Hadfield is surely Canada’s most famous astronaut. He was Top Gun at the U.S. Air Force Test Pilot School, a CF-18 pilot, Commander of the International Space Station, and of course a musician in space. But the astronaut who intrigues me most is Dr. Roberta Bondar, because she is not a member of the CAHF.

Doing research for a past WINGS project to celebrate 100 years of powered flight in Canada, I learned that, as of 2009, just six women were members of the CAHF. Too, and astonishing to me, while I learned that the CAHF inducted Hadfield and Garneau in 2005 and 2008, respectively, (the CAHF inducted Payette in 2010 and Williams in 2012), Dr. Bondar was not a member.

A thumbnail sketch of Dr. Bondar’s place in space could be as follows: She was a member of Canada’s first team of astronauts. She was the first neurologist in space and Canada’s second astronaut to fly, on STS-41 in 1992, an eight-day, 3.36-million-mile mission. She was NASA’s head of space medicine for more than a decade. Globally, she was the eighteenth woman astronaut in space (Payette was No. 36). Post-CSA and -NASA, the physician and scientist, remains active as a photographer and author, environment interpreter and, presumably, founder of the Roberta Bondar Foundation with its goal to “educate and improve knowledge of the environment.”

So, what gives? While the deliberations of the CAHF’s nomination review committee are secret, Aja Cooper, collections manager, CAHF, shared some details of the process: “A nomination, once submitted to CAHF, is in the system for 10 years. If the nominated individual has not been recommended for induction within those 10 years, a new application must be submitted. An individual can be nominated up to three times – essentially 30 years within the nomination process – before they are no longer eligible for nomination,” Cooper explains.

After the first five of those 10-year blocks, if a nominee has not been recommended for induction, the nomination can get a little boost from supplementary evidence. “Supplementary evidence is material produced and submitted to the CAHF office – and by extension the Nominations Review Committee – that is outside of the original package. This could be an additional letter of support, a newspaper article, anything that could enhance the nomination,” Cooper explains.

However, a nomination expires after 10 years, and that person must be re-nominated to be considered again for induction. Dr. Bondar was nominated in 2001, and re-nominated in 2011. “If she is not selected by the 2020 Nominations Review Committee meeting,” Cooper says, “a new nomination package must be submitted. At this point, it will be her final attempt to be inducted into CAHF.”

The likelihood of her induction on a third attempt, should it go that far, is anyone’s guess. Cooper explains, “There have been no nominations that have been brought forward to CAHF that have not been selected for induction before the termination of their final (third) attempt at induction.” Good luck, Dr. Bondar!

Carroll McCormick is a freelance writer from Montreal.
Print this page