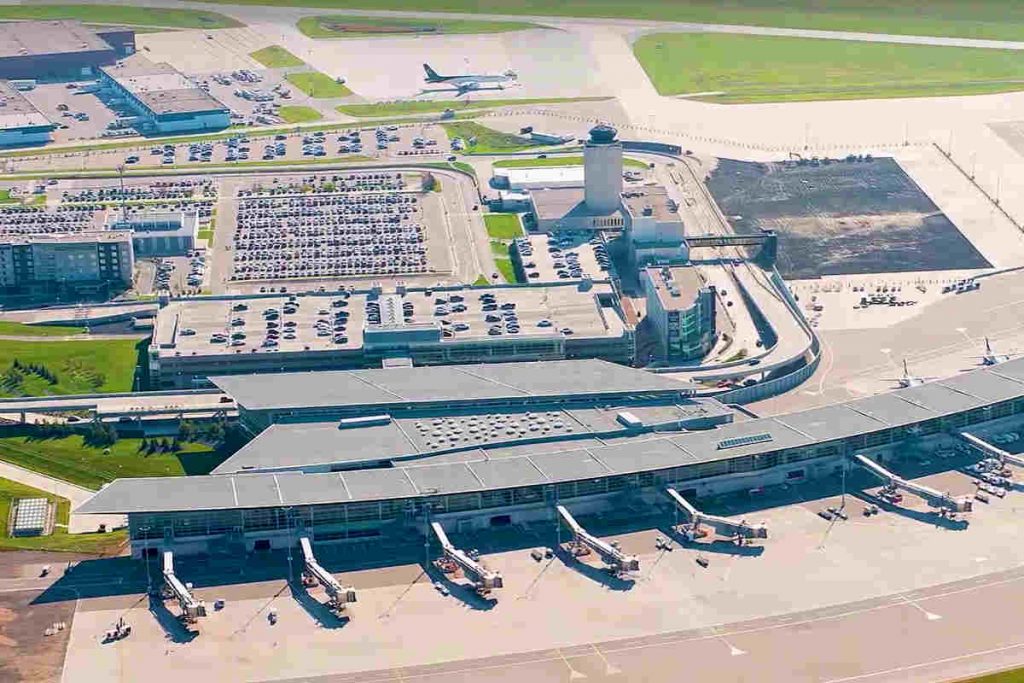 The drop in passenger traffic at Richardson International in 2020 translated into a $73.5-million decrease in revenue. (Image: Winnipeg Airports Authority, YouTube)

The Winnipeg Airports Authority revealed a particularly grim outlook of its consolidated financial statements at its annual public meeting Thursday.

After a year marred by COVID-19, executive members from the airports authority said urgent support is needed from the federal government to save it. They outlined the many ways in which Ottawa has failed regional airports like Winnipeg’s.

Nicole Stefaniuk, vice-president of finance and administration, said 2020 was the worst year in the local airport’s history — mostly because passengers typically make up about 90 per cent of airport revenue and because almost 80 per cent of costs are fixed, such as utilities, personnel employment and taxes).

Passenger traffic fell from an average of 12,300 travellers per day to less than 250 on a good day for Winnipeg’s airport — a symptom of mandated lockdowns, border closures and pandemic travel restrictions across Canada.

“We’ve tried to cut down wherever we could just to make due,” said Stefaniuk.

“We assessed every light, thermostat, piece of equipment and process to find efficiencies and even delayed all non-safety related capital projects to make cuts. There were a lot of unfortunate decisions and we’re still at a hefty loss.”

Part of those cuts involved saying goodbye to almost 20 per cent of the airport‘s 150-person staff, who were either laid off or decided to retire in 2020.

Pay reductions were implemented for non-unionized employees, and the airport even accessed the Canadian Emergency Wage Subsidy to pay out some salaries.

“But what are you supposed to do when no one is travelling and when your federal government just isn’t helping you out like other countries?” Barry Rempel, CEO and president, told the Free Press in an interview.

Canada has provided its aviation and air transportation industry the most minimal support compared to other G7 countries, he said.

That’s going to cause a much costlier recovery for the sector in this country and also result in much higher airfares with fewer route options, said Rempel.

“In reality, we were aviation leaders before this pandemic,” he said.

“This lack of aid continues to hurt our country’s competitive edge in the whole world, especially when you see the U.S. handing out billions of dollars through several legislative packages to their airports.”

Earlier this month, the Trudeau government announced $1.5 billion in targeted support from the federal budget for pandemic-battered travel and tourism industries.

“Canada clamped down on travel to keep Canadians safe, but we will be providing support where COVID has struck hardest,” Finance Minister Chrystia Freeland told reporters, touting the $465 million dollars earmarked under that budget item for air travel and airports.

However, Rempel said none of those details have yet been identified.

The emergency funding is “quite little to begin with, because it’s intended to be for all airports all across the country,” he said. “Certainly, I can say none of us know at this stage where it’s going and if any of that will be coming to Winnipeg.”

Winnipeg’s airport isn’t so keen about support or lobbying from the Manitoba government either. “Have they successfully vocalized our plight on our behalf?” said Rempel.

“You can look at our finances and obviously see the answer.”

On top of that, four airlines — Sunwing, Air Transat, Swoop and United Airlines — have stopped servicing the airport altogether.

Since the federal wage and rent subsidy programs were the only supports provided to the airport in 2020, the company is now exploring alternative methods for relief. They commenced a bondholder consent solicitation process in December and have secured short-term financial relief for the next two years, with a year-end issuing $100 million of bonds.

“I know there is light at the end of this because in all my years in this industry, I’ve seen the desire to go places always returns,” said Rempel.

“But this isn’t just about Winnipeg’s airport. This whole process of building back and recovery will take years and years without the right policies or government support.”