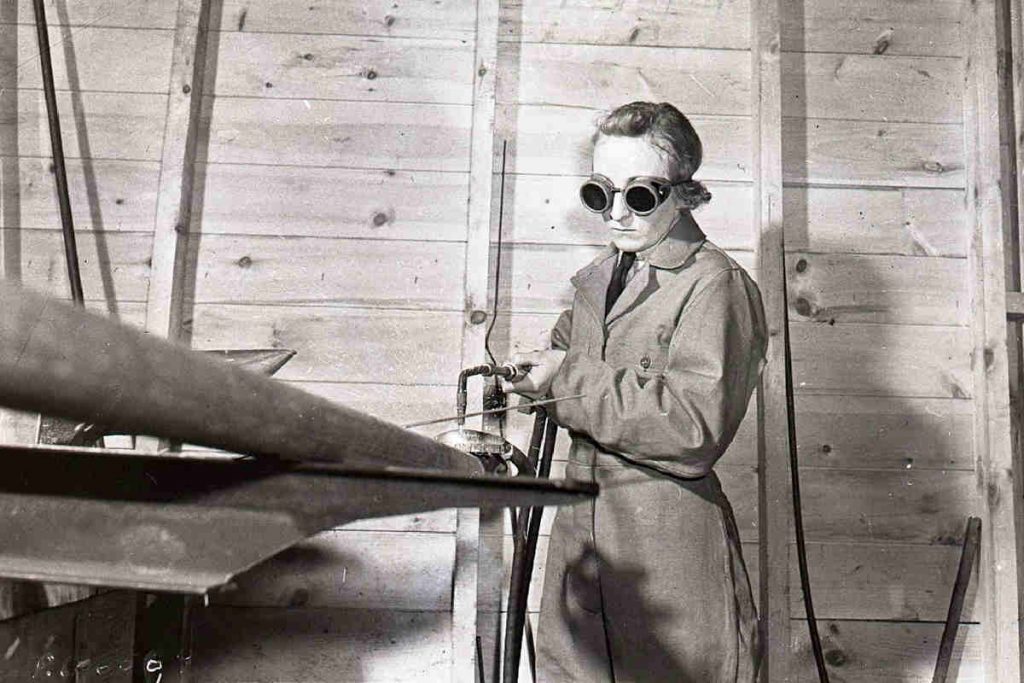 A member of the RCAF Women's Division does welding work on an aircraft. (Photo: Canada Aviation and Space Museum)

Looking back at the history of war, Veterans Affairs Canada documents women of war. Dating well over 100 years, women had very little to no rights at that time, they could not vote, and their sole responsibility was tending to the home and the children. It wasn’t until the 1885 North-West Rebellion that the five women in history were allowed to care for Canadian troops.

A total of 12 women volunteered their services for four weeks as nursing sisters to make bandages, care for the wounded soldiers, and prepare medicinal and food supplies. It was sporadic for any woman to work outside the home. Most had to stay at home and await their loved ones to return from the battlefield. It wasn’t until the Boer War when the Canadian Army Nursing Service was created as Ottawa requested a more formal medical and surgical department to care for all the wounded soldiers.

WWl and WWll may very well have been the most massive bloodbaths recorded in history. The body count stacked up quickly, resulting in fewer men willing to volunteer for battle. Between 1916 and 1917, Ottawa eventually stepped in and forced Canadians through conscription to go to battle to maintain a full force of troops. The need for Nursing Sisters also increased dramatically during WWl, and the Military opened the applications to women for another 75 positions. The Veteran Affairs website documented that 2,000 women applied, of which most were single between the ages of 21 and 38, with the mandate to be a trained nurse before the war began, and paid $4.10 a day.

These women worked on ships, and makeshift hospitals set up near the battlefield. As they were close to the frontline, it became more dangerous, with many women losing their lives due to enemy action. Before the year ended in 1917, 3,141 Canadian nurses volunteered their services. Another significant milestone was women’s right to vote. In 1917, the government extended the right to vote to only those women who served as nurses. In 1918, all women were legally allowed to vote in the Canadian Federal Election one year later.

Canada began recruiting women to serve full time in three military organizations at the start of WWll. The groups were the Canadian Women’s Army Corps, the Royal Canadian Air Force Women’s Division, and the Women’s Royal Canadian Naval Service. Between 1941 and 1942, over 50,000 women served. While they were still not allowed to enlist for combat, they had jobs that were equally needed. During this era, the roles filled were clerical, telephone operators, and more rare tasks such as mechanics, parachute riggers, and heavy mobile equipment drivers. As well, the numbers of nursing sisters jumped to 4,480, working the frontline and abroad.

The roles of women during WWII not only changed on the battlefield but also on the home front. Hundreds of thousands of women stepped forward to fill men’s positions in the workforce. It’s quite amazing to learn of the many women who stepped forward and became loggers, shipbuilders, scientists, munition workers who made guns, bombs, grenades, and ammunition for the soldiers. 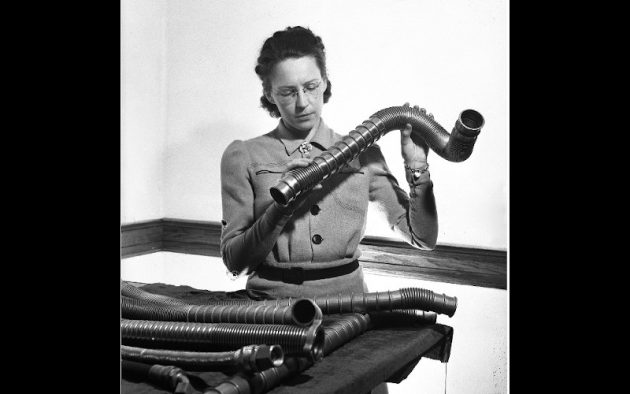 Elsie MacGill, pictured here while serving as chef engineer at the Canadian Car and Foundry Co. Ltd. (1938-1943), became the world’s first female chief aeronautical engineer. She graduated from the University of Toronto’s electrical engineering program in 1927 and was pivotal in the design and production of the Hawker Hurricane in Canada during the Second World War. (Photo: Canada Aviation and Space Museum)

In 1942, Elsie MacGill, regarded as the first female aircraft engineer, led the design of the Hawker Hurricane fighter plane. After the war in 1946, the working women were expected to relinquish their jobs to the men returning from war and become homemakers. Remaining at home didn’t last long as four years later, Canada called upon the women to provide nursing care to the Military service during the Korean War.

It wasn’t until 1970, The Royal Commission on the Status of Women requested the change to the Military to create equal conditions for all, especially women. Over the following nine years, several women pursued their education and graduated from the National Defence College. One obtained her pilot’s wings, and Corporal Gail Toupin became the first female member of the Army’s parachute team. It wasn’t until 1982 that the signing of the Canadian Charter of Rights and Freedoms prohibited discrimination based on sex. It was still an uphill battle for women to be accepted as equals when it comes to military services. The Canadian Human Rights Commission stepped in and, in 1989, ruled that all obstacles to women’s access to military jobs be removed.

Throughout the timeline, it took Canada 106 years for women to reach the plateau of equality when it comes to combat. The Gulf War in 1991, is the first time in which a Canadian woman was able to take part in combat. Year by year after that, women began being promoted to Majors, Colonel’s, Combat Chiefs and Captains. According to Statistics Canada, as of February 2020, the highest percentage for women is in the Navy at 20 percent, followed closely by the Air Force at 19.8 percent. The last category is the Army, averaging out at only 13.5 percent of soldiers being women.

Regardless if it’s man, woman or child, war devastates and affects us all. On November 11, bow your head for two minutes of silence to recognize all those lives that have been lost or forever changed.