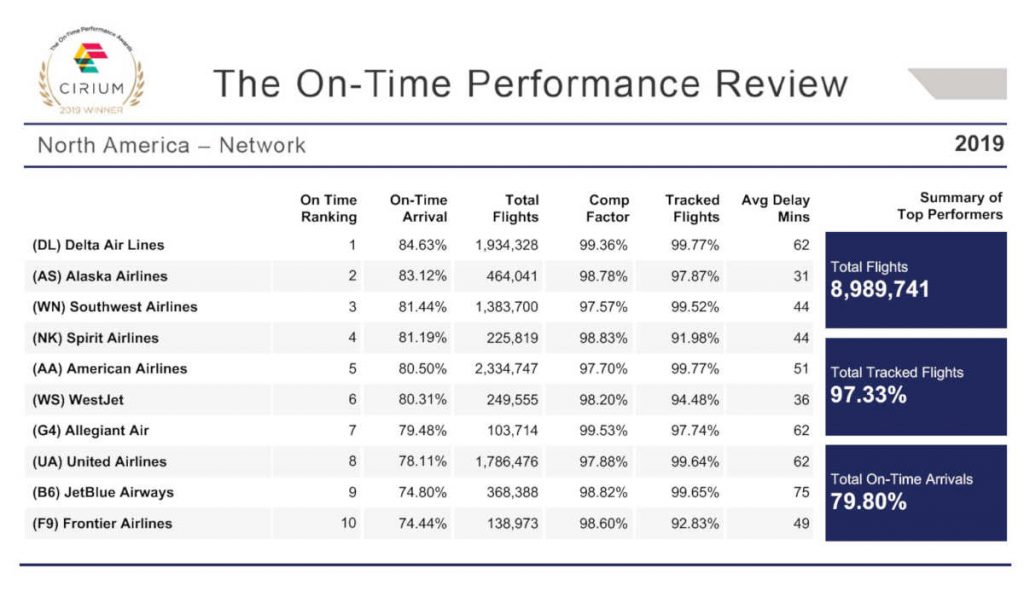 WestJet was Canada’s most-punctual airline in 2019, according to Cirium data, placing sixth in Network operations and eighth in Mainline operations across all of North America. (Chart: Cirium 2019 On-Time Performance Review)

Cirium on January 2 released its annual On-Time Performance Review designed to identify the world’s best-performing airlines and airports for on-time flight operations in 2019, by size and region. This is the 11th consecutive year that Cirium has produced the analysis, which is based on more than 600 data sources and the tracking of more than 100,000 flights per day.

An airline’s flight is on-time if the aircraft arrives at the gate under 15 minutes of the scheduled arrival time, according to Cirium, while Airport on-time performance is measured by on-time departing flights. Cirium states its data-technology processes around 15 million updates per day to help produce the report. In terms of airlines, the awards are grouped into three areas including Global Airlines, Major Airlines by Region, and Low Cost Carriers. Airline performance is then subdivided by Mainline and Network operational categories.

In the 2019 On-Time Performance Review (OTP) results, Russia’s Aeroflot has been named by Cirium as the world’s most on-time mainline airline, as well as in Europe. Aeroflot states its fleet of 247 aircraft is the youngest of any airline worldwide that operates more than 100 airplanes. In 2018, Aeroflot carried 35.8 million passengers (55.7 million passengers as Aeroflot Group including subsidiaries). The 2019 OTP found that 86.7 per cent of Aeroflot’s flights operated on-time in 2019. Japanese airline All Nippon Airways (ANA) came in second place with 86.3 per cent of its flights on time.

Latin American airline LATAM clinched the top ranking of the global network airline category with 86.7 per cent of the flights in its network arriving on time. In Asia Pacific, ANA took top spot; Copa Airlines is most on-time in Latin America; and in the Middle East and Africa, Qatar Airways beat Emirates to top ranking. Japanese airline StarFlyer was named the world’s most punctual low-cost carrier with 91.4 per cent of flights arriving on-schedule.

Cirium’s OTP Review also identifies the world’s most punctual airport, with Moscow’s Sheremetyevo International (SVO) operating the most on-schedule departing flights, with 95 per cent being on time.

“We apply the highest level of data analysis to form our On-Time Performance Review and we’re delighted to announce that Aeroflot surpassed other leading airlines as the world’s most on-time mainline airline,” said Jeremy Bowen, CEO, Cirium. “Looking at the Russian carrier’s past year, it’s clear that as Aeroflot has more controls in place over their environment than most, that helps enormously to drive operational efficiency.”