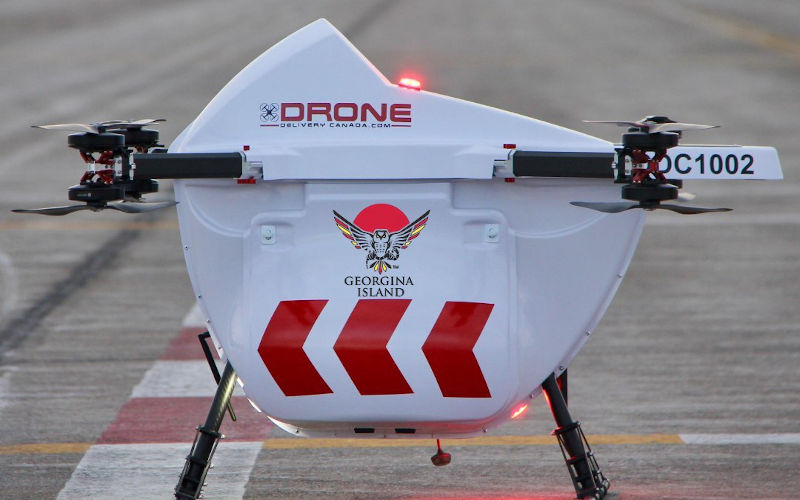 Recent drone delivery projects in two First Nations communities in Ontario have been able to lift the spirits of the local populations.

Bringing in PPE, food, medicine, and other basic and medical supplies, new initiatives in Georgina Island First Nation and Beausoleil First Nation have taken off with the first COVID-19 pandemic-related drone deliveries in Canada.

“I mostly see the interaction with the people on the ground, and they’re just awed and amazed and happy,” said Jacob Taylor, a member of Curve Lake First Nation and founder of the Pontiac Group, a key player in the two projects.

“It generates a good energy and excitement on the ground,” Taylor said.

Drone Delivery Canada (DDC), a publicly traded company based out of Vaughan, Ont., has provided the logistics for the projects, which launched earlier in October, supplying the drones and related materials. A third partner is GlobalMedic, a global humanitarian aid organization. OEC Group financed the project in the majority. And Air Canada works alongside DDC as the company’s sales agent through Air Canada Cargo.

Both projects are using the “Sparrow” drone, designed to navigate distances of up to 30 km with a maximum payload of 4.5 kg. Each project has a designated “DroneSpot” pick-up and drop-off point on the mainland and a separate similar depot on the island communities.

While the drones do run over short distances with relatively small cargo loads in these cases, there is no set schedule on the deliveries as they can run back and forth as needed. The drones are unmanned and are fully automated outside of the loading and delivery processes, though they are monitored through DDC’s central control office.

Michael Zahra, CEO of DDC, says the potential for future delivery projects with Indigenous communities in Canada is one of the company’s main target markets in their plans to expand.

While the Georgina and Beausoleil projects have been successful so far, they’re really just the tip of the iceberg for what is a rapidly expanding industry within Canada and worldwide.

Currently, all commercial drones that are flown within Canada must be visible while under operation, although it is likely that these regulations will change as the technology continues to adapt.

Zahra said that a heavily regulated industry by Transport Canada is welcomed by their company, as it helps to ensure safety and efficiency for their deliveries. He described the relationship with the agency as strong and featuring open communication.

When asked if the drones could be interfered with while delivering supplies, Zahra says that tampering with or attempting to intercept registered drones would be a “major federal offense, similar to shooting a plane down at Pearson Airport.”

DDC currently also offers two other types of drones in their fleet, including the “Condor” which can travel for a maximum range of up to 200 kilometres.

Both Taylor and Zahra agree that one of the biggest potential methods of growth includes longer distance routes to more remote communities that may only be accessible by plane.

“I see a lot of remote Canada benefiting from 1/8drone services 3/8 because every province and territory has a similar amount of communities that would be quite remote and isolated. They’re not always getting the best logistical service,” Taylor said.

Zahra says that while larger companies like Google and Amazon have their own drone operations that might generate buzz on social media, there isn’t really a current competitor in the market that’s able to challenge the “breadth and depth” of DDC.

One potential source of pushback against drone delivery can come from employees of more “traditional” cargo services_ ferry operators, truck drivers, or other delivery personnel that might find themselves in competition with drone projects.

However, there is potential through internal training programs offered by DDC (or local partners) for new positions created by the drone deliveries that can help to mitigate employment concerns as these workers may be able to transition into a new role.

Drone deliveries can also help avoid person-to-person contact during the COVID-19 pandemic, important in the new First Nations service as both communities in Georgina Island and Beausoleil do not have hospitals immediately accessible.

Both Zahra and Taylor agree that the exposure to a new technology can be inspirational to Indigenous youth interested in the science, technology, engineering and math fields (STEM), as well as provide opportunity for employment for the loading and unloading of the drones.