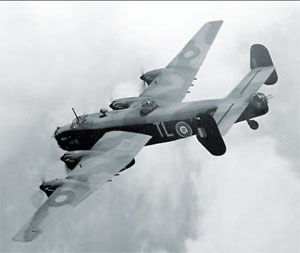 The Handley Page Halifax, one of the three four-engined aircraft that
made up the RAF Bomber Command during World War II, may seem like a
strange choice for this series – if it were not for the fact that the
Halifax was assigned in far greater quantities to RCAF squadrons than
even to the RAF. Of the 37,000 missions that the “Hallies” flew during
the war, no fewer than 29,000 were flown by the RCAF.

In
spite of this accomplishment, the Halifax is much less known in Canada
than the Avro Lancaster that remained in service with the RCAF after
1945. A history of the aircraft shows how long the gestation period of
a four-engined bomber was even back in the 1930s. The design first
started well before the onset of World War II, and a redesign was
necessary before the Halifax was deemed suitable. So promising was this
redesign that 100 aircraft were immediately ordered into production.
The first of these made its maiden flight less than a month after war
broke out with Nazi Germany.

It was, nevertheless, almost two
years before the Halifax carried out its first operational sortie. In
March 1941, a squadron made a relatively short flight to France to bomb
the port city of Le Havre. After that the Halifaxes quickly flew
farther and in greater numbers, using their noteworthy bomb-carrying
ability.

While the Avro Lancaster ended up being the most
utilized four-engined bomber in the RAF, the Halifax became the most
versatile, taking on a number of other roles: parachuting agents into
enemy territory, tug-towing, electronic warfare, met flights and
reconnaissance. It was also put into service with Coastal and Transport
Command.

Early Halifaxes were powered by Rolls-Royce Merlins,
similar to the ones in the Hurricane and Spitfire. In 1943 this was
wisely changed to the aircooled Hercules engine. S/L (Squadron Leader)
John May, DFC, who completed an operational tour with 426 Squadron
RCAF, one of the 14 squadrons that made up the all-Canadian #6 Group,
Bomber Command, recalls how much easier it was to corkscrew with a
Hercules-powered Hally when attacked by a German night fighter, not to
mention better handling conditions on takeoff. The Hercules version of
the Halifax, he emphasized, gave the aircraft a new lease on life.

The
Halifax on display at the museum in Trenton was shot down over Lake
Mjosa in Norway only 15 days before the end of the war. It was finally
retrieved in 1996 and brought to Trenton where thousands of volunteers
rebuilt it. It stands today in pristine condition available for viewing.

The
Halifax may not be among the best known aircraft of World War II, but
for the thousands of RCAF personnel who flew or serviced it, it is an
unforgettable part of their wartime years and its presence at Trenton
is a just tribute to these Canadians.