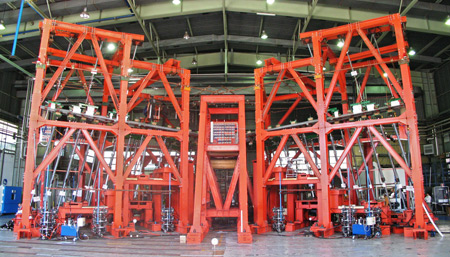 March 19, 2008, Rome, Italy – Alenia Aeronautica, a Finmeccanica company, has successfully completed the "ultimate load testing" of the Boeing 787 Dreamliner horizontal stabilizer. The test has been carried out at the Laboratory of Structural Tests at Alenia's Pomigliano plant in Naples in the presence of Boeing engineers.

The test is a fundamental step as part of Boeing's 787 certification efforts, and is key to clearing the Dreamliner for first flight. During the test, the stabilizer is subjected to the aerodynamic loads that could be experienced by the aircraft during flight in the most severe circumstances.

Using a complex system of hydraulic jacks activated by specifically developed software, the test proves that the 787's horizontal stabilizer is capable of withstanding 150 percent of the load it is expected to see in its lifetime.

"Our entire 787 team is fully committed to safety and reliability as demonstrated by this robust test program," said Mark Jenks, Boeing Commercial Airplanes vice president of Development for the 787 Program. "The successful testing of the horizontal stabilizer proves the capability of the composite material, design and construction."

"Thanks to this test, the last of a series that has shown the compliance with the project's parameters," commented Nazario Cauceglia, Alenia Aeronautica's chief technical officer, "we have once again verified the effectiveness of the innovative structural and technological solution adopted for the 787 stabilizer. This is a testament to our company's capability of managing the whole process of design, development, production and testing of complex composite material components."

Over the past three months, static tests in the laboratory at Pomigliano have successfully bent the 787 stabilizer up and down and asymmetrically at maximum load, simulating three critical design conditions for the stabilizer.

Designed and manufactured by Alenia Aeronautica at its Foggia facility, the horizontal stabilizer is made of two monolithic co-cured side pieces and one central element, is 20 meters long and, like the 787 fuselage and wings, is made of carbon fiber materials. The co-cured box of the 787's horizontal stabilizer is, to date, one of the biggest composite monolithic structures ever built for a commercial airplane; and is manufactured in a one-shot autoclave cure cycle starting from 27 uncured components. This process was developed from Alenia Aeronautica's proprietary technology and represents an innovative production process, making the Foggia facility one of the most important plants in the world for composite material production.

The first production horizontal stabilizer was shipped to Boeing in April 2007.