Popular wisdom says that aircraft provide the perfect environment for spreading disease, but few studies exist to confirm or deny this suspicion. 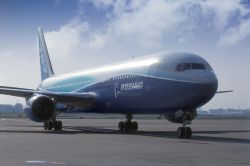 May 1, 2008, Amherst, MA– Popular wisdom says that aircraft provide the perfect environment for
spreading disease, but few studies exist to confirm or deny this
suspicion. Now, a team of researchers from the University of
Massachusetts Amherst, a leading federal agency and Harvard University
has measured concentrations of bacteria in the cabin air of 12
commercial passenger aircraft, and found that flying may be safer than
we think.

“In general, bacterial concentrations and types found during the study
should not pose a risk to travelers,” says Christine Rogers, a
professor of public health at UMass Amherst. “While we did find
elevated levels of bacteria at several intervals during the flight,
they were common residents of human skin and mucus membranes, dust and
outdoor air, including Pseudomonas, Bacillus and Staphylococcus.”
Rogers adds that passengers infected with diseases such as tuberculosis
are a special case that could pose a risk to fellow travelers.

The team sampled cabin air on 12 randomly selected flights using Boeing
767 aircraft, with flight times lasting from 4.5 to 6.5 hours. Samples
were taken in the front and rear of the coach-class cabin at six times
during the flight, including boarding, mid-climb, early cruise,
mid-cruise, late cruise and deplaning. Additional air samples were
taken from the outside and inside of airline terminals at the cities of
departure and landing. Flights were sampled during the summer to
eliminate the effect of seasonality.

An analysis of the data showed some interesting trends that could be
used to predict how disease organisms would move through an aircraft in
the event of an emergency. The highest concentrations of bacteria were
measured during boarding and deplaning. “Human activity during boarding
and deplaning is greatest, which stirs up a lot of dust and causes
increased shedding of bacteria from skin,” says Rogers. “This activity
may also stir up microbes hidden in the seats of the plane.”

Bacteria levels dropped during the middle of the flight when compared
to boarding and deplaning. The drop in mid-flight bacteria may be the
result of less human activity, and the settling of bacteria from
outdoor air brought into the plane before takeoff.

Since samples were taken from different locations in the plane at
several time intervals, the researchers were able to study the pattern
of air movement during the flight, and notice how human activity and
bacterial shedding changed over time.

Levels of bacteria detected in the aircraft were compared to a study by
the U.S. Environmental Protection Agency documenting bacteria in the
air of indoor offices and other nonmanufacturing workplaces.
Concentrations of total bacteria were higher in the aircraft during
boarding, cruise and deplaning, probably due to the number of occupants
in a given space and higher levels of human activity.

“Workers and passengers in commercial airliners are exposed to higher
levels of common bacteria than people in office buildings,” says
Rogers. “This points to the need for additional research to evaluate
disease transmission on commercial aircraft.”