Dozens of people from Canada’s aerospace sector gathered yesterday at Downsview Park in Toronto to celebrate a multi-million-dollar investment from Bombardier to help establish what will become one of North America’s leading aerospace hubs. The event took place in a heritage aviation building that has been transformed into an aircraft cabin interior research facility of Ryerson University’s Aerospace Engineering program. 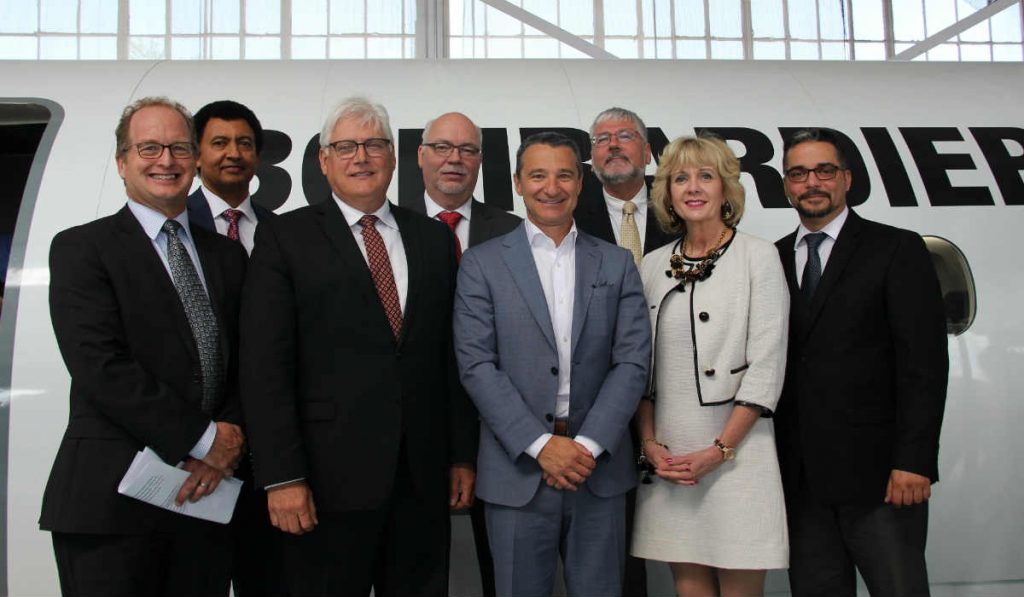 Celebrating Bombardier's commitment to the Downsview Aerospace Innovation and Research Consortium and what will become one of North America's leading hubs for aviation and aerospace.

Across the street, construction continues on Centennial College’s new Downsview campus dedicated to aviation and aerospace. Scheduled to open in January 2019 as part of a $72 million investment, the college’s new four-acre campus will include approximately 138,000 square feet of instruction space and a new hangar large enough to accommodate today’s commercial jets.

Celebrating Bombardier’s commitment to the Downsview Aerospace Innovation and Research Consortium and what will become one of North America’s leading hubs for aviation and aerospace.

“We expect to welcome our students here for the start of winter semester this coming January, after we move all of our aircraft and related equipment from our small hangar at Ashtonbee Campus to this historic facility, which served as the headquarters of de Havilland of Canada,” said Ann Buller, President of Centennial College. “Our new space will allow us to expand our aviation technician AME programs and introduce new ones in aerospace manufacturing, which will triple our aviation-related enrolment to more than 1,000 full-time students.”

Chris Damaren, Director of the University of Toronto Institute for Aerospace Studies (UTIAS), then explained to attendees that UTIAS, recognized as one of the world’s leading aerospace research programs, is working on plans to establish facilities at the Downsview aerospace hub within the next few years.

Development of the new Ontario aerospace hub is being led by the Downsview Aerospace Innovation and Research Consortium (DAIR), comprised of several large aerospace companies and postsecondary education institutions from Greater Toronto. Representatives from the aerospace programs of Centennial College, University of Toronto and Ryerson University were on hand to celebrate Bombardier’s investment.

Francois Caza and Mike Nadolski of Bombardier began the event by reinforcing the company’s continuing commitment to the DAIR initiative. “As part of our partnership with DAIR, Bombardier is investing in the continued growth and competitiveness of the province’s aerospace sector through multi-million-dollar contributions, research, training activities and by supporting the establishment of an aerospace hub in Toronto’s Downsview area,” said Caza, VP, product development and chief engineer, aerospace, Bombardier. Caza also noted Bombardier’s long-running commitment to the Toronto area’s aerospace sectors since acquiring de Havilland in 1992.

Starting this year, Bombardier will provide $1.5 million over five years to fund core research at the Aeromaterials Research Centre, to be established at the DAIR Innovation Centre. As a founding member of the DAIR Consortium, Bombardier will also provide $900,000 over the next three years to support formal operations of the Innovation Centre. The centre will bring together industry and academic partners in a collaborative space for aerospace training and education, R&D, and sector advisory services.

Starting in 2019, Bombardier will contribute an aggregate $1 million over five years for the creation of two Aerospace Research Centres at Ryerson University and the University of Toronto. These centres will focus on research in the areas of advanced interiors and acoustics.

“With their five-year commitment to support the Ryerson cabin interiors research team, Bombardier is taking action to follow through on our collective mandate to catalyze research and development in an aerospace hub at Downsview Park, advance the commercialization of next generation commercially available business jets and commuter aircraft, and empower Ryerson’s cabin interior research team to solidify its role in this space,” said Thomas Duever, Dean of Ryerson’s Faculty of Engineering & Architectural Science.

Bombardier will also provide funding to Centennial College for the completion of its Landing Gear Research project, while extending its existing training program to train a minimum of 50 individuals for each of the next three years at Centennial College’s Downsview Campus.

“I am thrilled with the ongoing support and leadership demonstrated by Bombardier and the opportunity this will unlock for aerospace in Ontario,” said Andrew Petrou, executive director, DAIR, and director, Strategic initiatives and external relations, Centennial College. “This commitment will enable the growth of the Downsview Aerospace Hub through support for training and research, DAIR Innovation Centre physical space and operations, and preservation of the site’s aerospace heritage.”

Finally, in recognition of Downsview’s historical importance in the development of the aerospace industry in Ontario, Bombardier explains it will be providing a total of $2.5 million in capital funding to refurbish the heritage Moth Building, which will be the cornerstone of the DAIR Innovation Centre.