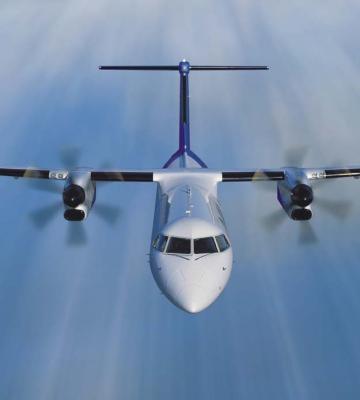 July 17, 2009, Toronto – Bombardier Aerospace today announced that adjustments to line maintenance intervals for the CRJ700/705/900 NextGen and Q400 aircraft have received final approval from Transport Canada (TC), the Federal Aviation Administration (FAA) and the European Aviation Safety Agency (EASA) as part of the approval of the Maintenance Requirements Manuals (MRM) for these aircraft.

Bombardier employed an innovative methodology which combines a statistical approach with actual maintenance check findings to confidently predict maintenance requirements. Under the former process, changes to aircraft maintenance intervals could only be requested following five years of in-service data. Now, maintenance interval adjustments could be set based on as few as two years of successful results.

On May 15, 2009 Bombardier obtained approval for the CRJ700/705/900 NextGen aircraft’s line maintenance check intervals to be adjusted from 400 to 600 flight hours. The information is currrently being distributed to operators in Revision 9 of the MRM. In 2008, approval was obtained to increase line maintenance check (A-Check) intervals for the Q400 aircraft from 400 to 600 flight hours, and technical documentation relating to that increase has been circulated to operators.

Previous schedules required CRJ700/705/900 and Q400 aircraft to undergo line maintenance checks every 2.2 months on average (based on an average daily utilization of six hours per day). Under the new revisions, the intervals are extended to 3.3 months. As a result of this extension, Bombardier anticipates that operators will experience reduced Direct Maintenance Costs (DMC) over the life of the aircraft. “With this achievement, Bombardier has played a pivotal role in the development of new regulatory guidelines for the evolution and optimization of maintenance programs, and it is another example of innovation by Bombardier Commercial Aircraft’s Customer Services and Support team,” said Todd Young, Vice President, Customer Services and Support, Bombardier Commercial Aircraft.

“This certification paves the way for the revision of maintenance schedules on other Bombardier aircraft programs in the future as we work in close partnership with our customers to make continuous improvements in their ownership experience,” added Mr. Young.

To attain the line maintenance interval adjustment on the CRJ700/705/900 NextGen and Q400 aircraft, Bombardier established a reliability reporting system (a database that tracked factors such as dispatch reliability and unscheduled removals) over a two-year period based on input from longtime customers such as Tyrolean Airways (Austrian Airlines Group).

“The escalation of the Q400 aircraft’s A-Check interval is a great achievement,” said Johan Schot, Vice President Maintenance, Tyrolean Airways. “This means a valuable reduction in maintenance workload and related spares consumption.” “The Q400 aircraft has now reached a level of operational maturity that has given Flybe, the confidence to take advantage of the A-Check escalation being offered by Bombardier,“ said Steve Broadbent, Maintenance Operations Manager, Flybe. Flybe operates a fleet of 53 Q400 aircraft, which is the largest in the world.