Bombardier has announced that its facility in Queretaro, Mexico will manufacture the composite structure for its all-new, state-of-the-art Learjet 85 business jet. 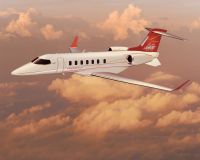 "Mexico is key to the development of a highly competitive aerospace industry in Central and South America, as well as to Bombardier's increased competitiveness in the international marketplace," said Jean Seguin, Vice-President Engineering and Supply Chain, Bombardier Aerospace. "With our facility in Queretaro, we continue to expand our manufacturing capacity while increasing the efficiency of our operations. In keeping with our tradition of innovation, the composite manufacturing capacity we are adding to our plant in Mexico is an excellent complement to the approximately 40 years of experience in advanced composites technologies developed at our Bombardier facilities."

"The name Learjet embodies a legacy of excellence in the history of business aviation and as with all our Learjet aircraft, Wichita will remain the site for final completion of our new Learjet 85 aircraft," said David Coleal, Vice-President and General Manager, Learjet Product Line.
I
n January 2008, Bombardier announced Grob Aerospace had been selected to develop the all-composite structure of the new Learjet 85 aircraft and produce the composite structure during the initial production cycle. During this period Bombardier will transfer composite manufacturing from Grob to its Queretaro site.

Launched on October 30, 2007 the new Learjet 85 aircraft will be the first Bombardier jet to feature an all-composite structure and will be the first all-composite structure business jet designed for type certification under U.S. Federal Aviation Administration FAR Part 25. Entry into service is planned for fiscal year 2012/13.
Bombardier Aerospace in Mexico

Collaborating with the federal and Queretaro state governments to develop a solid aerospace industry in Mexico, Bombardier began operations in May 2006 at its facility in the El Marques Industrial Park. At a ceremony on February 28, 2008, a second plant located at the new Queretaro Aerospace Park was officially inaugurated by Felipe Calderon, President of Mexico; Francisco Garrido Patron, Govenor of the State of Queretaro; and Pierre Beaudoin, President and Chief Operating Officer, Bombardier Aerospace.

Currently, approximately 900 employees work at Bombardier's facilities in Queretaro where they manufacture electrical harnesses and structural aircraft components, including the Challenger 850 mid-fuselage, the Q400 aircraft flight control work package, and the aft fuselage for the Global family of aircraft. By the end of fiscal year 2008/09, Bombardier Aerospace expects the workforce to increase to 1,200 full-time employees.

True to its legendary heritage, the Learjet 85 aircraft is set to deliver the extraordinary
performance, superior technology and exceptional value Learjet aircraft owners expect. The clean-sheet Learjet aircraft targets a high-speed cruise of Mach 0.82 and a transcontinental range of up to 3,000 nautical miles (5,556 km)(i). Designed to provide a larger, more comfortable cabin than any existing midsize aircraft, this jet will offer eight passengers a stand-up cabin built to ensure superior productivity and comfort.

Learjet is the first name in corporate aviation. Since acquiring Learjet Inc. in 1990, Bombardier Aerospace has carried forward the brand's proud legacy by launching eight high-performance and fuel-efficient aircraft.