Bombardier Aerospace in Toronto was a hub of activity today as the new CS100 was showcased in front of a select group of media, municipal, provincial and federal politicians and more dignitaries.

It was also a special day for the hardworking aerospace employees at Bombardier, who had the opportunity to check out the aircraft for the very first time.

“It’s always special when you have the opportunity to share an occasion like this with your team,” said Fred Cromer, president of Bombardier Commercial Aircraft. “It is a proud achievement for sure, we are a strong team-oriented organization. We are currently on track for certification by the end of 2015, and entry into service with SWISS airlines by the first half of 2016.” 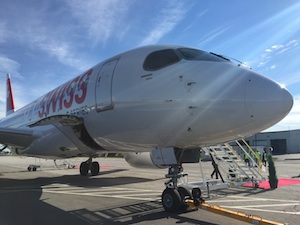 Bombardier took the opportunity to also announce the aircraft has successfully completed all noise performance testing and preliminary data confirms it is the quietest in-production jet in its class. This should bode well for companies such as Porter Airlines, which is hoping to utilize the C Series 100 from Toronto’s Billy Bishop Airport.

Robert Deluce, president and chief executive officer of Porter Airlines was one of the aforementioned dignitaries, and he couldn’t stop gushing about the aircraft. “From a technological standpoint it is so advanced, and it also is environmentally responsible as well,” Deluce told Wings. “It is cutting edge technology that is ideal for this kind of business model.”

Rob Dewar, vice president of the C Series Aircraft program, Bombardier Commercial Aircraft, gave a thorough presentation on program and performance targets, and shared that the aircraft is meeting or exceeding almost all development requirements. Now almost 85, per cent complete, the C Series is on track in all stages of development, he said.

One Bombardier employee who is particularly excited about the program is Mark Elloit, the chief liason pilot, BFTC Flight Test Ops in Montreal. Elliot called the aircraft unique in its handling and flight capacities, and he was enthused about the cockpit layout and functionality.

“It’s such an honour to fly this aircraft,” Elliot said. “It is well-laid out and has performed so better than expected. I really can’t say enough about the design and technology.”