April 8, 2009, Ottawa -  To celebrate this year of centennial events and commemorations the museum has introduced FREE admission for Canadian Veterans effective April 1, 2009. 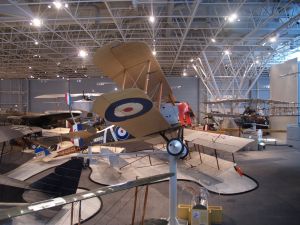 April 8, 2009, Ottawa – After its temporary one week closure to host
the nationally televised Genie awards ceremony, the Canada Aviation
Museum is open once again to the public. To celebrate this year of
centennial events and commemorations the museum has introduced FREE
admission for Canadian Veterans effective April 1, 2009.

The Canada Aviation Museum, as a National Museum celebrates Canada’s
rich aviation history and the men and women who have contributed so
much to making it the rich and diverse country that it is today. The
free admission is a small token of gratitude for the selfless
contribution that Canada’s veterans have made to their country. A
complete admission fee schedule is available on the Museum website.

The Museum will be open to the public on Good Friday, April 10th and
Easter Monday, April 13th, and change over to its Daily, 9am to 5pm
Spring Summer hours of operation on May 1, 2009.

The Canada Aviation Museum is Canada's finest aviation museum with an
internationally renowned aeronautical collection.  The Museum, one of
the three National Museums of the Canada Science and Technology Museum
Corporation, is located at the intersection of Aviation and Rockcliffe
Parkways, just 10 minutes from Parliament Hill.