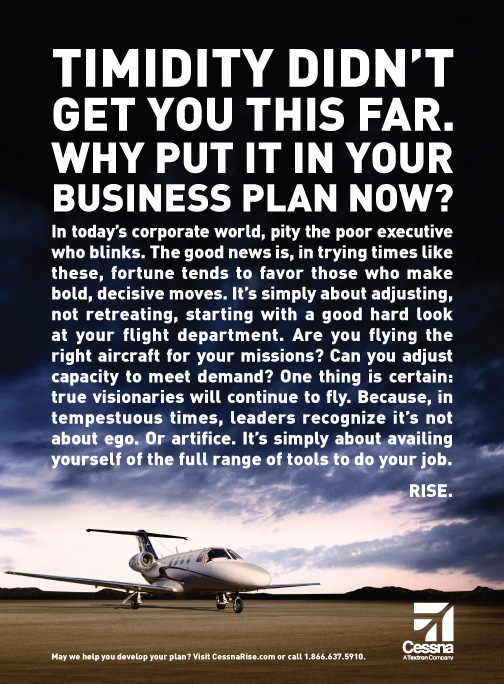 "We think it's time the other side of the story be told, and that support be given to those businesses with the good judgment and courage to use business aviation to not only help their businesses survive the current financial crisis, but more quickly forge a path toward an economic upturn," said Cessna Chairman, President and CEO Jack J. Pelton.

"Today, we are demanding business leaders and managers work at their absolute peak to turn their companies, and our economy, around," Pelton said. "Business aviation provides the means to do just that. A business aircraft is a tool of industry, and one that should see its highest and best use during times of fiscal crisis. Anyone who has ever seen managers board a business aircraft at dawn and return well after dark, having visited multiple cities and attended countless meetings in one day can attest to the fact that business aviation allows companies to get the most out of every minute of every day – exactly what is needed to work our way toward economic recovery."

Pelton said the reality of business aviation is that some 85 percent of aircraft used by businesses are used by small or medium-sized companies, and that the large majority of the passengers are middle managers and technicians. The aircraft, for the most part, are single- and twin-engine propeller and turboprop aircraft or small or medium sized jets.

"The reality of business aviation is a far cry from the misconception of CEOs flying in large luxurious airplanes," Pelton said. "Most of these aircraft are fairly Spartan, designed for business, with a cabin about the size of a minivan or SUV interior."

Cessna's campaign will begin with advertisements with pro-business themes encouraging operators to keep flying business aircraft to demonstrate leadership in the face of economic challenge. The campaign, supported by a communications initiative, will celebrate the business person's vision and pursuit of opportunity served by the increased productivity and efficiency of business aviation.

General aviation contributes more than $150 billion annually to the U.S. economy and is one of the few remaining industries that maintain a positive balance of trade with nearly 40 percent of the country's total 2007 production of $12 billion worth of aircraft exported.

The ad campaign will target national business newspapers and magazines as well as aviation trade publications.