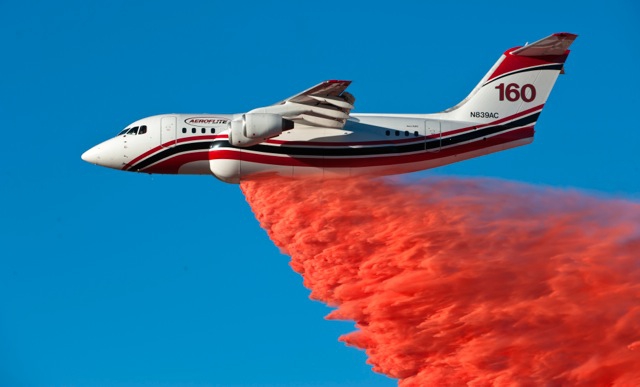 The aircraft is one of three RJ85s owned by Conair Group Inc. of Abbotsford, Canada. Conair has heavily modified the regional passenger jetliner and fitted it with a large external tank enveloping the mid-underbelly fuselage. This tank contains over 11,500 litres of fire retardant or water, released through a sophisticated computer-controlled system.

Conair contracted with BAE Systems to provide specialist technical, engineering and flight test support throughout the conversion programme, as well as ongoing operational and customer support. Conair foresees the RJ85 Airtanker serving in its fleet for the next 20-25 years.

Contracted by the State of Victoria to strengthen its armoury against wildfires during the Australian summer season, the RJ85 (painted as Tanker 162) was used to support ground-based firefighters by flying low over scrubland and forest wildfires and delivering the retardant in seconds to help suppress the flames. If unchecked, these fires can cause loss of life and millions of pounds worth of property damage in nearby communities.

Dubbed as the ‘future generation in aerial firefighting’, Conair chose the RJ85 as the ideal platform for this demanding role because of its excellent high and low speed performance, four-engine reliability even in the demanding conditions of high altitude and hot temperatures, excellent short airfield performance, strong rugged design and the support of BAE Systems, with its decades of experience as the aircraft’s original manufacturer.

Ray Horton of Conair, a veteran airtanker pilot for over 30 years and thousands of sorties, and who was involved in many of the Australian missions said:

“As expected, the RJ85 has adapted to its new role extremely well.  The handling characteristics and performance of the tank/airplane combination have come through as expected and allowed it to become an excellent airtanker.  I have been proud to tell all who would listen how BAE Systems was involved with our programme from the start and helped us to build, retrofit and test fly the RJ which ultimately led to its certification as a premier airtanker.  OEM involvement with such a programme is not a luxury. It’s a necessity.”

Sean McGovern, Managing Director of BAE Systems Regional Aircraft added: “We are delighted to see that Conair’s Australian fire-fighting mission has proved so successful and that the RJ85 has performed so well. We are proud of our contribution to this extensive aircraft modification and look forward to giving continued top-class support to Conair for many years to come.”

Only a week after its Trans-Pacific ferry flight from Canada in December Tanker 162 was in action in Victoria fighting its first fire. Further fire-fighting followed through December and early January.

It was then called to action in neighbouring South Australia, where over a two-day period it dropped some 200,000 litres of retardant on the fire fronts raging in the State. By January 8, the aircraft had completed 14 drops across the two States.

Later it was despatched across Australia to Perth, Western Australia to aid fire-fighting efforts in the south of the State. The RJ85 Airtanker finished out its contract in early March with an airtanker action in the State of Tasmania.
In all cases having the RJ85 based close to the fires themselves was critical to their operations across Australia. The quicker the aircraft can offload its retardant onto the fire and support the fire crews, the more effective the aircraft can be. Turnaround times have been in the order of 20-30 minutes.