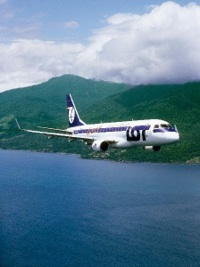 Sept. 15, 2009, São José dos Campos, – Embraer has reached a significant milestone, with the delivery of its 600th E-Jet – an EMBRAER 175 – to LOT Polish Airlines, in a ceremony held in Poland, just five years after the very first E-Jet was delivered, in March 2004. Only a few other commercial aircraft programs have achieved such high production levels in an equivalent period of time in air transportation history.

“The delivery of the 600th E-Jet is a great achievement for Embraer, and we are especially proud that it goes to one of the launch customers of this aircraft family,” said Mauro Kern, Embraer Executive Vice President, Airline Market. “This important milestone takes place just five years after the EMBRAER 170 entered service in Europe with LOT, which is our largest E-Jet operator on that continent.”

LOT’s EMBRAER 175 is configured with a comfortable cabin layout of 82 Elite seats. The new jet will complement the airline’s existing Embraer fleet of ten EMBRAER 170s and six EMBRAER 175s. Together with six ERJ 145s, LOT is able to further expand its European route network, where it competes, in most cases, with conventional narrowbody jets. This delivery is the first of the second contract, announced in January 2008, for an order of an additional 12 EMBRAER 175 jets, plus two options and ten purchase rights.

“It’s a great honor for LOT to take part in this special achievement of our friends from Embraer, receiving the 600th E-Jet,” said Sebastian Mikosz, CEO of LOT Polish Airlines. “We are also celebrating our 80th anniversary, as we proudly receive the new E-Jet. It is the right aircraft to achieve our strategy of network development.”

LOT was the first operator of the E-Jets family in Europe. The airline started revenue service with the EMBRAER 170 out of its Warsaw hub, in March 2004. The fleet of 16 E-Jets has achieved a consistent and respectable schedule reliability of 99.4%, as well as a sustained completion rate of 99.9%, showing the excellence of the E-Jets’ modern design, the aircraft’s high level of maturity, and LOT’s effective maintenance organization.