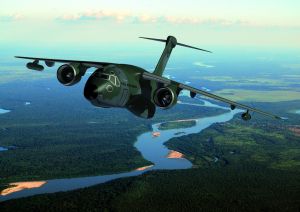 April 14, 2009, São José dos Campos, Brazil – In a ceremony held, today, during the seventh edition of the Latin America Aero and Defence (LAAD) trade fair, which takes place from April 14 to 17, at Riocentro, in the city of Rio de Janeiro, Embraer signed a contract with the Brazilian Air Force (FAB) for the KC-390 military transport aircraft program.

“The launch of the KC-390 program is a new landmark in the historical strategic partnership between the Brazilian Air Force and Embraer,” said Frederico Fleury Curado, Embraer President & CEO. “We are convinced that the development of the KC-390 will result in an effective cargo and tanker aircraft for the FAB and shall also become another successful export platform for both Embraer and Brazil.”

The FAB established the requirements for this aircraft, just as has occurred with other successful products manufactured by Embraer, like the Bandeirante, the Tucano, the aerial surveillance and remote sensoring versions of the ERJ 145, which are used in the Amazon Surveillance System (Sistema de Vigilância da Amazônia – SIVAM), and the Super Tucano. The new jet will meet the needs of the FAB, in full compliance with the new National Defense Strategy. The participation of other countries in this program will be evaluated, in conjunction with the FAB, and the aircraft is expected to enter service in 2015.

The KC-390 Program will contribute, in the short term, to maintaining highly qualified jobs, and, longer-term, it has the potential for generating significant export volumes with important aggregate value. The existence of a study regarding this military transport aircraft was presented two years ago, at LAAD 2007. The jet will have a cargo bay equipped with an aft ramp, to transport a wide variety of types of cargo, including armored vehicles, and will be outfitted with the most modern systems for handling and launching cargos.

The new jet can be refueled in flight and can be used for in-flight or on-ground refueling of other aircraft. The cargo bay will allow configurations for Medical Evacuation (MEDEVAC) missions. The technical advances of the KC-390 include fly-by-wire technology, which lessens pilot work load by optimizing mission results and increasing safety and the capability for operating on short and rustic runways.

The FAB already operates other transport aircraft manufactured by Embraer, like the EMB 120 Brasilia, the ERJ 145, and the Legacy 600. Besides these, the fleet of military aircraft designed and manufactured in Brazil, like the Tucano, the Intelligence, Surveillance and Reconnaissance (ISR) airplanes operated within the SIVAM, and the Super Tucano, as well as the AMX, which was developed in a partnership with Italian companies.

In June 2008, Embraer signed a contract for the sale of two EMBRAER 190 jets to the FAB, which will be configured especially for carrying authorities.