When the executive team at Air Georgian, an Air Canada Express partner, sat down in 2012 for a strategic planning session, it is likely that nobody considered a future that included the remote air strips of the Democratic Republic of Congo, or supporting Canada’s oil and gas sector. It was during a visit to Calgary by Eric Edmondson, Air Georgian’s chief executive officer to research the availability of de Havilland Dash 8 aircraft that the pieces began to fall in place. 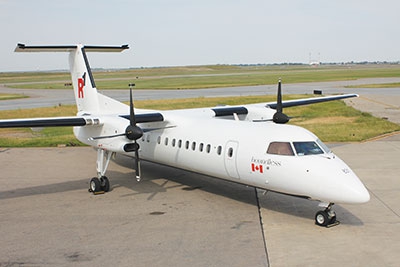 The goal of the Regional Express Aviation Ltd.

Edmondson met up with John Binder, chief executive officer of Avmax, owner of the world’s largest private fleet of Dash 8 and Bombardier CRJ Series 100 and 200 aircraft, and parent of Regional 1 Airlines, a charter operator specializing in the resource sector and delivering humanitarian aid in some of the world’s hot spots.

“We wanted to better position ourselves to take advantage of any future growth opportunities presented to us by Air Canada, including an entry into 705 operations through organic growth, strategic partnerships or mergers and acquisitions.” Edmondson said. “I started to discuss our goals with John. His goals for Regional 1 and their capabilities with Avmax made it clear that a strategic partnership of some sort would be the most logical and mutually beneficial relationship to pursue.”

The result is Regional Express Aviation Ltd., (REAL), a joint venture between Air Georgian and Regional 1, with a goal to be a major player in the 19- to 76-seat turboprop and jet market at home and abroad. “Our current area of expertise is in the 19- to 50-seat market. We certainly see the 76-seat market in our near future,” Edmondson pointed out. The Avmax fleet includes the 86-seat BAe 146 and 74-seat Bombardier Q400.

Edmondson was appointed chief executive officer of Calgary-based REAL, while retaining the same position at Air Georgian near Toronto Pearson Airport. Avmax has representatives on the Board of Directors and plays to its strengths in areas such as leasing and asset management, and MRO (maintenance repair and overhaul), but is not directly involved in either operation.

REAL places Air Georgian and R1 under a new ownership structure, and includes the rebranding and repositioning of Regional 1 Airlines to R1, with added muscle to bid on contracts in the resource sector, and leverage its expertise in international operations as an ACMI (aircraft, crew, maintenance and insurance) operator in remote regions, as well as continuing to support humanitarian efforts.

“R1 does not reflect the Regional 1 of a few years ago in terms of personnel, fleet and scope,” said Rick Pollock, sales manager for R1. Regional 1 began as a scheduled carrier in 2003, linking Red Deer with several cities in British Columbia, before focusing exclusively on the charter market two years later. “It is a thriving airline in its own right with the ability to add aircraft, people and capabilities. The old Regional 1 that people were accustomed to has changed. It will continue to grow under its new R1 brand over the next few years.”

R1 currently operates a fleet of four Dash 8 and 2 CRJ aircraft. The airline leases where needed, largely but not exclusively from Avmax. An immediate benefit of the joint venture is access to Air Georgian’s fleet of 18-seat Beechcraft B1900D commuter aircraft. It immediately opens the doors to more opportunities with existing customers, said Matt Lomas, general manager for R1. “There were parts of a contract we couldn’t bid on because our aircraft were too large. Access to the B1900 gives us the flexibility to go deeper.”

It is not a one way air lane, Edmondson pointed out. Air Canada recently amended its capacity purchase agreement (CPA) with Air Georgian to operate additional regional and transborder routes using CRJ aircraft. “Access to the world’s largest private fleet of legacy Dash 8 and CRJ 100/200 aircraft was obviously a key factor in the recent award from our partner Air Canada,” he said.

Still, REAL goes further than the opportunity to swap out airplanes.

“In many ways, the joint venture was born because of the many layers of synergies both companies could realize through this relationship,” Edmondson added. For example, both partners not only have access to beneficial pricing for MRO services offered by Avmax, mostly relating to heavy maintenance, but also includes paint and interior modifications, spares, avionics support and engine programs. R1 benefits from Air Georgian’s membership in the International Air Transport Association (IATA), where adherence to IATA requirements give Air Georgian a vast infrastructure resulting in standards built around technology and very mature systems. This is seen as a differentiator in servicing the resource sector. Air Georgian has shifted its charter business to R1, freeing up the carrier to start focusing entirely on its CPA relationship with Air Canada. At the same time, Air Georgian keeps open ancillary revenue streams outside of the CPA, which has always been fundamental to the airline’s success.

“The biggest outlier,” Edmondson noted, “is our corporate aircraft management and maintenance business. We are still deciding where it belongs. But it is a very important part of our business, so we need to find the right brand to park it in.”

Establishing a new brand to differentiate itself from the old Regional 1 was one of the priority items on the R1 “to do” list. “The old Regional 1 was highly focused on one or two specific markets,” Pollock pointed out. “Given the fleet expansion and the plans on the horizon, we really wanted something that would distinguish the old from the new.”

The challenge was folding the characteristics of R1 – a limitless airline with almost overnight access to airplanes, willing to fly where customers want to go, including unproven destinations – into a single tagline. The solution: the “boundless” concept. ‘boundless’ is a really good fit,” Pollock added. “It gives the brand something that is readily identifiable. We are chasing markets beyond the traditional Canadian landscape.”

In the past that has included responding to national disasters, political unrest and other emergency situations in troubled areas such as Haiti, during the 2010 earthquakes, and Afghanistan, where R1 continues to operate. “We partner with humanitarian organizations to provide air transport in some of these vulnerable and remote locations,” said Lomas. “We have been able to use a proven formula as a safe and efficient airline and apply that formula to some of the most interesting parts of the world.”

Unlike the line pilots on the Air Georgian side, R1 crews confront a variety of missions on a daily basis. “You definitely have to be comfortable with change and last minute requests,” Pollock admitted. “You are going to fly into airports you have never been to before. Our crew really enjoy the trips they get because they don’t know what next month is going to bring. It holds a lot of appeal.”

Humanitarian work accounts for a significant portion of R1’s revenue, and is often the biggest logistical challenge in terms of tapping into fleet and crew, and getting tires on the asphalt quickly. It also keeps the team sharp when competing for the bread and butter of the business.

“We are constantly bidding for different humanitarian and resource sector projects around the globe. These are activities where you really have to respond in a matter of days. A lot of our competition can’t do that. It takes them months to decide on what we can decide on in days. R1 is still a privately held company and we are fortunate that our ownership can respond to placing aircraft very quickly, and to places where a lot of people don’t want to go,” Pollock said. Indeed, the biggest stumbling block is often acquiring insurance for some of the humanitarian missions.

Going forward, all three business partners, Air Georgian, R1 and Avmax, are expected to stick with their core strengths while leveraging pieces of the partnership to expand. “REAL is interested in continuing to play a key role in Air Canada’s regional network and being able to respond to any future growth opportunities presented to us under the Air Georgian brand,” Edmondson said. “R1 really has two key areas of operation: serving the resource sector domestically, and serving the resource, peacekeeping and humanitarian sectors internationally in remote and difficult regions.

“The fastest-growing economies in the world are in Africa. By 2050, Africa’s 54 countries will be home to two billion consumers. We would certainly like to increase our brand representation internationally. R1 is really engaged in that sector and does a very good job operating in some pretty difficult areas.”

Another expansion opportunity will likely be fleet acquisition, where R1 expects to triple its size over the next five years. While expansion into the 76-seat category is possible for both Air Georgian and R1, expect R1 to remain focused in the 19- to 50-seat gauge. “You can take a Dash 8-100/200/300 places where you can’t take a Q400,” Lomas explained. “There are things you can do with a Dash 8 that you can’t do with any other airplane. So we plan to remain in that market regardless of adding larger gauge aircraft.”

It is still early days, but given that Air Georgian and R1 will remain as separate entities with minimal overlap, it is likely that REAL will sidestep the headaches of knitting two differing corporate cultures together. An outright merger between Air Georgian and Avmax was never in the cards given the core businesses of the two players were so different, and neither side was interested in stepping outside its core competencies.

“Think of Avmax as a services and asset partner, Air Georgian as a CPA operator and R1 as a charter and ACMI airline,” Edmondson said. “All three companies have different roles but each will play a very key part in our combined success. We do not see any further integration. We are excited to see what the next opportunities will be for each brand. And we will keep on looking.”