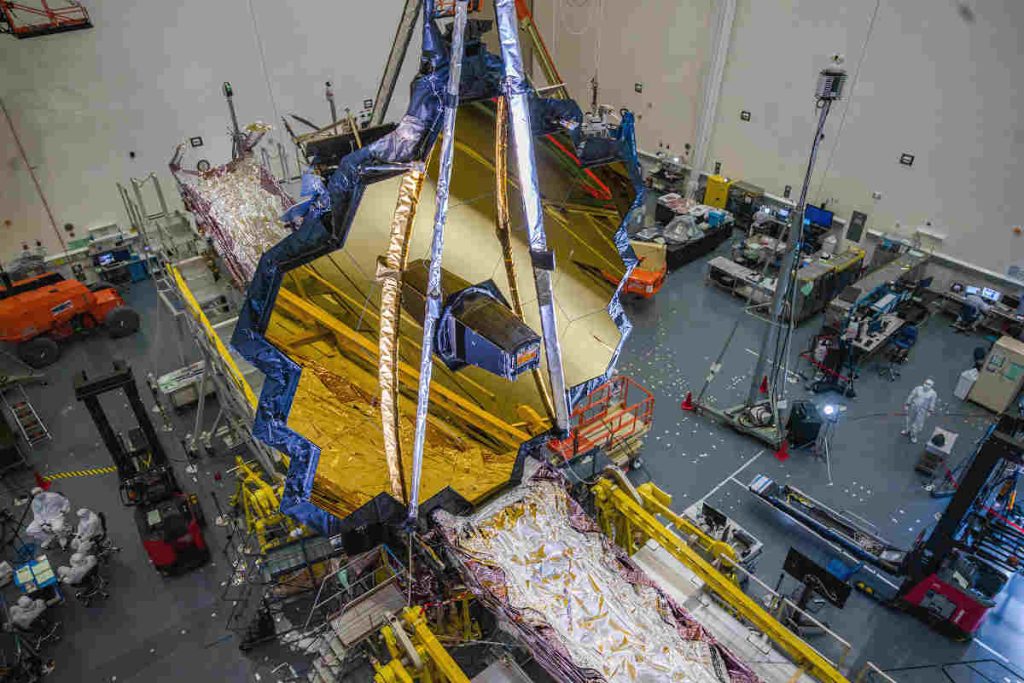 “Comparing Hubble and Webb is like asking if you will love your second child as much as your first,” said Susan Mullally, Webb’s deputy project scientist at the Space Telescope Science Institute in Baltimore.

“Hubble will always be loved for its awe-inspiring images of our universe and will continue to collect important data for astronomers. Webb gives us new and unique eyes of places that we have never been able to reach.”

With NASA and the European Space Agency’s Hubble pushing 32 years in orbit, the bigger, 100 times more powerful Webb is widely viewed as its successor even though the two are vastly different. Its liftoff is slated for Saturday morning from the coast of South America.

The lowdown on Hubble versus Webb:

Hubble caught a lift to orbit tucked inside NASA’s space shuttle Discovery in 1990. It quickly ran into trouble: one of the telescope’s solar wings jammed as it was unfurling. Astronauts suited up for an emergency spacewalk, but commands from Earth freed the panel. Within weeks, Hubble’s blurry vision was detected. Spacewalking astronauts fixed it three years later. Soaring from South America on a European Ariane rocket, Webb won’t be reachable by astronauts at its destination 1 million miles (1.6 million kilometers) away. Bigger and more intricate than Hubble, Webb will be a goner if its foldout mirror and sunshield snarl.

LET THERE BE LIGHT

Webb is expected to behold light from the universe’s first stars and galaxies, beyond Hubble’s range. This light will reveal how the original stars looked 13.7 billion years ago. Hubble has stared as far back as 13.4 billion years, disclosing a clumpy runt of a galaxy that is currently the oldest and farthest object ever observed. Astronomers are eager to close the 300 million year gap with Webb and draw ever closer in time to the Big Bang, the moment the universe formed 13.8 billion years ago. “It’s like looking at the picture book of my kids and missing the first two years, right? Trying to figure out where they come from,” said NASA science chief Thomas Zurbuchen.

Hubble sees what we see — visible light — with a little ultraviolet and infrared thrown in. Webb has infrared vision, allowing it to pierce cosmic clouds of dust. The shorter visible and ultraviolet wavelengths emitted by the first stars and galaxies have been stretched as the universe expands, so Webb will see them in their elongated, heat-emitting infrared form. That’s why Webb’s detectors need to run at minus 400 degrees Fahrenheit (minus 240 degrees Celsius). To stay chilled, Webb carries a parasol the size of a tennis court. Between each of the sunshield’s five layers is a gap so heat can escape out the sides. Multiple layers also better protect against micrometeorite hits.

To discern the universe’s first, faint stars, Webb requires the largest mirror ever launched for astronomy. The mirror spans more than 21 feet (6.5 meters), yet is lighter than Hubble’s, which is 8 feet (2.4 meters) across. That’s because Webb’s mirror is made of beryllium, a strong but lightweight metal. It’s also segmented, allowing it to fold like a drop-leaf table for launch. Each of the 18 hexagonal segments are the size of a coffee table and coated with ultra-thin gold, an ideal reflector of infrared light.

Hubble circles 330 miles (530 kilometers) overhead. The altitude was dictated by the capabilities of NASA’s space shuttles, which delivered Hubble to orbit and then made five service calls. Webb is bound for more a more distant spot — 1 million miles (1.6 million kilometers) away at what’s called the second Lagrange point. This is where the gravitational forces of the Earth and sun balance, requiring minimal fuel for a spacecraft to stay put. Webb will constantly face the nightside of Earth as the spacecraft and planet swoop around the sun in unison.

Hubble was years late and millions over budget by the time it rocketed into orbit in 1990. Webb also is years late with huge cost overruns. NASA’s tab for Hubble from its 1970s development until now: $16 billion, adjusted for inflation. That doesn’t include all the shuttle flights for launch and repairs. Webb’s price tag is an estimated $10 billion; that includes the first five years of operation. The European Space Agency is picking up the launch costs, with a French-built Ariane rocket providing Webb’s lift from French Guiana.

Astronomer Edwin Hubble confirmed a century ago that countless galaxies exist beyond our Milky Way and the universe is constantly expanding. James Webb led NASA from 1961 to 1968, presiding over Projects Mercury and Gemini, and the early phase of Apollo’s moon-landing program. In 2002, a decade after Webb’s death, NASA chose his name for the new telescope. But now some scientists and others want a new name, given Webb’s State Department and NASA leadership during the Truman administration, when government workers were fired for being gay. NASA’s historian conducted an archival search of Webb this year, but found no evidence warranting a name change, said Administrator Bill Nelson.