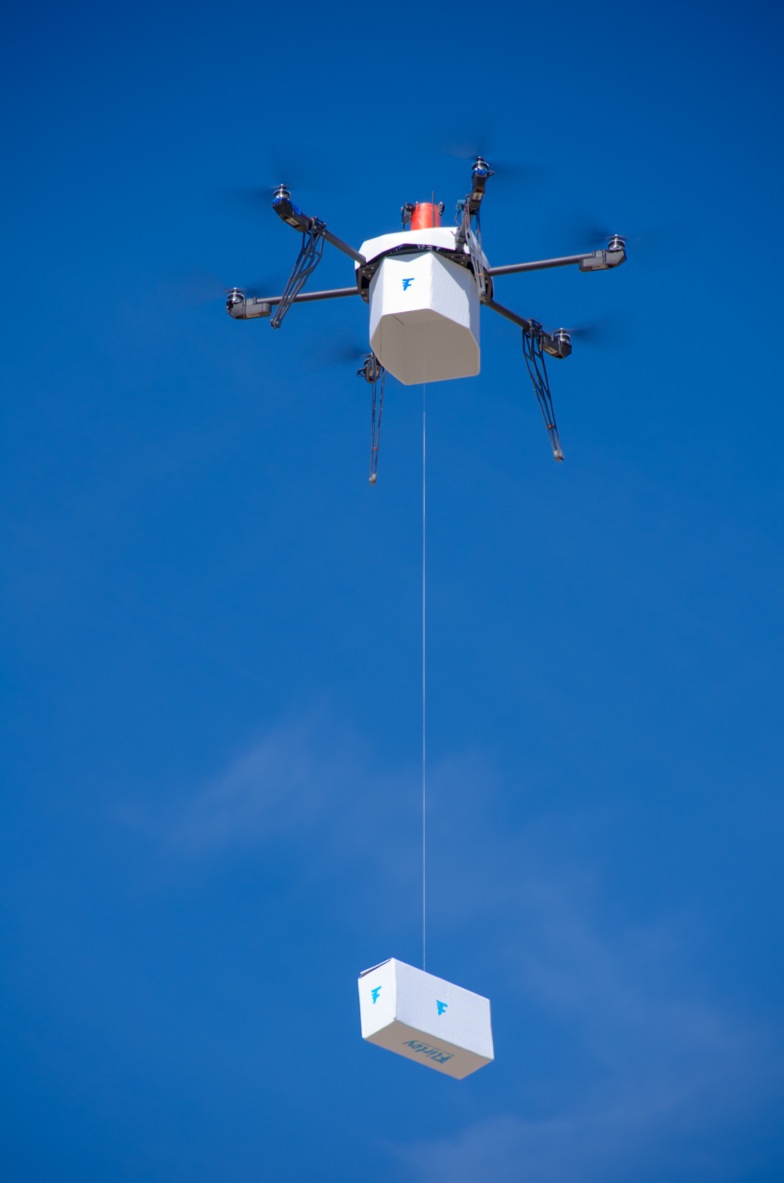 Research and development (R&D) is a major focus of the six FAA-designated Unmanned Aircraft Systems Test Sites, and the Flirtey operation adds significant knowledge to this effort – specifically R&D for search and rescue and crisis response in disaster-prone areas.

The delivery exhibited the industry-leading advancements Flirtey has made in its drone technology and autonomous systems. The six-rotor drone flew itself along a pre-determined delivery route and lowered the package at a precise drop-off location. A Flirtey pilot and several visual observers were on standby during the delivery as a backup to the autonomous system, but were never needed.

The choice of water, food and a first aid kit illustrates Flirtey’s vision to reinvent the delivery process for humanitarian, online retail and food delivery industries.

“Conducting the first drone delivery in an urban setting is a major achievement, taking us closer to the day that drones make regular deliveries to your front doorstep,” said Matt Sweeny, CEO of Flirtey. “Drone delivery by Flirtey is set to save lives and change lifestyles”.

Flirtey’s accomplishment was completed through a partnership with the Nevada Advanced Autonomous Systems Innovation Center at the University of Nevada, Reno. The company has been working with engineers from the university-based center to perfect and evolve its drone delivery technology.  The two partners are also working with NASA to develop a low-altitude air traffic management system.  Additionally, Flirtey partnered with Nevada Institute for Autonomous Systems (NIAS), the FAA-designated Nevada UAS Test Site and a NASA partner for the State of Nevada.

“I congratulate Flirtey on successfully completing the nation’s first fully autonomous urban package delivery, and I am thrilled that Flirtey is not only testing its cutting-edge technology in Nevada, but also creating jobs through its headquarters relocation to Reno,” said Nevada Governor Brian Sandoval.  “When we first set out to target Unmanned Aerial Vehicles through the Governor’s Office of Economic Development, we knew that our state had the expertise to make an FAA Test Site designation a reality, but what we really hoped to achieve was for Nevada to be the center of the commercial UAV industry — the epicenter of research and development, testing, manufacturing, and policy surrounding drones and autonomous systems. The Knowledge Fund has been a successful tool to draw the industry’s attention to our capabilities, and Flirtey’s relocation to Nevada is an important step in this process. I welcome Flirtey to the New Nevada, and look forward to watching them succeed.”

“This was by far one of the most successful UAS operations we ran and represents an advanced level of test and development of new UAS technology, flight planning, innovation, and mission execution by Flirtey,” said Director of Operations for the FAA-designated Nevada UAS Test Site, Chris Walach.  “The Flirtey team excelled in all aspects of safe flight operations in the National Airspace System (NAS).”

Flirtey’s delivery was filmed for a 28-minute ABC-TV documentary called Foreign Correspondent which will air in mid April.