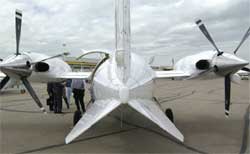 THE PIAGGIO AVANTI draws a crowd like a magnet, parked at Calgary
International Airport. Pilots and passengers approach, curious about
its novel configuration, its performance and its appealing curves. With
a combination of unconventional looks and nearjet performance, the
turboprop Avanti remains a novelty in the business aircraft market. The
airplane is full of pleasant surprises, boasting remarkable performance
for a propellerdriven aircraft. However, the eye-catching Avanti is
anything but unconventional to fly. In fact, I found the only
unconventional aspect of the Avanti was its stunning efficiency.

My
opportunity to fly the Avanti came recently during a flight evalution
with Piaggio America test pilot Bill Hauprich. Our test aircraft,
C-GWRK. is operated by Avia Aviation in Calgary. Avia is currently the
only Western Canadian operator of the Avanti, and holder of sole
Canadian rights to the sale of fractional shares. Joe Viveiros,
president of Avia, recalls that he considered other turboprops or light
jets, but settled on the Avanti because he “wanted the efficiency of a
turboprop with the luxury and speed of a jet.” We greeted the Avanti on
the Calgary airport ramp before dawn in preparation for our flight
evaluation.

The Avanti is an arresting sight. Fit and finish of
the aircraft was very good. The glassy smooth compound curves of the
fuselage often fool observers into thinking the Avanti is a composite
aircraft. Although approximately 20% of the structure is composite, the
Avanti is largely a conventional stressed-skin aluminum structure,
albeit a gorgeous one.

Piaggio builds the Avanti with a novel
‘inside out’ construction method, vacuumforming the skins into a frame
and then attaching the internal bulkheads and stringers. The result is
an aluminum airplane that does indeed look like it was poured into a
mould.