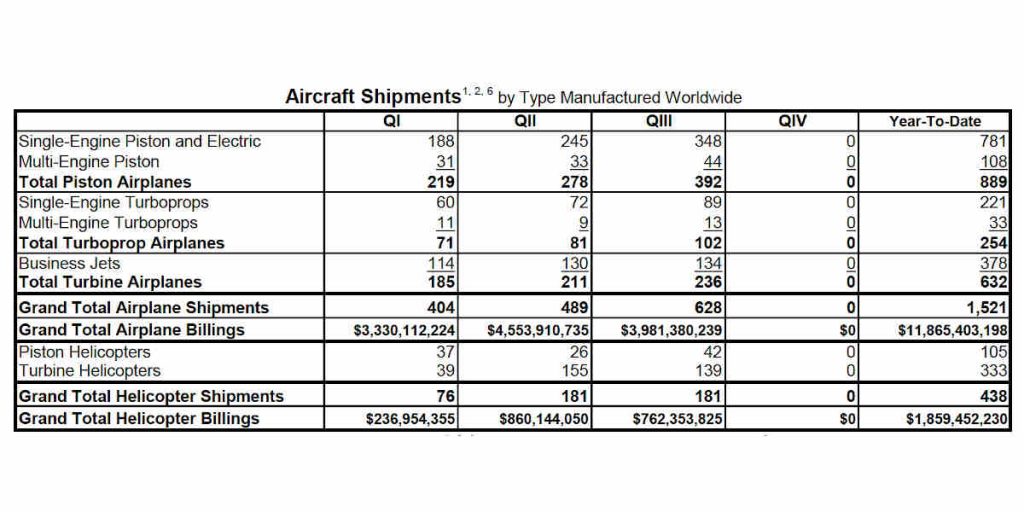 The General Aviation Manufacturers Association (GAMA) on November 18 released its report of general aviation aircraft shipments and billings through the third quarter of 2020. Piston airplane deliveries increased slightly, while turboprop, business jet and helicopter deliveries declined through the first nine months of 2020 as compared to the same period of 2019.

“While we are still trailing in comparison to last year’s figures due to a virus impacted second quarter, it is encouraging to see deliveries in certain segments have rebounded,” said Pete Bunce, President and CEO, GAMA. “This is reflected in what aviators have witnessed over the past few months at GA airports on both sides of the Atlantic where flight activity is robust, particularly in the flight school arena.”

Bunce continues to point out that 2020 Q3 is the first quarterly report in which GAMA has reported certified electric aircraft deliveries, describing the milestone as representing both an “exciting evolution in propulsion technologies” and a pathway toward environmental sustainability.

“While the industry has shown its resilience, it will likely once again face stiff headwinds from the resurgent pandemic, especially given that many European countries have once again gone into lockdown without a common pan-European policy enabling general and business aviation travel across national borders,” said Bunce.