Features
King of the air, PAL Aerospace and EHS LifeFlight 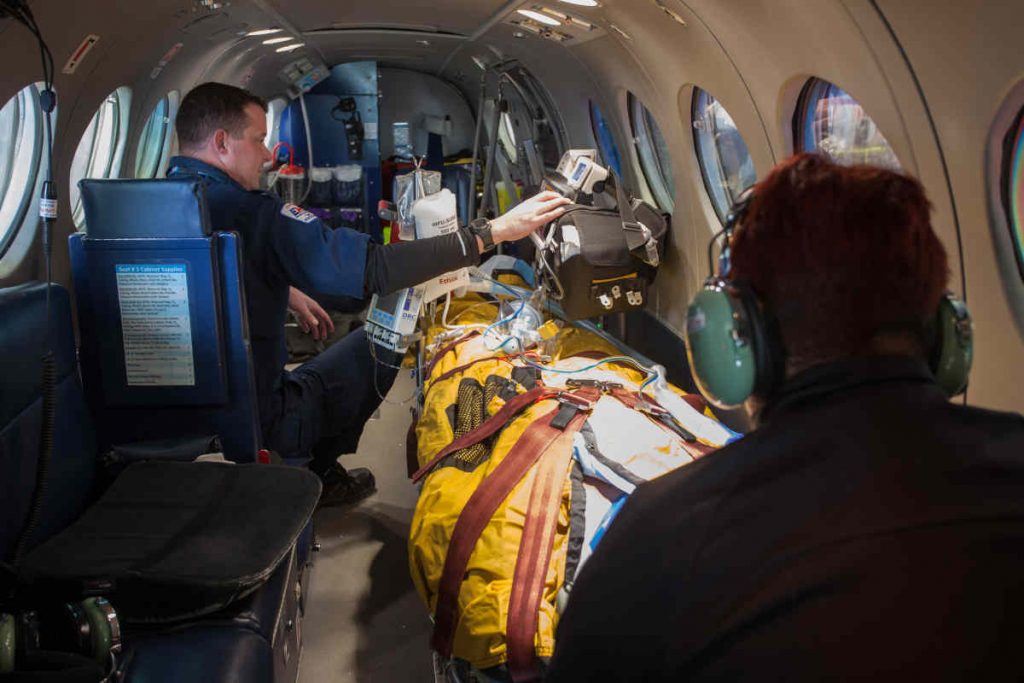 When there is a need for speed, medical air services operator EHS LifeFlight has three aircraft ready to deploy from the Halifax Stanfield International Airport: Two Sikorsky-76C+ helicopters and one Super King Air 200, which LifeFlight describes as a one-of-a-kind aircraft in the world.

The Super King Air 200 is an all-weather plane, with two PT6A-41 Pratt & Whitney turboprop engines, each developing 850 shaft horsepower, and wing de-icing systems. The aircraft is owned and operated by PAL Aerospace, which first made it available to EHS in 1997. In 2009, it switched to a dedicated contract.

EHS is an emergency medical transport provider for Nova Scotia and provides services to Prince Edward Island and back-up/speciality services to New Brunswick. It operates under the management of Emergency Medical Care Inc., a private company that in turn operates under contract to the Nova Scotia’s Department of Health and Wellness, Emergency Health Services division.

The Super King Air 200 has the range needed for the trips EHS makes and has good payload and short-runway capabilities. But to bring the plane more into line with its mission to transport critically ill patients, attended to by teams of top critical care specialists, PAL extensively modified the plane in 2013 and 2014.

First, a working group from EHS and PAL designed a patient-centric cabin outfitted with equipment that turned the plane into a flying emergency room or critical care suite. The plane then went under the knife, so to speak. Colin Flynn, Program Manager, EHS LifeFlight, describes the modification specialists: “They completely stripped the interior of the aircraft. They took away the floor aisles, leveled it and piped in oxygen. There is an oxygen containment system at the back of the aircraft. It contains six hours-worth of oxygen from dual, redundant oxygen cylinders. There are 12 electrical outlets powered by two separate and redundant inverters. There are two complete and independent air and suction systems. PAL even developed the first Transport Canada-certified medical sharps receptacle that we know of. All of the interior equipment is operated from a single control panel.”

The plane can accommodating all patient populations; that is, critically ill patients ranging from premature babies to adults. “We can load two ambulance-style stretchers through the King Air door. Once the patient is secured on our stretcher, they do not have to be moved to be placed in any of the Province’s transport vehicles,” Flynn notes. Since the loading areas at most of the small airports are very dark, the refit included modifying a tail light to shine down and light up the loading areas. “The LED light is a huge advance.” Flynn describes the mission-improved Super King Air 200 as “… a smooth ride – quite a culture shift.” 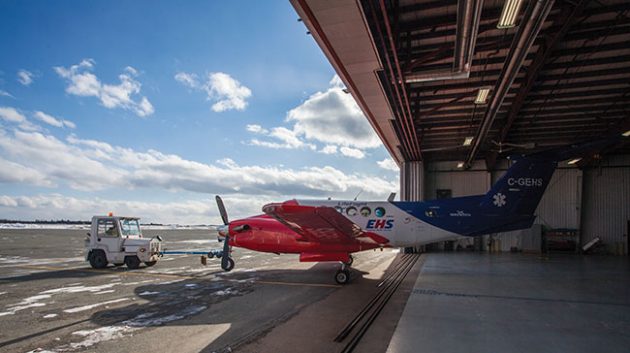 PAL provides the pilots who fly the plane. Minimum qualifications are 3,500 hours, plus 1,000 hours of turbine engine time, for captains and a minimum of 800 hours for first officers. The three aircraft, the pilots, engineers (Canadian Helicopters Ltd. owns and operates the Sikorskys) and medical teams are stationed at the EHS hangar at the Stanfield airport, as is a Freightliner critical care ground unit, adult clinical teams and program administration. The medical teams, the composition of which changes according to each mission and the patients being moved, are made up of critical care paramedics, critical care nurses and registered respiratory therapists.

“We have adult, pediatric/neonatal and obstetrics team configurations,” Flynn explains. “If the patient is over 16, we send the adult team. Less than 16, we send the pediatric team. Less than 28 days old [is] neonatal, which would require incubator transport. A physician representing each speciality group is also available by phone to support our responding teams.

“We transported 160 patients in 2018 for neonatal services,” he adds. “All of the outlying hospitals fly premature babies to the IWK Health Centre in Halifax. The Children’s services team is based at the IWK and consists of nine critical care nurses, nine registered respiratory therapists and eight obstetrical specialty nurses.”

Two helicopter pilots and two medical specialists are each on 12-hour shifts; EHS provides 24/7 coverage. The King Air pilots are on stand-by, off-site. Everyone and everything are kept in a state of readiness that allows wheels up in as little as 10 minutes. “One Sikorsky is always mission ready, while the other undergoes routine maintenance. The expectation is 10 minutes wheels up during visual flight rules conditions and 20 minutes wheels up during IFR conditions,” Flynn says. “The Super King Air 200 is expected to be wheels up in 60 minutes or less in our current contract with PAL.”

Between the three aircraft EHS completes more than 900 missions per year and demand is increasing. “We’ve set a record every one of the past five years. If both helicopters are ready and the crews are fresh, we can put both Sikorskys in the air,” Flynn says, noting all three aircraft are in the air on rare occasions.

The Sikorskys – think first responder – go where the Super King Air 200 cannot. “Normally, a ground ambulance will arrive on-scene first and determine if the patient requires critical care transport, but there are times when EHS LifeFlight will arrive first in cases of remote scenes,” Flynn says.

All of the pilots assigned to support the LifeFlight program must have solid instrument flight rules experience and previous Medivac and maritime flying experience. They are also trained in to how best to assist the medical teams in the event of mass casualty or hazardous materials situations.

The helicopters fly to wherever they are required. They may land on a cordoned-off highway near an accident scene, on a beach, or fly to a hospital landing pad or community landing pad. For the latter, scattered throughout the Nova Scotia, EHS has a network of more than 10,000 Landing Zone Officers it has trained, mostly volunteer firefighters. “They look for level ground free of obstructions. They control the area until the helicopter lands, and the engine shuts down, and they monitor the takeoff, too,” Flynn says.

The program is dispatched out of the provincial Medical Communications Centre located in Dartmouth. The Centre handles all requests for ground and air ambulance transport through calls from individuals or transfer requests from hospitals, through the provincial 911 system.

As EHS LifeFlight says of its service, “EHS LifeFlight brings a specialty team directly to the patient, dramatically increasing the speed at which the patient begins receiving critical care. Additionally, our service supports both hospitals and ground ambulance paramedic teams in managing patients with time-dependent injuries.”