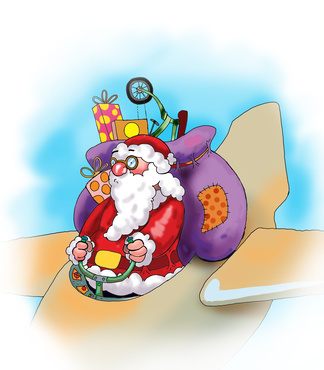 Nav Canada prepared for high priority North Pole cargo flight
Nav Canada reports that all Air Traffic Controllers and Flight Service Specialists scheduled to work on the night of Dec. 24 will give special priority to an extraordinary flight departing from the North Pole.

Nav Canada reports that all Air
Traffic Controllers and Flight Service Specialists scheduled to work on
the night of Dec. 24 will give special priority to an extraordinary
flight departing from the North Pole.

The pilot is making a list and checking it twice,” said a Nav Canada
official referring to the flight’s list of destinations. “He’s an
experienced pilot who knows it’s important to verify your checklist
before departure.”

“The cargo must be very valuable because there is an unusual amount
of security surrounding this flight,” added the Nav Canada official.
The aircraft will have a NORAD escort consisting of two CF-18 Hornet
fighter jets while in Canadian airspace.

The actual content is unknown but the cargo consists of many tonnes of brightly wrapped packages.

Nav Canada Air Traffic Controllers and Flight Service Specialists
working to keep the skies safe across the country will make an extra
effort to ensure that this ultra high-speed aircraft reaches all its
destinations on time.

“We were told that there would be millions of disappointed children
if he was late,” said a Nav Canada spokesman.  “We would never let that
happen!!!!”

Nav Canada officials refuse to reveal the name of the pilot citing
privacy issues but leaked information indicates that he is a very jolly
fellow who often stops to snack on milk and cookies while en route.

The Company would only confirm that a sleigh-like aircraft powered
by nine flying reindeer will be departing the North Pole on Christmas
Eve to deliver packages all around the world.

“If we gave out any more details about this white-bearded gentleman,
it could compromise his identity,” said the spokesman with a wink.