Zhejiang Geely Holding Group has entered into an agreement with Terrafugia Inc, a U.S.-based company focused on the innovation, engineering and production of flying cars and future technologies, to acquire its operations and assets in their entirety. 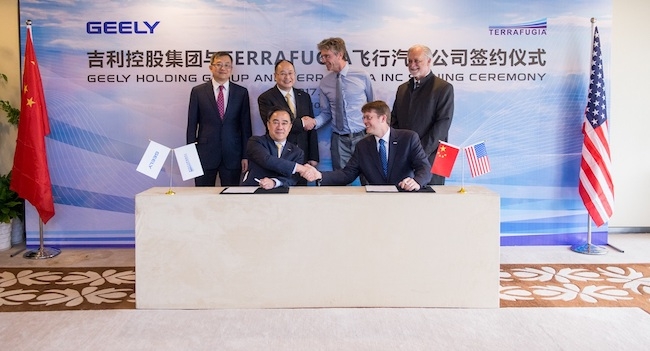 Terrafugia was founded in 2006 by five award-winning graduates of the Massachusetts Institute of Technology. Since its inception, the company has made considerable progress towards realizing its vision of bringing a new form of mobility to the world, and delivered a number of working prototypes. Terrafugia aims to deliver its first flying car to the market in 2019, with the world’s first VTOL (vertical take-off and landing) flying car being made available by 2023.

Under the terms of the agreement, Terrafugia will remain domiciled and headquartered in the U.S., and continue to focus on its existing mission of developing flying cars. Terrafugia will also benefit from the Group’s significant expertise and track record of innovation within the global auto industry.

This deal has received approval from all relevant regulators including the Committee on Foreign Investment in the United States (CIFIUS).

As Terrafugia embarks upon this new phase of its development, Terrafugia has also announced its new board of directors. The new Terrafugia Board of Directors will be compromised of SEVEN individuals.

Chris Jaran – former managing director for Bell Helicopter China – has been announced as a board member and chief executive officer effective immediately. Terrafugia founder Carl Dietrich will serve on the board of directors and transition to the newly created role of chief technology officer (CTO) and continue to work on the market actualization of flying car technology.

Koen Bouwers, a seasoned executive, will continue to serve on the Terrafugia board as he has since 2008.

In anticipation of this transaction, Terrafugia’s team of engineers in the U.S. has already been tripled over the past quarter with Geely Holding’s support with Geely Holding being fully committed to further investing in the business, and creating additional jobs, following the completion of the acquisition.

“The team at Terrafugia have been at the forefront of believing in and realizing the vision for a flying car and creating the ultimate mobility solution,” Zhejiang Geely Holding group founder and chairman Li Shufu said. “This is a tremendously exciting sector and we believe that Terrafugia is ideally positioned to change mobility as we currently understand it and herald the development of a new industry in doing so. Our investment in the company reflects our shared belief in their vision and we are committed to extending our full support to Terrafugia, leveraging the synergies provided by our international operations and track record of innovation, to make the flying car a reality.”