In a ceremony held at Pilatus Business Aircraft Ltd’s facility in Broomfield, Colorado, Western Aircraft, an Authorized Pilatus Sales and Service Center since 1996, took delivery of PC-24 serial number 102. It is the second production delivery of the newly certified Super Versatile Jet. 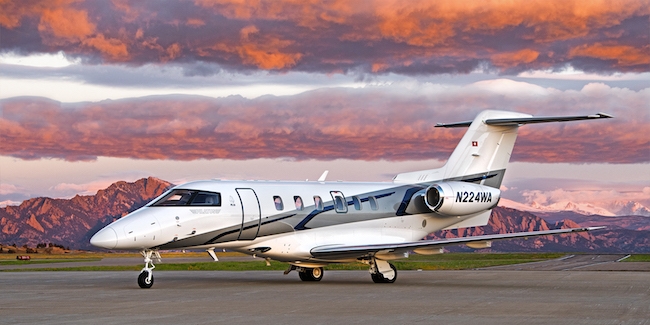 Western’s focus on superior customer service has also been a key part of the Pilatus service network’s achievement of 16 consecutive years of number 1 ranked customer support, as rated by independent industry surveys.

Phil Winters, Vice President of Sales and Charter for Western Aircraft, was on hand to accept their new aircraft, and commented: “We are very proud to be the first Pilatus dealer to take delivery of this fantastic new aircraft. Pilatus exceeded all the ambitious performance targets it promised five years ago when the PC-24 was unveiled to the public. Of course, being a partner with Pilatus for over 20 years, we know how they under-promise and over-deliver, so we did not hesitate to order as many PC-24s as they would let us take.”

Markus Bucher, President and Chief Executive Officer of Pilatus Aircraft Ltd, was present when Winters accepted the PC-24 at the factory in Stans, Switzerland, and stated: “We are honored to have Western Aircraft be the first Pilatus Center to take delivery of the PC-24. We share the common core values of putting the customer first, providing outstanding quality in both aircraft and service, and having a relationship grounded in integrity and trust. Western Aircraft has been an outstanding partner with Pilatus for more than 20 years, and their success is our success.”

Winters continued: “There is nothing else like the PC-24 on the market, and demand for it has been much higher than we anticipated. Even though we’ve received more than a dozen offers to buy this first aircraft, we’ve decided to take it into inventory and use it as a demonstrator over the next year. That gives us the ability to show it to existing order holders, and also to prospective customers who want to get in on the next block of aircraft when Pilatus re-opens the order book.”

Western Aircraft flight crews have already completed their PC-24 type ratings at FlightSafety International, and the maintenance teams have been through training, as well. All special support tooling and spare parts for the PC-24 are already in inventory. Western has enrolled the aircraft in the PC-24’s comprehensive CrystalCare™ engine, airframe, and avionics maintenance program, and will base the aircraft at their headquarters in Boise, Idaho. In addition to demonstration flying, the aircraft will eventually be available for charter on a limited basis.