Ottawa’s unilateral decision to close the door on jets at Billy Bishop, Toronto’s City Centre Airport dealt a setback to Porter Airlines and has put a backyard order for Bombardier C Series jets at risk. With the potential for U.S. customs pre-clearance at the urban airport on the horizon and money in the bank from Porter’s sale of its terminal building last year, the airline approaches its 10th anniversary on a confident growth curve. 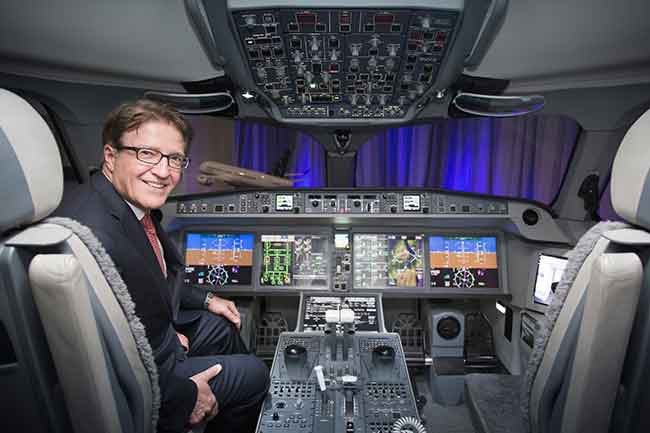 And what should be read into the fact that the C Series order remains on the books? Wings caught up with Porter’s founder and chief executive Robert Deluce, the key note speaker at the magazine’s Toronto edition of Careers in Aviation Expo this spring.

Shutting down jets even temporarily (see, “Trudeau said ‘no’ – but did he really,” pg. 14, Jan/Feb) was a disappointment for the airline, but it does not appear to have dented the management team’s confidence level any.

“There was never a jet plan ‘A’ and a non-jet plan ‘B,’ ” Deluce insists. “The jet plan was getting the required approvals we needed to operate the CS100 from Billy Bishop Airport. Obviously, the decision has put us in a position where we’ve had to step back a little bit and think [about] what we want to do next and where we want to go. But with or without jets, there is room for growth.”

Porter, which remains in private hands, began operations in October 2006 with more than $125 million in start-up capital – one of the largest investments in a new airline in North America at the time – two Bombardier Q400 turboprops and a single route to Ottawa. Today, the airline operates 26 Q400s to 23 scheduled destinations in Eastern Canada and the U.S., and has grown to become the third largest scheduled airline in Canada, augmented by seasonal routes to leisure spots such as Mont Tremblant and Florida.

Deluce notes that the airline is debt free with cash on hand as a result of the sale of its purpose-built passenger terminal to Nieuport Aviation Infrastructure Partners, a Toronto-led international investment group that includes InstarAGF Asset Management and billionaire developer Larry Tanenbaum, part owner of the Toronto Maple Leafs. The sale was for an undisclosed amount thought to be upwards of $750 million, and is expected to help fuel the next phase of growth.

“Building that terminal to a certain standard was a really good move on our part, given that there was no one else willing to step up to the plate,” Deluce says. “We took some considerable risk in doing that, but it was never intended as a core asset. We chose to conclude a sale and leaseback transaction with Nieuport. They are going to get out of it what they want and we have a long-term locked in arrangement that has helped us position ourselves for the future growth of the airline. We will use the balance sheet [from the sale] to help finance the airplanes we need.”

Where these new airplanes go, and whether the fleet will contain jets, Deluce isn’t saying. While there is still room to grow at Billy Bishop the airport is constrained, which means any aggressive expansion strategy on top of the current structure will have to grow operations elsewhere.

Interestingly, Porter’s order for 12 CS100’s – with options for a further 18 of the jets – remains on the books, but Deluce cautions against reading too much into that. “Just the opposite,” he warns. “We have had the deposit since April 2013, and there is really no good reason to remove it. It is a matter of us keeping our options open rather than being pointed in one direction. There is no reason to close that avenue off while we are contemplating our next move.”

Reports surfaced in February that one of the moves includes selling the airline. “There is no truth to that rumour,” Brad Cicero, a Porter spokesperson told the CBC. “We have heard this many times over the last few years, but Porter is not for sale. There have been no discussions with any parties.”

Eventually, the airline would like to bring its acclaimed level of service to Western Canada, but such a move is unlikely before the economy rebounds. Porter would also like to push further into the U.S., but much of that expansion hinges on adding U.S. Customs preclearance at Billy Bishop Airport. The airport already handles more trans-border traffic than Halifax and Winnipeg, and recently overtook Ottawa as Canada’s sixth busiest cross border gateway.

Such a move may result in Porter augmenting its Washington D.C. service at Dulles with the more convenient Ronald Reagan Washington National Airport, which is not staffed by customs officials. “It will allow us to go into some U.S. airports that are strictly domestic airports, for which pre-clearance would be useful,” Deluce adds.

More U.S. destinations also adds up to more American dollars flowing north. As a Canadian airline, Porter has to balance the dual edged sword of lower fuel prices against a plummeting dollar. “We’ve had a good tail wind with the cost of fuel,” Deluce points out. “The bad news is that we pay for our fuel in U.S. dollars, and we pay for other things in U.S. dollars. Having said that, we’d rather be where we are today with the lower fuel prices because there is a net benefit, and an increasing amount of our revenue is coming in in U.S. dollars.”

For now, Porter will expand where it can, perhaps adding new services at core airports outside of Billy Bishop. “There are some short-term regional destinations that we can develop from this airport, and we have always stated that Ottawa, Montreal and Halifax are focus cities that we expect to grow over the long-term. That is still the case,” Deluce says.

Since launching operations almost 10 years ago, Porter has yet to drop a single scheduled route, although some early destinations such as Chicago Midway and Boston were reported to be tough sledding. Deluce attributes this to research and will power. “We research our routes pretty carefully and are very nimble in terms of assessing new potential and putting things in place a little quicker than some larger airlines. Today, I can say we have some very strong routes, even if some were a bit slow in terms of developing – and we have had those sort of routes.”

The economics of the Q400 has helped. Depending on fuel prices and other operating costs in specific markets, Porter pegs its breakeven load factor somewhere between 49 per cent to the higher 50s. On average, each Q400 operates around the breakeven factor. As a private company, the airline does not have to disclose its finances, but Deluce says the company was profitable in 2015, and he expects the same for 2016.

The passenger profile has altered over a decade from approximately 75 per cent business to a more balanced 60/40 business to leisure ratio, although Deluce insists the airline has not strayed from its business roots. “We are still a time sensitive, business-focused airline,” he says. “Many of those who fly with us on business like the product and will take a family member or partner to do something fun on the weekend to one of our leisure destinations, or a destination where they can enjoy a bit of free time such as Montreal and New York.

The airline has also stimulated markets, especially in northern Ontario where Porter Q400s have broken the grip at single service destinations. “Affordable air fares, good frequencies and a choice of airlines can stimulate traffic tremendously, sometimes by 50 to 60 per cent,” Deluce points out. “We have seen that in almost every market we have been [in]. When the other airline had 100 per cent of the market and we come in and can gain 50 per cent market share or better, that’s good. When the overall traffic stimulates by 50 per cent or more, that isn’t bad either. Everybody is a winner.”

Asked whether the Porter model could be exported to an ultra-low cost carrier, Deluce, an industry veteran long before Porter, offers some sound advice: be prepared. “The low-cost model has worked elsewhere in the world with considerable success, and there is no reason to think it can’t work somewhere in Canada. Certainly, anybody who is in the low-cost market place has moved more toward being a legacy rather than a truly low-cost carrier, so there is some appeal to the ultra-low cost model. Whatever the model, there is going to be pretty fierce and sometimes even predatory competition. When you start off as a new airline and you go into a market, you have to be well conditioned.”

Indeed, operating a boutique airline from a downtown urban airport away from Pearson did not shield Porter from bruising competition. “We experienced all the predatory practices that have ever been deployed anywhere in the world,” Deluce reflects. “Putting more capacity in. Discount prices. Litigation. Frequent flyer points. You name it, they came at us with it in spades.”

In the end, close proximity to downtown Toronto, convenience and service, including free onboard snacks, beer and wine triumphed. Porter was chosen North America’s Best Regional Airline in 2014, according to U.K.-based Skytrax, and ninth among the 20 best global airlines according to New York-based Condé Nast Traveler’s 2015 Readers’ Choice Awards, putting the airline in a five-star list occupied by Qatar Airways, Virgin Atlantic, Emirates and Qantas. “Porter is the smallest airline to be recognized and it is a remarked achievement to be listed alongside global brands flying long-haul routes,” Deluce said at the time.

The landscape surrounding Billy Bishop Airport has changed dramatically since the first Porter Q400 took off, en route to Ottawa, its turboprop engines drowned out from the noise of the neighbouring expressway. Condominium units around the airport have grown like weeds. A new pedestrian tunnel linking the airport with the mainland is popular with travellers, and UPX, a dedicated rail link now connects Toronto Pearson International Airport with nearby Union Station, Canada’s busiest rail and commuter transit hub. Early airport detractors argued that once the rail link was up, the business case for Porter would evaporate. Instead, while the UPX has struggles to attract passengers, Deluce says a portion of passengers riding the rails have been good for business.

“We do attract passengers from the two stations between here and Pearson,” he says. “We are getting passengers who are travelling the UPX in our direction, and some passengers who chose to fly in on Porter, overnight to take advantage of some of the amenities downtown, and take the train to connect to a long haul or international flight. We are two different airports. The UPX compliments what we are doing.”

This April, Deluce will be the key note speaker at Wings’ and Helicopters’ Careers in Aviation Expo April 9 inside the Porter hangar, meeting up with some of the eager students who one day might be piloting the aircraft, maintaining it or supporting the airline’s growth. Deluce makes a habit of attending most of the airline’s orientation sessions or interacting with the new flight crews, including a surge in women recruits.

“The ability of a company like Porter to grow and expand is dependent on having really good people,” Deluce says. “We are looking hard to try and attract the best people as possible as we move forward.”