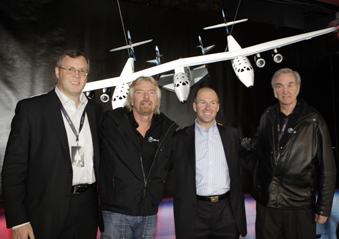 The
PW308 engine was chosen for WK2 by The Spaceship Company – a jointly
owned Virgin Galactic and Scaled Composites company. Virgin Galactic is
the launch customer for the SS2 system, having ordered five SS2
spacecraft with options for a further seven-plus WK2 carrier aircraft.

"We
are delighted to welcome Pratt & Whitney Canada on board the
WhiteKnightTwo program," said Sir Richard Branson, founder of the
Virgin Group of Companies and co-founder of The Spaceship Company.
"With P&WC’s excellent reputation and our mutual desire for
innovation, it became clear that its PW308 engine is the best and most
reliable solution available today to help make our aerospace adventure
a true success."

"We are excited to be part of this visionary
commercial spaceship program that will open up new opportunities for
people to fly into space," said Alain M. Bellemare, President, P&WC
and Executive Vice President, Pratt & Whitney Group Strategy &
Development. "Our global leadership is built on innovation and we look
forward to helping shape the future of suborbital spaceflight with The
Spaceship Company."

Equipped with its PW308 engines, the WK2
launch aircraft, being developed by Scaled Composites, will take off
like an airplane with the manned SS2 attached underneath. It will
launch SS2 into suborbital space from about 50,000 feet. The first
flight of WK2 is planned for 2008.

"The fully certified PW308
meets all thrust and schedule requirements of WhiteKnightTwo," added
Bellemare. "This is yet another demonstration of Pratt & Whitney
Canada’s technology leadership."

Rated at 6,900 pounds of normal
takeoff thrust and equipped with full-authority, digital engine control
(FADEC), the PW308 engine provides a combination of cruise thrust, fuel
consumption and power-to-weight ratio considered best in its class.
Also, as part of P&WC’s sustained efforts and commitment to lead
green technology development, the company will team up with The
Spaceship Company and Virgin Fuels to evaluate the use of advanced
biofuels in WK2 that could reduce engine emissions even further and
make aircraft more environmentally friendly.