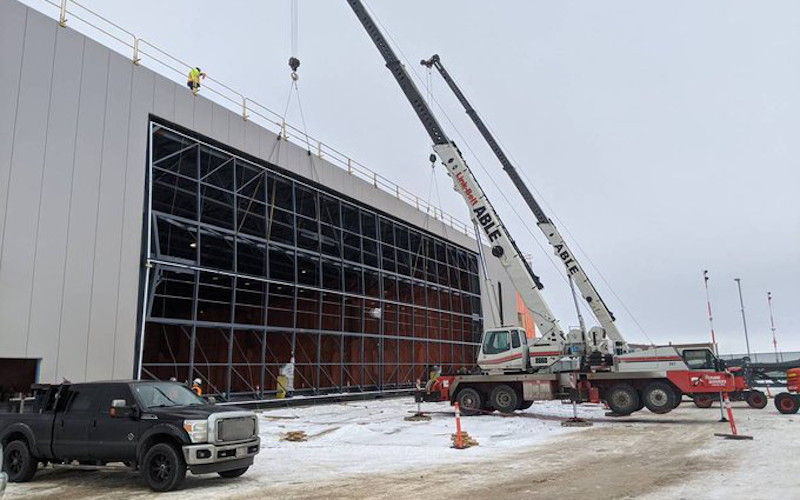 The Royal Aviation Museum of Western Canada on January 26 posted on social media that is has reached a “huge milestone” in its construction journey, sharing pictures of its massive hangar door being installed.

Designed and manufactured by Diamond Doors, the transparent hangar door will serve as a centrepiece of the building, as noted by the Royal Aviation Museum of Western Canada (RAMWC) on Twitter: “With this door installed, the new Museum will allow guests to walk out into Aviation Plaza and enjoy visiting aircraft, exciting events and more!”

Back in late-November 2020, RAMWC issued a statement that the construction of its new building, despite pandemic restrictions, was more than 50 per cent complete and on budget. RAMWC noted its exhibition development was well under way, anticipating a soft opening in December 2021 with a Grand Opening in early 2022.

On April 27, 2020, construction partner PCL commenced with breaking ground on the 86,000-square-foot building at 2088 Wellington Avenue, which is situated on the terminal loop at the Winnipeg James Armstrong International Airport.

The new museum building will house a world-class collection of bush planes and modern aircraft. The museum is working with exhibition firm Reich & Petch Design to develop the galleries. Reich & Petch has worked on projects such as the Barbados Concorde Experience, Philip J. Currie Dinosaur Museum, the ROM Egypt Gallery, as well as multiple galleries at the Smithsonian.

RAMWC is also engaging communities such as women in aviation, Indigenous groups and the aviation industry at large to develop important exhibitions for the region. The museum brought on board guest curator Dr. Niigaan Sinclair to help lead collaborative efforts with Indigenous communities.

“We have a remarkable story to share in our galleries,” says Museum Curator, Davide Montebruno. “The museum story has essentially two chapters; the first half of the museum’s exhibitions centre on pre-1950s Winnipeg, a gateway city, from which bush pilots and entrepreneurs would launch a national aviation industry. In the second half of the museum, in the post-1950s era, visitors will see how our aviation industry, located at the heart of the continent, ushered in a new era with Manitoba as a global leader in aerospace development. We hope visitors will come away educated, entertained and inspired.”

The museum is currently operating out of a 27,000-square-foot warehouse as exhibition development is under way. The warehouse enables the museum to house eight aircraft and hundreds of artifacts under one roof for restoration and research.

Back in November, RAMWC noted its fundraising efforts under the leadership of Co-Chairs Ross Robinson and Blain King, and Honorary Co-Chairs Hartley Richardson and Arthur Mauro, had reached $39.2 million, or 85 per cent of its goal. Project donations at that time included $17.8 million from the private sector, $10 million from the Government of Canada, and $11.4 million from the Province of Manitoba (includes $1.4 endowment).