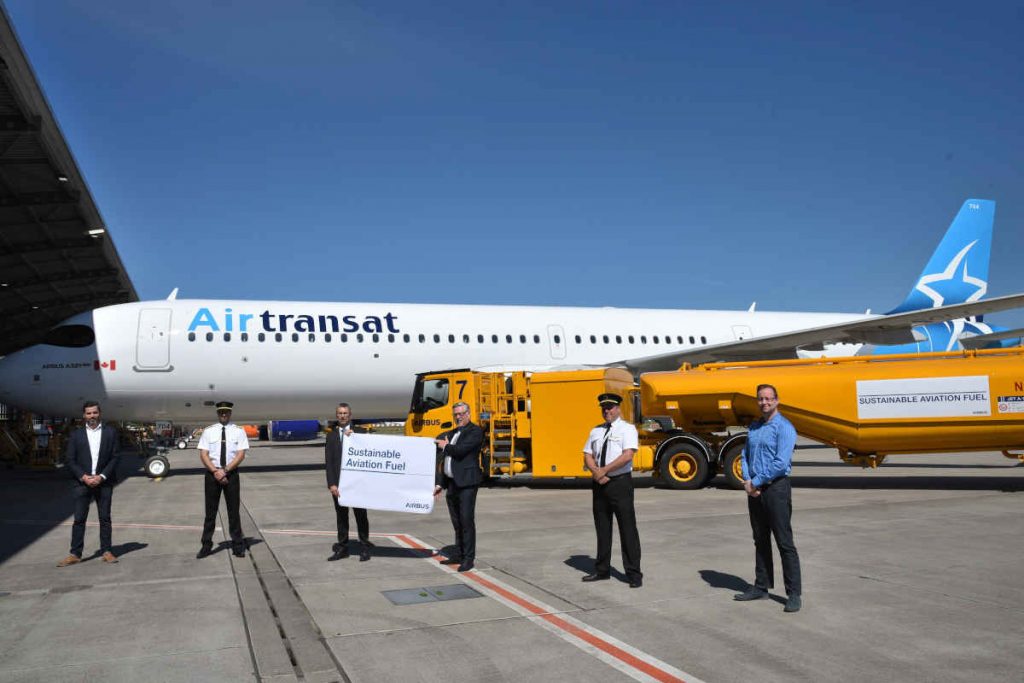 Air Transat on July 17 made the first of two delivery flights with its new Airbus A321neoLRs fuelled by a kerosene blend containing 10 per cent sustainable aviation fuel (SAF), a first for the Canadian carrier. It is also a first for the Airbus plant in Hamburg, Germany, which produces these aircraft, because, until Air Transat, this type of delivery was only offered to Airbus customers at its plants in Toulouse, France, and Mobile, Alabama.

The second Air Transat new A321neoLR flight was scheduled to depart on Saturday, July 18, also heading to Montreal–Trudeau International Airport (YUL). These two aircraft, which are the fifth and sixth A321neoLRs that Air Transat is adding to its fleet, are part of an agreement with AerCap for the long-term lease of 17 A321neos (16 in LR version). Airbus states these new-generation aircraft consume 15 per cent less fuel than the previous generation of Airbus jets.

“It is an honour for us and a sign of confidence from Airbus to be, together with AerCap, its first customer to take advantage of this new delivery option at its Hamburg plant,” said Jean-François Lemay, president and GM, Air Transat. “This initiative is part of our commitment to reducing our own carbon footprint while contributing to the achievement of the airline industry’s ambitious decarbonization targets.”

Produced by the Hydroprocessed Esters and Fatty Acids (HEFA) process by Neste and supplied by AirBP, the sustainable fuel for both flights is certified by the International Sustainability and Carbon Certification (ISCC) system and meets the sustainability requirements of the European Union’s Renewable Energy Directive.

Both delivery flights are carbon-neutral because the kerosene fossil fuel portion was offset by the purchase of carbon credits. “We are proud to be the first Canadian carrier to operate carbon-neutral flights, and we will continue to pursue our commitment to providing our passengers with a travel experience that takes account of our environmental footprint,” said Lemay.

Air Transat recently announced another SAF initiative, after reaching an agreement with the SAF + Consortium of Montreal to purchase a large portion of its SAF production, which will be made from CO2 produced by large industrial emitters. Using a process called Fischer Tropsch (FT), Air Transat explains the CO2 will be captured and converted into synthetic aircraft fuel, which is estimated to have an 80 per cent lower carbon footprint than conventional jet fuel.