The Ibis Ae270 and its Canadian prospects. 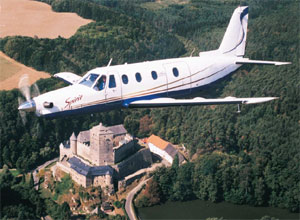 AN ATTRACTIVE alternative to the twin-prop: that’s how Ibis Aerospace
hopes to sell its new Ae270 Propjet cabin-class transport aircraft,
which the company believes will soon be making waves in Canada.

The
airplane was given a bare-bones debut at NBAA in Orlando last year.
Ibis US marketing director Jeff Conrad is aiming for next year’s CBAA
conference for the airplane’s Canadian debut. With its P&WC engine
and extensive use of new hightechnology design and systems, Conrad
believes the nine-seater will easily compete with similar airplanes
such as the Pilatus PC-12 or the Socata TBM-700.

“We believe it
offers an attractive alternative to the Pilatus,” said Conrad, noting
that the larger body hasn’t affected speed or performance; the aircraft
hits a cruising speed of 270 kts. “A lot of it is particularly good for
the Canadian market,” he said, adding that “a lot of the handling
characteristics have come through extreme corners of the flying
envelope.”

Indeed, with an emphasis on handling, Conrad is
confident that the Ae270 will function well even at some of Canada’s
more remote, unimproved airfields and through extreme seasonal
conditions. One unique feature that should help are the eight-inch
mini-winglets that bolster the airplane’s manoeuvrability.

Of
course, it being a turboprop, Ibis also needed an executive model to
show off. Enter the Ae270 Spirit. “We wanted to create a personality or
identity for the executive, and that was the impetus for the name
Spirit,” said Conrad. Along with a more casual seating arrangement
(executive- style club seating instead of all forward-facing seats in
the commercial model), the Spirit boasts side tables, air cellular
system capabilities as well as entertainment system capabilities for
DVDs, not to mention extra storage.

Additional to this will be the FlightLogic Highway-In-
The-Sky (HITS) technology – a virtual 3-D tunnel for instrument flying.
The system also satisfies the Terrain Awareness and Warning (TAWS)
mandate.

Whether for commercial or luxury use, Conrad noted that
the asking price on the plane is very competitive, coming in at US$2.3
million for the standard commuter edition and US$2.55 million for the
executive. Forward crew doors, which can sometimes fetch $80,000 as an
option, are standard, yet large cargo space has been retained as well.