Have you logged any time or turned wrenches on a Rolls- Royce, née Allison 250, turbine? The folks at Essential Turbines and Rolls-Royce Canada certainly have ... 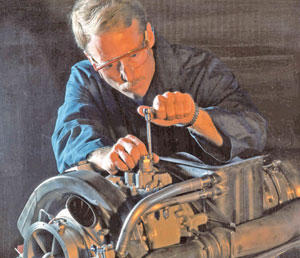 Have you logged any time or turned wrenches on a Rolls- Royce, née
Allison 250, turbine? The folks at Essential Turbines and Rolls-Royce
Canada certainly have, and at a seminar at last year’s HAC gathering in
Quebec City they passed on an array of tips that will save you money
and hassles.

Mike
Guntner of Montreal’s Essential Turbines says the 420-shp RR 250 weighs
158 pounds dry and turns the N1 at an incredible 53,000 rpm at 104%.
Additionally, the maximum stabilized turbine outlet temperature is
1,490 degrees F! While that seems like a lot of operational stress for
an engine, the major strain on the turbine is cyclical temperature
differentials. Each start/stop must be recorded as they limit the life
of the power plant due to metal stresses associated with rapid
increases or decreases of exhaust gas temperatures – i.e., during
startup and shutdown.

Another engine killer is flight in sandy
or dusty areas. Airborne particles erode the plastic compressor case
halves and the resulting air “blow-by” around the edges of the blades
will eventually cause the engine to fail its power check. This results
in premature overhauls and extremely high-cost hourly operation. I’ve
seen this happen in less than 100 hours of Australian desert operations
in a fleet of JetRangers – very expensive! This wear is avoidable by
choosing more suitable landing surfaces, wetting down the pad area or
making no-hover autorotations for landings on suitable surfaces, to
reduce engine and rotor system speeds thereby reducing erosion. (Some
cracks in the plastic lining are normal due to the thermal shock from
normal operations.)

Much of a turbine’s
reliability depends on pilot handling. You can extend the lives of your
engine and yourself by observing pre-flight inspection requirements,
starting limits and in-flight parameters. Use flying skill as opposed
to heavy applications of power to accomplish your goals. While you may
think highly of your skills, you don’t want to have to put them to the
test during a real powerless emergency landing caused by inappropriate
engine handling. Oh, I know your autorotations are first-rate, but
during practice you pick your landing area and don’t flare into tall
trees or rocky mountainsides.

Essential Turbines says that
prudent pilots should operate the antiice system from time to time to
ensure the anti-ice air outlet slots at the front of the compressor
aren’t plugged. If the TOT doesn’t rise when checking the anti-ice,
suspect plugged slots and turn to your maintenance team for help.

A
hot start will result after an abort at any time that the combustor
drain valve gets plugged and someone attempts another start.
Immediately after pressing the starter button a “boom” will be heard as
the pooled fuel ignites and spreads a gusher of flame out the exhaust
duct. On hearing the whoosh, the pilot should keep motoring the engine
while closing the throttle to keep a cooling airflow circulating
through the engine to purge the burning fuel and minimize damage.

Ever
have an engine that smokes after shutdown? This is likely a leaky seal
and not a problem as long as the oil consumption remains within limits
(one quart in five hours). So what’s the deal when you are flying along
and the oil pressure goes to zero? Most folks would instantly enter an
autorotation and perhaps wrap the bird up in a ball at the termination
thereof. Before plunging the pole through the floorboards, Essential
Turbines recommends checking the torque meter pressure. If it is
functioning normally (with its oil pressure supply), then the engine
oil pressure gauge system has failed and you can rest assured that oil
is in fact circulating. However, if the torque meter shows no torque –
that would be a good time to practice your autorotation skills. (This
engine will operate for approximately 30 seconds without oil supply and
then the #8 bearing will fail.)

Guess the primary cause of hot
starts? If you said rapid or early opening of the throttle, starting
with a tail wind or not motoring residual heat out of the engine from a
previous shutdown – you were wrong. It’s a weak battery. Although the
others can contribute to “warmish” starts, care and feeding of your
battery is the best investment in reasonable start temperatures and a
long, reliable engine life.

How about oil blowing out of the
gearbox vent? While this could have been the result of overfilling the
reservoir, it is also possible that excessively high gear box pressure
exists. You can lower this pressure by installing a different size
diffuser vent orifice.

Have you ever had a 250 compressor stall
during start-up on a freezing day? Did you recently wash the engine? If
water freezes in the bleed valve venturi it causes the valve to close
prematurely and the starter motor will be unable to overcome the back
pressure.

Is your transmission oil level increasing on your Bell
helicopter? A transmission making oil isn’t magic. It’s almost
undoubtedly a failed double lip garlock seal on the freewheeling unit
at the power takeoff drive pad. A bad seal allows oil to seep from the
engine/gearbox supply into the transmission.

Don’t forget those
two-minute idling periods to reduce oil coking. Cooling down the
turbine’s interior below the “coking” temperature precludes carbon
formation. Also, trend monitoring is very important and has saved my
bacon on at least one occasion. Regular in-flight power checks and
monitoring engine coast-down times from throttle “chop” while listening
for unusual noises can lead to maintenance checks that eliminate

For
those of you with FADEC installed on your RR turbine, (Bell 407 for
instance), do not disregard a FADEC fault indication. Immediately
determine the warning’s significance.

Although the ECU box is a
handy step, don’t tread thereupon as the contents are delicate – and
expensive to replace when crushed. Also, avoid water spray washes with
pressure exceeding 30 psi near FADEC components and ensure caps are
installed when connectors are removed as any form of contamination can
result in faults – grounding your bird.

Jim
Taylor of Rolls-Royce analyzed 234 engine events (a euphemism for
pricey problems), and advises 48% were maintenance- or overhaulrelated.
The other biggie is the basic engine systems themselves. “Operational”
incidents caused only 10% of the difficulties – making pilots look
pretty good in this data. So let’s look at avoidable maintenance issues.

Operations
in a corrosive or erosive environment require daily engine gas path
rinse/washing. Previously, many methods of rinsing have been employed
to clean compressor sections in the field; however, we are now advised
to use a dispersed water stream rather than a strong jet of water to
avoid damage to the engine. So much for borrowing the fire department’s
high-pressure hose. Taylor also reminds operators to use only approved
cleaners, such as isopropyl alcohol.

The RR rep cautions
operators to respect the 300-hour PC filler inspection as dirt
accumulation results in slow or hung starts and may reduce power output.

Essential
Turbines asks if you ever notice coppery residue in the oil change. The
#1 bearing in the compressor front support is the only copper cage
bearing in the engine. Remember, non-magnetic copper residue will not
be found on the chip plug – so you will need to look in the drained
oil. If you find copper, ground the helicopter until the bearing is
replaced.

While it may not make RR happy, Mike Guntner
recommends Extex compressor wheels as replacement items simply because
they are better. He also emphasizes regular cleaning of the fuel nozzle
to avoid carbon buildup which erodes the N1 rotor gas producer blades
and eventually results in loss of power. And he wants everyone to be
aware of the new AD 2006-13-06 on the tie bolt that requires
replacement by Oct. 31, 2011. Also, the new replacement RR tie bolt in
the gas producer wheels now has a cycle life of 9,000 starts.

If
your helicopter has a gearbox breather line installed and suffers a
smoking habit from the right exhaust, you likely need a larger orifice
diffuser vent because high gearbox pressure is overriding the air/oil
separator system and blowing oil out the air/oil separator breather
gear vent. If changing the orifice doesn’t solve the smoking routine,
the garlock seal of the air/oil separator gear has failed and the
gearbox case must be split to replace same.