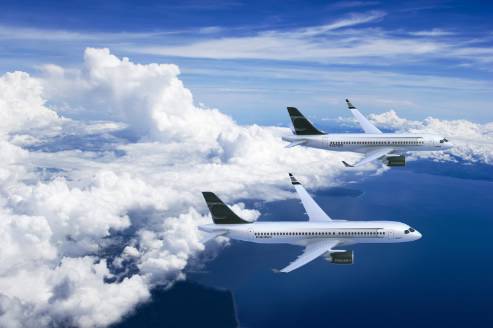 “The offer of repayable investment from Northern Ireland and UK
government departments is subject to EU approval, and we are
confident it is fully compliant with EU and international
requirements,'' said Bombardier spokesman Marc Duchesne said.

A U.S. trade official confirmed Monday that the United States
plans to scrutinize a decision by the Canadian, Quebec and British
governments to financially support the new 110- to 149-seat
aircraft.

Bombardier, which makes the Learjet, plans to use about $350
million from Canada, along with US$298 million from Britain and
further help from Quebec authorities to create a new commercial jet
that would compete with Boeing and Airbus' smaller offerings.

The world's third-largest aircraft manufacturer selected Belfast,
North Ireland and the Montreal areas to design, build and assemble
the new aircraft. The sites were chosen over Kansas City, Mo.

Deliveries of the airplane are expected in 2013.

The American government said it plans to check if the government
assistance is illegal under international trade laws, which attempt
to prevent businesses from receiving an unfair competitive advantage
as a result of government assistance.

“The United States has long expressed concerns about government
financial support for the launch of commercial aircraft and has
pursued this issue with the Europeans in the WTO (World Trade
Organization),'' Gretchen Hamel, a spokeswoman for U.S. trade
representative Susan Schwab, said in an emailed statement.

“Washington will take a very careful look at the support
announced by Canada, Quebec and the U.K. to ensure they do not
distort the market for commercial airliners or contravene WTO
rules,'' Hamel said in the statement.

Britain said it believes its funding, which is subject to
approval by the European Union, is within WTO rules.

Canada, Europe and the United States have had a number of bitter
recent disputes over aerospace aid.

The WTO is currently deliberating over a case the U.S. brought
challenging the billions of euros in launch aid that European Union
states, including Britain, have given Airbus over the last 30 years.
A decision on that case is expected next month.

At the same time, the European Union is counterclaiming in the
WTO's courts that the U.S. subsidizes Boeing through its military
and space program budgets.

Six years ago, the WTO ruled that a $1.7 billion low-interest
loan Bombardier received from the Canadian government did break
international trade rules.