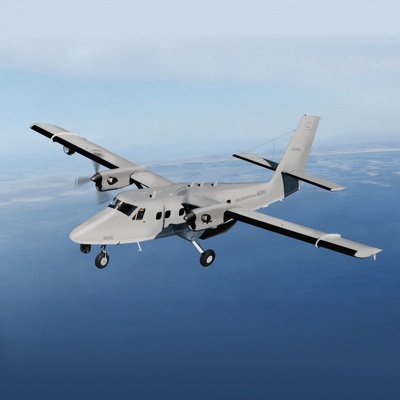 June 18, 2009 – June 18, 2009 – Paris, France – In response to customer demand from foreign military and government agencies, Viking has released preliminary data of its Guardian 400.

June 18, 2009 – Paris, France – In response to customer demand from foreign military and government agencies, Viking has released preliminary data of its Guardian 400, a medium range maritime patrol, SAR (Search and Rescue) and critical infrastructure surveillance and security platform, based on the new Twin Otter Series 400 aircraft.

The Guardian 400 is the cost-effective solution for twenty-first century surveillance, security, sovereignty and search and rescue operations due to the low acquisition and operating costs, while its modern, flexible sensor package will give the customer a mix and match ability to better meet their financial and operational requirements.

Designed for extreme operating environments, the Guardian 400 will include a restricted category increased take-off weight and extended range internal patrol tank, allowing for operational sorties over 10 hours in duration.  In addition, the Guardian 400 will be outfitted with an electro-optical and infrared imaging turret which can be displayed on either the flight deck Honeywell Primus Apex Multi Function Display, or on a separate cabin console.  Other features will include spotter camera, laser range finder and a laser illuminator.

Ideally suited for SAR and maritime patrol, the Guardian 400 will be equipped with 4 crew observation stations, rescue equipment drop hatch, air operable cargo door, search light, and a galley with adjacent lavatory for crew comfort.  Increasing the versatility of the aircraft, the Guardian 400 will be offered on floats, skis or wheels and have 4 wing hard points for additional stores.

“The Twin Otter has been used around the world for decades to carry out special missions due to its ability to operate in challenging environments,” commented David Curtis, Viking president and CEO.  “By offering a customized version of the Series 400 Twin Otter tailored for military and government operations, namely the Guardian 400, Viking is able to provide its customers with a modern and economical solution for their infrastructure requirements.”

The Guardian 400 is based on the Viking Twin Otter Series 400 production aircraft, which features over 400 design improvements to modernize the type and incorporate value added technology.  The introduction of the Honeywell Primus Apex fully integrated avionics suite, uprated Pratt & Whitney PT6A-34/35 engines, and use of composites are just some of the features of the Series 400 that will improve on the already renowned STOL performance.

Twin Otter Series 400 production is underway, with the first four aircraft at Viking’s final assembly facility in Calgary, Alberta, and detailed assemblies for subsequent aircraft progressing through the manufacturing facility at the Victoria, British Columbia location.  The initial flight for the prototype Series 400 technical demonstrator was carried out late last year, and is currently undergoing certification testing.  EASA and Transport Canada certification are expected to be received later this summer.

Viking launched the new DHC-6 Twin Otter Series 400 production program in 2007, and has a current  backlog estimated at over $160M.  Viking provides OEM support for the worldwide fleet of de Havilland heritage line of aircraft (DHC-1 through DHC-7), and is part of Westerkirk Capital Inc., a Canadian private investment firm with substantial holdings in the hospitality, aviation and real estate sectors.