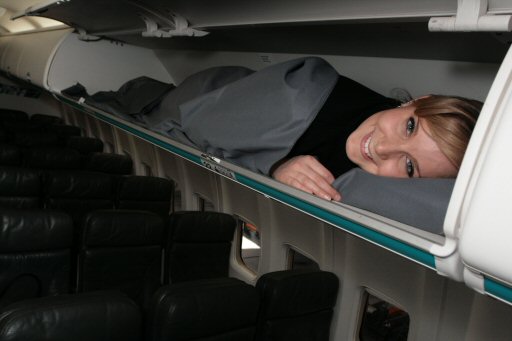 "WestJet now offers scheduled service to 47 destinations,
continuing on our strategy to be Canada's favourite airline," commented
Bob Cummings, Executive Vice-President Guest Experience and Marketing.
"Our leather seats and live satellite television are a great part of
WestJet's guest experience however, by offering our existing overhead
bins as sleeper cabins, guests will now have the opportunity to lie
down for a period of time and arrive at their destination refreshed,
rested and ready to go.

"The overhead compartment has traditionally been a place where
guests have placed their carry-on baggage. Given that the overhead bins
on our fleet are among the most spacious of any airline, we made the
decision to offer sleeper cabins in that space."

WestJet is Canada's leading high-value, low-cost airline offering
scheduled service throughout its 47-city North American and Caribbean
network. Named Canada's most admired corporate culture in 2005, 2006
and 2007, WestJet pioneered low-cost flying in Canada. With increased
legroom and leather seats on its modern fleet of 73 Boeing
Next-Generation 737 aircraft, and live seatback television provided by
Bell ExpressVu, WestJet strives to be the number one choice for
travellers.