In the mid-1990s, the loss of a contract to deliver freight for Canada Post and its Purolator courier subsidiary triggered a company-wide "re-think" at Kelowna Flightcraft. New directions were needed, and a strategy was devised to plug a hole that accounted for over 75 per cent of its revenue. “It was about 1995 that I really had to take a hard look and say, ‘what is it now that Kelowna Flightcraft is going to do,’ ”Barry Lapointe, president and co-founder would later tell Wings. 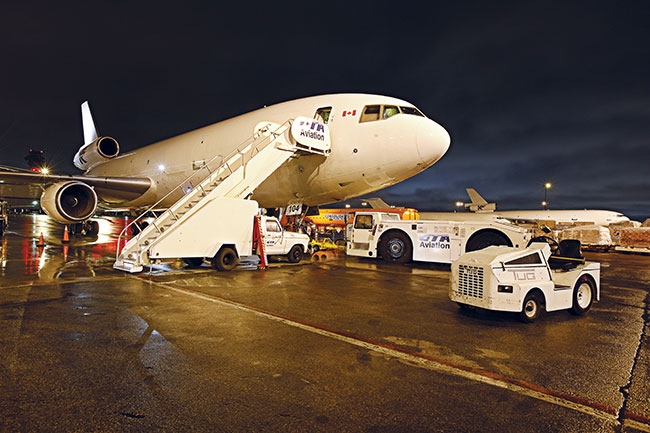 KF Aerospace is the largest private sector company in Kelowna and a source of civic pride. In the mid-1990s

The answer was a diversification strategy that enlarged Flightcraft’s footprint, including a presence in third-party heavy maintenance, military flight training, aircraft leasing and cargo. Fast forward to 2015, and Kelowna Flightcraft is again contemplating a future without another Canada Post/Purolator contract, but with a new name, KF Aerospace, and a more confident outlook.

“It was a very large contract for KF Aerospace, that we didn’t want to see go away,” insists Bryan Akerstream, director of business development. “But we are very well balanced now, so it hurt less than it otherwise would.” KF had already seen the writing on the wall when the post office released the request for proposals (RFP). The contract was not there for KF to win despite a 99 per cent reliability rate. The company opened parallel tracks and bid for the contract while searching for new business opportunities.

“No matter which avenue you arrive at, at KF Aerospace, when you contract with us you are getting the full meal deal,” Akerstream points out. “When pursuing MRO (maintenance, repair and overhaul), we have a fleet of DC-10s and 727s, so we know what it means to have well-maintained aircraft with higher
reliability. When we do military pilot training, we understand what it takes to train pilots and why you need highly training pilots because we operate aircraft, too. And when we want to go flying cargo somewhere, we are also a maintenance company with a significant record of exceptional maintenance, which is why we can operate aircraft at such a high reliability. The reason we are successful in one particular area is because of the backing in all the other areas.”

It’s a message that may have got muddled under the old Kelowna Flightcraft banner; hence the rebrand. “It has been a massive undertaking,” Akerstream says, “and we are not quite done yet.” There were two very distinct issues driving the change: taking the regional aspect out of Kelowna Flightcraft and building an umbrella that covers all parts of the operation. “A lot of people who know where Kelowna is figured that we are a very local company without a very large footprint. We are a very large company spread out across Canada with our aircraft flying globally. We figured keeping that regional focus was not doing us any good.”

KF is the largest private sector company in Kelowna and a source of civic pride. Was there any resistance to taking the Kelowna out of the brand? “More than anything, what this has done is brought recognition to Kelowna because it was a fairly large effort and campaign to rebrand,” Akerstream says. “It brought an understanding to the local population of how big we really are, and what our scope of operation is. If anything it has improved the sense of pride the people of Kelowna can feel with respect to having KF Aerospace raised in their background.”

On May 30, a freshly painted KF Aerospace DC-10 roared out of Toronto’s Pearson International Airport en route to Brussels via Moncton. It was the first of four weekly cargo flights to the Euro-capital, launching “Kelowna’s” return to domestic and international air cargo services, adding an unprecedented amount of freighter space to Canada’s thin air cargo market, overnight.

“Canada is a bit of a unique beast in the sense that there is not a lot of competition. A lot of companies have found unique ways to get their freight from here to Europe or Asia. We are offering a new product that changes that dynamic,” Akerstream says. “We’ve gone into this with our eyes wide open.” Indeed. An internal memo obtained by the Hamilton Spectator outlines: “Unlike our previous contracts with (Purolator and Canada Post), we have no single customer, no guarantee of volumes and no guaranteed revenue.”

The new focus on international cargo has meant a shift to Toronto from neighbouring Hamilton where Kelowna Flightcraft, like WestJet on the passenger side, was one of the modern-day pioneers pulling the John C. Munro Hamilton International Airport out of Pearson’s shadow, operating freight service since 1987, and using the airport for line maintenance.

“We’ve lost our single source of revenue and cargo, and now the majority of the customers we want to fly for are based in Toronto,” Grant Stevens, KF’s director of human resources told the Spectator. “Now we’re trying to break into a new market, so we have to be in Toronto.” Hamilton will continue as a third-party, heavy maintenance base.

KF will operate out of GTA Aviation’s world cargo and ground handling facility to Pearson. GTA, which opened in 2013, wants to position Toronto as a North American cargo hub. Its cargo facility includes specialized controlled temperature rooms at 2-8 and 15-25 degrees, oversized freezer, a large VAL/VUN cage and class one vault, ideal for moving pharmaceuticals and other perishables, which will likely be the bulk of the freight moved by KF.

“We see great potential for YYZ as Canada’s JFK and one of the critical hubs for the movement of cargo,” Gary Ogden, GTA’s vice-president says. “In ground handling, we have brought in a high capacity GSE to provide reliability and scope for anything our customers may carry. KF Aerospace, with their ability to reliably offer specialized freighter services out of Toronto, using [our] facility will propel YYZ into ‘P-1’ for Canada’s cargo.”

Still, with four DC-10s weekly, that is a lot of capacity to fill. “It is a very large amount of volume,” Akerstream admits. “One of the things we were advised on very early is if you really want to have an impact on the supply chain, you have to have a reasonable number of flights. If a product were to miss a flight it can’t sit and wait a full week before it gets on a plane and moves to where it needs to get to. It can possibly wait a day – maybe two – but beyond that, you start losing business.”

The early plan to open the route with just three flights a week was bumped to four at the insistence of the lobster industry in Atlantic Canada, a market that had always figured into the calculation. What was unexpected, however, was a last minute diversion from Halifax to the Greater Moncton International Airport.

“We laboured over that for some time,” Akerstream says. “We were always focused on Halifax. The market is closer to the Halifax airport. Our concern over Halifax was more around the growth of the airport itself and its ability to grow. Certainly there are fantastic people at that airport and another cargo operator might go in there and not see the same obstacles or prioritize them the same way we did. At the end of the day, we were blown away with the attitude of the [Moncton] airport and its focus on growing the cargo market.”

KF has also launched a daily Boeing 727 freighter service between Moncton and Toronto. “When you consider all of the Maritimes and its geographic location, there were just a lot of positive things where Moncton could grow in the future, and the part we could play.”

The loads out of Europe have been stronger than onboard the aircraft leaving Canada. This was not unexpected, and Akerstream says that more and more pallets are finding their way onto the Brussels bound flights out of both Toronto and Moncton. KF has engaged the Kales Group, an Amsterdam-based freight specialist to help fill capacity. Kales recently opened an office in Toronto.

KF Aerospace is the largest private sector company in Kelowna and a source of civic pride.

While increasing capacity may be in the cards, Akerstream does not see KF’s European operation expanding outside of Brussels, a major cargo hub within eight hours trucking distance of three-quarters of the European market. “We fly to Brussels for a couple of reasons,” he says. “One is the lobster side; they have great distribution networks already established into Europe for that market. Brussels is also a significant hub beyond Europe, mainly to Africa. Obviously we are focused on a lot of freight that needs to go beyond Brussels, but our intention is to get Canadian product into Brussels and allow partnerships with other airlines to carry it beyond that.”

This summer, KF will expand its international cargo service to Anchorage, Alaska from Calgary and Vancouver. The goal will be to interline with Asian carriers that will transport the freight to their home markets.

While the company remains focused on the nascent cargo operation, it is not the only new project keeping the night lights burning at KF Aerospace’s Kelowna headquarters. The company is also a partner in Team Spartan, the consortium that is pursuing the Royal Canadian Air Force (RCAF) Fixed Wing Search and Rescue (FWSAR) program, along with Alenia Aermacchi, General Dynamics Canada and DRS Technologies Canada. KF would work with General Dynamics to provide long-term MRO as well as engineering and supply chain support services for a fleet of C-27J search and rescue aircraft across Canada. The bidding process closes in September.

The Brussels and Anchorage flights will help KF to pick up some of the slack left by the loss of the Canada Post contract on the cargo side of the business. The speed with which the aerospace company has entered the international cargo market suggests this has been something KF has been considering for some time. “Certainly we couldn’t have timed this any better,” Akerstream says. “With the federal government signing free trade agreements all over the planet, fuel prices at an all-time low and aircraft that are fully paid for and capitalized. It is the perfect time for us to try and get into international markets.”

By the time the Anchorage service ramps up, KF will have all of its DC-10s and three or four of its 12 parked 727s back in the air. Whether these particular airplanes are the right fit for the new operation remains to be seen. For now, they are providing KF with a sense of what the market can produce from a cargo perspective. It is entirely possible that the company may adjust the mix by adding either a Boeing 747 or 767 on the long haul operation and a 757 or 737-400, depending on if demand requires a step up or small step down from the 727.

“We have our eyes focused on the future,” Akerstream adds. “We are looking at what those different aircraft might be able to provide us from an operational cost perspective. We are on a path we are very happy with. Hopefully two years from now we will be looking back and saying, ‘That was a very positive thing to happen to us, and very timely.’ ”