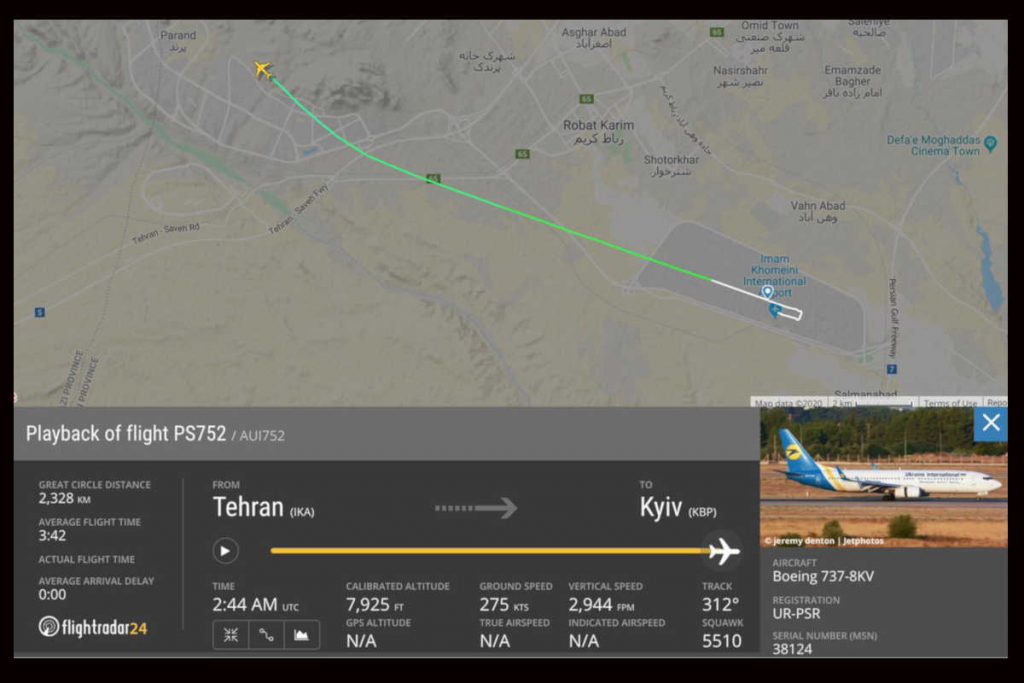 Today on January 8, 2020, Ukraine International Airlines flight PS752 crashed a few minutes after departure from Tehran International Airport in Iran. The flight was heading toward Kyiv, Ukraine, before it disappeared from the radar.

The Boeing 737-800 NG aircraft departed from Tehran International at 06:10 am (Iran local time) carrying 167 passengers and nine crew members, according to a statement from Ukraine International Airlines (UIA), noting this was a preliminary report. UIA subsequently released a list of flight PS752 passengers, but it does not include nationalities, only names and birthdates.

A Tweet by Ukraine’s foreign minister, Vadym Prystaiko, shortly after the crash, which killed everyone on board, initially indicated 63 Canadians were on the aircraft, with the number later updated to 57. An online article published this morning by Karen Bartko of Global News indicates 27 of the Canadians were from the Edmonton area.

Prystaiko Tweeted (translated): “We are currently aware of the following information on the countries of origin of those killed in the crash: Iran 82, Canada [57], Ukraine 2 + 9 (crew), Sweden 10, Afghanistan 4, Germany 3, United Kingdom 3. We express our condolences. The Ukrainian authorities continue to investigate.”

“Tehran airport is anything but a simple one. Therefore, for several years UIA has been using this airport to conduct training on Boeing 737 aircraft aimed at evaluating pilots’ proficiency and ability to act in emergency cases,” said Ihor Sosnovsky, vice president of operations, UIA, in a statement released by the airline expressing condolences to families and friends of the passengers and the crew. “According to our records, the aircraft ascended as high as 2,400 meters. Given the crew’s experience, error probability is minimal. We do not even consider such a chance.”

Following the crash of flight PS752, UIA decided to suspend its flights between Kyiv and Tehran until further notice. The State Aviation Administration of Ukraine also issued a prohibition for flights in Iran’s airspace for all Ukrainian registration aircraft.  UIA also noted the Boeing 737-800 NG aircraft was built in 2016 and delivered directly to the airline from the manufacturer. The last scheduled maintenance of the aircraft took place on January 6, 2020.

By 9:30 am this morning (local time), UIA was working in close cooperation with the aviation authorities to determine the cause of the air accident. This investigation will include the involvement of the aviation authorities of Ukraine, Iran, representatives of Boeing, the airline, and the National Bureau of Air Accidents Investigation of Ukraine.