The David Charles Abramson Memorial (DCAM) Flight Instructor Safety Award is named in honour of Jane and Rikki Abramson’s son, a heroic individual whose life came to a tragic end in 1998. David Abramson’s professionalism as a flight instructor was the inspiration behind this annual recognition of excellence in Canadian flight training. 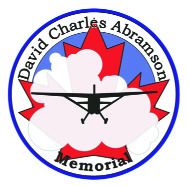 The David Charles Abramson Memorial (DCAM) Flight Instructor Safety Award is named in honour of Jane and Rikki Abramson’s son, a heroic individual whose life came to a tragic end in 1998. David Abramson’s professionalism as a flight instructor was the inspiration behind this annual recognition of excellence in Canadian flight training.

David lost his life while on a routine training flight with a student on July 18, 1998. He was just 24. The Transportation Safety Board report on the accident concluded that:

“… improper maintenance procedures that released the aircraft for flight in an unsafe condition, a missing rudder-bar return spring, and a design anomaly in the rudder stop mechanism contributed to the accident.”

Through his heroic effort that day, his student survived. The Dean for Continuing Education at John Abbott College at that time, Mr. John Watson, reflecting on his experience in pursuit of his private pilot’s licence, offered this endorsement of David’s teaching credentials: “Little did I know at the time that, during the next six months, I would learn more about the personal qualities that make for an outstanding teacher and professional than the last thirty years in the education profession had provided.”

A Journey to Bring Safety Recognition to the Industry

It is fitting that something positive resulted from the accident. As a result of the tragedy, the Cessna modification to the rudder stops on 150/152 aircraft was made mandatory in Canada. There are approximately 1,500 aircraft of this type in Canada, and between 25,000 and 30,000 worldwide.

For Jane and Rikki Abramson, this was “the beginning of a journey to ensure
a positive legacy would remain.” Since its inception in 2003, the DCAM Award has encompassed David’s passion for flight, safety consciousness and mentoring spirit by honouring five dedicated and distinguished instructors from various parts of Canada.

All of these individuals were selected because of their superior teaching skills
and outstanding leadership qualities. Through their demonstrated distinguished performance, they have each shown a real devotion to the advancement of Canadian aviation safety.

The DCAM Award is presented annually by Jane and Rikki Abramson at ATAC’s AGM & Convention, this year to be held in Calgary in November. The winning candidate receives a crystal sculpture of an eagle to take home from the award ceremony, and the recipient’s name is engraved on the prestigious trophy and entered in the associated logbook, both on display at the Canada Aviation Museum in Ottawa. Sponsors of the award include: Air Canada, Flight Safety International, Essential Turbines Inc., Sennheiser Canada Inc., the Canadian Forces Snowbirds and  Wings  magazine.

As a National Award, the DCAM continues to bring flight safety recognition and awareness to the forefront of our industry. In their continual effort to promote the advancement of professional standards, the Abram-sons have provided this important forum for flight instructors to be recognized for their accomplishments in advancing aviation safety. It is Jane and Rikki’s goal that the award will continue to be an inspiration to those in the flight training industry so that similar tragedies will be prevented.

This year’s deadline for award submission is September 14, 2008. Please visit the bilingual Web site, www.dcamaward.com to learn more about this prestigious award.

Celebrating 20 years of instructing at Seneca College in August, 2008, John has instilled a safety culture in his students by incorporating safety goals into every aspect of his training.  His passion for flight, vast amount of knowledge and enthusiasm for teaching have made him a role model.

Prior to Seneca College, Robertson had an extensive 22-year career in the Canadian Military where he received his flight training on the Chipmunk, Beech 18 and the Tutor jet. Operationally, he flew the Grumman Tracker, the T33 Silver Star, the Sea King helicopter and the Tutor, and he finished his military career as Chief Flying Instructor at CFB Moose Jaw on the
Tutor.

Robertson acknowledged the award by saying: “The David Charles Abramson Memorial Flight Instructor Safety Award is significant, not only because it is in honour of a young man, son and dedicated instructor who gave his life doing something that he strongly believed in, it also recognizes the dedication and professionalism of others with similar qualities. To be recognized as such, especially by your peers, is truly an honour and a humbling experience. The benefit of winning this award is the validation that you are providing students with leadership and quality education in today’s ever changing environment, a validation quite different then from renewing or upgrading your instructor rating.  It is in fact food for the soul.”