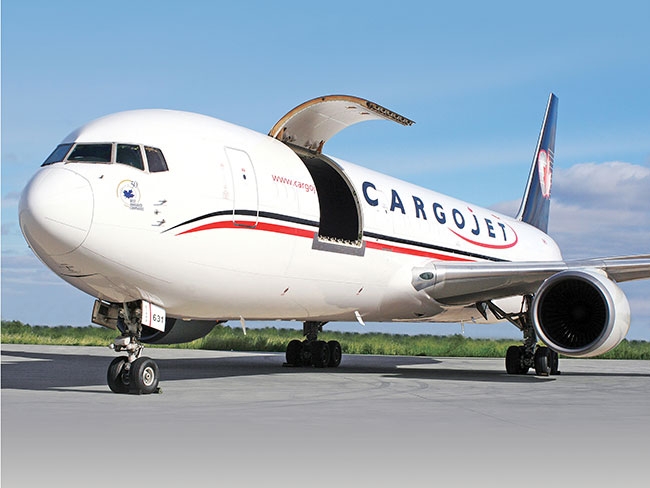 The $18 million loss was mostly attributed to a one-time startup cost related to a contract with Canada Post.

“We are pleased with the financial results achieved in the fourth quarter and full year 2016,” said company president and CEO Ajay Virmani, a Delhi-born businessman with a degree in business from the University of Delhi. “We have grown the business with better utilization of aircraft and through our partnership with Air Canada and by controlling our operating costs.”

Celebrating its 15th anniversary this year, the Mississauga, Ont.-based company delivers more than 1.3 million pounds of time sensitive cargo each week night across North America on a fleet of 23 all-cargo Boeing 767-300F, 767-200F and 757-200ERF aircraft and has worked with Air Canada Cargo to provide deliveries to and from South America.

The company says it has a 98.7 per cent on-time delivery rate.

Time sensitive cargo covers a lot of industries, explained Virmani, including medical supplies, spare parts for the oil and gas industry, perishables and even e-commerce deliveries. Another important part of Cargojet’s business is its interline partnerships with more than 60 of the world’s largest airlines.

“For example, British Airlines will fly a shipment to Toronto and we’ll take it from there to Calgary, its final destination,” he said. “We do a lot of that type of work.”

It also serves the Canadian North from Edmonton, Winnipeg, Ottawa and Montreal through an interline agreement with First Air. As a result, Virmani was pleased that investments to resolve critical transportation needs in Canada’s north and other support to further benefit Indigenous Peoples were announced in the latest federal budget.

“Cargojet is committed to working with the federal government on these and other initiatives that will strengthen the overall safety and security of Canada’s airports, create new jobs for all Canadians and improve the reliability and cost-effectiveness of critical air cargo transportation to Canada’s North,” Virmani said.

Cargojet’s fortunes weren’t always so bright. In July 2001, Virmani initially acquired 50 per cent of Canada 3000 Cargo and bought the remaining half in February 2002 after Canada 3000 declared bankruptcy in early 2002 and renamed it Cargojet.

When Virmani took over, the company had just four aircraft. In addition to its current fleet of 23 aircraft, it now has more than 800 employees, up from 60-plus. It also had $25 million in annual revenues at its inception.

The company also provides international charter flights, but most of the deliveries are made within Canada.

Virmani took a gamble when he purchased the company, but was confident it could succeed.

“I was in the freight-forwarding business at the time, so I was on the other side of the desk,” he said. “I knew there was a demand for an all-cargo airline in Canada. Having used different cargo airlines, I felt the industry was a disaster. But I felt we could make a go of it if we offered a quality service. We were also able to acquire aircraft inexpensively and opportunities opened up. We picked up assets that were undervalued and put together a good and dedicated team.”

The majority of the company’s revenues are generated by providing overnight air cargo services between 14 major Canadian cities, in addition to aircraft handling and aircraft and airport equipment fueling services through its Fixed Base Operations (FBO) business at the John C. Munro Hamilton International Airport.

In 2014, Cargojet was awarded a contract with Canada Post and its Purolator subsidiary which went into effect in April 2015.

The deal is expected to be worth about US$1 billion over seven years, based on current projections. Cargojet also provides cargo services for United Parcel Service Canada (UPS), TransForce, DHL and other major couriers and freight forwarers.

In 2015, the company began cargo flights to Mexico, Colombia, and Peru under a contract with Air Canada, and also began service to Frankfurt, Germany with interline service throughout Europe. The new Air Canada Cargo flight, operated with a Cargojet B767-300 freighter, departs on Saturdays to Frankfurt. This flight will provide connectivity with flights already operating to/from Mexico City and to the recently expanded second frequency per week operated between Canada and Bogota, Columbia and Lima, Peru, which began in mid-October.

Cargojet doesn’t have to hedge against higher fuel prices, since it passes higher fuel costs on to its customers and will also pass along any cost savings. “We also don’t go after retail customers like Apple for business,” Virmani said. “It’s up to our customers to go after new opportunities since we work with them.”

Although it serves 14 domestic locations in addition to Newark, N.J. and Bermuda directly, Cargojet continues to look at growth opportunities in Canada.

“We expect our e-commerce business to grow between 20-30 per cent a year and we will add many more international destinations through our partnership with Air Canada,” Virmani said. “We’re also exploring opportunities, which is rare in Canada, to expand horizontally into third party heavy maintenance since we have the capacity and expertise.”

The fourth quarter is typically the airline’s strongest as deliveries ramp up for the holiday season, noted Virmani, who last year visited all of the company’s bases across Canada to personally thank each one his employees for their contribution to Cargojet’s growth and success.

“The tremendous growth of online shopping by Canadians is definitely contributing to increased demand for Cargojet’s time sensitive overnight air cargo services by all of our customers,” Virmani said. “All of our major customers have given us extremely heavy and challenging peak demands and forecasts. Cargojet’s overnight network is able to expand capacity as demand increases and we are fully prepared to meet our customer’s peak shipping season requirements to ensure all shipments are flown to various destinations to meet holiday deliveries.”

The federal government has introduced legislation to raise the foreign ownership limit of Canadian airlines, including cargo carriers, to 49 per cent from 25 per cent. Despite this new limit, Cargojet shouldn’t be too concerned, according to Toronto-based National Bank analyst Umayr Allem.

“The fact they have a dominant market positions and a number of long-term contracts with major clients will make it hard for a competitor to move into the market, even with the new foreign ownership rules,” Allem said.

One challenge facing Cargojet is the fact that with a dominant market position, making it difficult to squeeze more business out of the domestic market, said Allem.

The company could bump up its charter business, but that sector is “very choppy,” he added. And as suggested by Virmani, it makes sense to offer third-party heavy engine maintenance.

“They have a large fleet,” Allem said. “They should also bring maintenance in house and they have the capacity to offer heavy maintenance to other airlines.”

The company’s revenues were ahead of expectations for the year, but so were expenses as Cargojet tried to keep service levels up during severe weather in the fourth quarter, noted Brian Pow, vice-president, research and equity analyst at Acumen Capital in Calgary.

But apart from that, Cargojet is in good shape financially, as total revenue of $94.1 million in the fourth quarter was up 11.6 per cent from the previous year and ahead of Pow’s estimate of $89.5 million. He forecasts revenue will reach $356.2 million this year and $366.7 million in fiscal 2018. Net earnings should hit $20.8 million and $22.9 million, respectively. In addition, net debt should remain close to its current level of $166.2 million.

Like Allem of National Bank, Pow doesn’t think Cargojet should be concerned about potential competition.

“The barriers to entry are huge,” Pow said. “And look at their market share. It would be tough to chip away at that, particularly with so many long-term contracts. With the small size of the Canadian market, it wouldn’t make a lot of sense for someone like Amazon to fly their own planes.”

As for growth opportunities, the domestic market is limited. Pow expects Cargojet will expand its relationship with Air Canada.

“We continue to expect the next leg of growth to come from the ACMI (aircraft crew, maintenance and insurance) business and charter. In terms of maintenance, they outsource a lot of their fleet maintenance. It would make a lot of sense to bring it in house.”

Cargojet appears to be on path of continued growth for the foreseeable future with nothing but clear skies ahead of it.